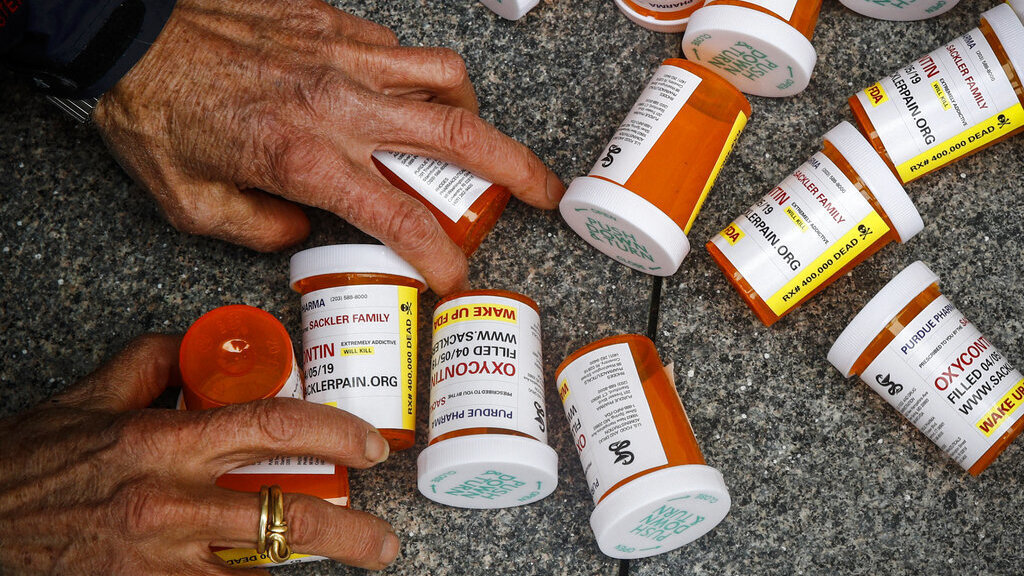 A protester gathers containers that look like OxyContin bottles at an anti-opioid demonstration in front of the U.S. Department of Health and Human Services headquarters in Washington in 2019.

A protester gathers containers that look like OxyContin bottles at an anti-opioid demonstration in front of the U.S. Department of Health and Human Services headquarters in Washington in 2019.

Over the next two weeks, some of the biggest U.S. corporations accused of “turbocharging” the opioid epidemic could finalize payouts to victims and governments worth roughly $32 billion.

“We’ve lost more than a million Americans to this epidemic, and sadly, it’s at an all-time high as overdose deaths continue to rise,” said Texas Attorney General Ken Paxton last week, in a statement announcing his state is now in line to receive roughly $1.1 billion.

Paxton said pharmaceutical companies that made, distributed and sold opioids were “at the root of the problem.” Their payments will help fund “treatment for those currently still struggling with opioid addiction,” he added.

This comes as communities across the U.S. are scrambling for resources to combat an opioid crisis that keeps getting worse.

Drug overdoses killed more than 104,000 Americans in the most recent 12-month period for which data is available, according to the Centers for Disease Control and Prevention. That’s a tragic new record for the U.S.

The four firms, which maintain they did nothing wrong, have tentatively agreed to payouts totaling $26 billion. The Texas money would come from that deal, as would roughly $590 million that would go to Native American tribes.

Sources directly involved in the negotiation tell NPR that a final settlement plan involving most of the 50 states, local governments and victims could be announced as early as Friday.

The other intense negotiation involves Purdue Pharma, maker of Oxycontin, and its owners, members of the Sackler family.

In a report released last week, Judge Shelley Chapman, who is mediating the talks, described accelerating shuttle diplomacy among dozens of parties.

She concluded there was “substantial progress” toward a deal now worth as much as $6 billion.

While they say they’ve done nothing wrong, the Sacklers and their privately owned company have faced a growing public backlash for their alleged role pushing to boost sales of opioid pain medications despite surging rates of addiction and overdose death.

Cars pass Purdue Pharma headquarters, Sept. 12, 2019, in Stamford, Conn. A federal mediator is expected to announce Wednesday, Feb. 16, 2022 or Thursday whether Purdue Pharma and a group of holdout state attorneys general have been able to reach a new settlement in the OxyContin maker’s bankruptcy case.

Cars pass Purdue Pharma headquarters, Sept. 12, 2019, in Stamford, Conn. A federal mediator is expected to announce Wednesday, Feb. 16, 2022 or Thursday whether Purdue Pharma and a group of holdout state attorneys general have been able to reach a new settlement in the OxyContin maker’s bankruptcy case.

An earlier settlement, struck last year as part of Purdue Pharma’s bankruptcy proceeding, would have meant a payout of roughly $4.5 billion. That deal was rejected in December 2021 by a federal judge.

Closed-door talks quickly resumed and in her Feb. 18 report Chapman revealed Purdue Pharma and the Sacklers had boosted their payout offer to “not less than $5.5 billion and up to $6 billion.”

In exchange, the Sacklers are still demanding total “release” from all future opioid liability. That means members of the family who ran the company could never be sued in the future for their role pushing Oxycontin sales.

It’s unclear how many states that once opposed the deal will sign on in response to the sweetened offer. In her report, Chapman said, “the unanimous acceptance” demanded by the Sacklers “has not been achieved.”

There is also growing criticism from some victims of the opioid crisis, people who became addicted to prescription medications and families who lost loved ones to fatal overdoses.

They say the overwhelming majority of cash from these deals will go to reducing future addiction and death, with relatively small payouts to those already harmed.

But supporters of these settlements maintain they are the quickest way to resolve a legal morass while directing as much money as possible to easing one of the deadliest manmade public health crises in U.S. history.

While much smaller than the $246 billion Big Tobacco settlement of the 1990s, these corporate opioid deals do include similar provisions restricting companies’ future opioid practices.

The goal is to reform the way the highly addictive medications are marketed and sold. Overall prescribing of opioids has declined sharply in much of the country in recent years.

Even if these deals are struck, lawsuits will continue against some of the largest companies that sold opioid pain medications.

The major pharmacy chains, including CVS, Walgreens, and Walmart, also deny any wrongdoing and have so far refused to negotiate similar settlements.

Federal Judge Dan Polster hasn’t yet determined what damages the companies will have to pay. The pharmacy chains have promised to appeal.