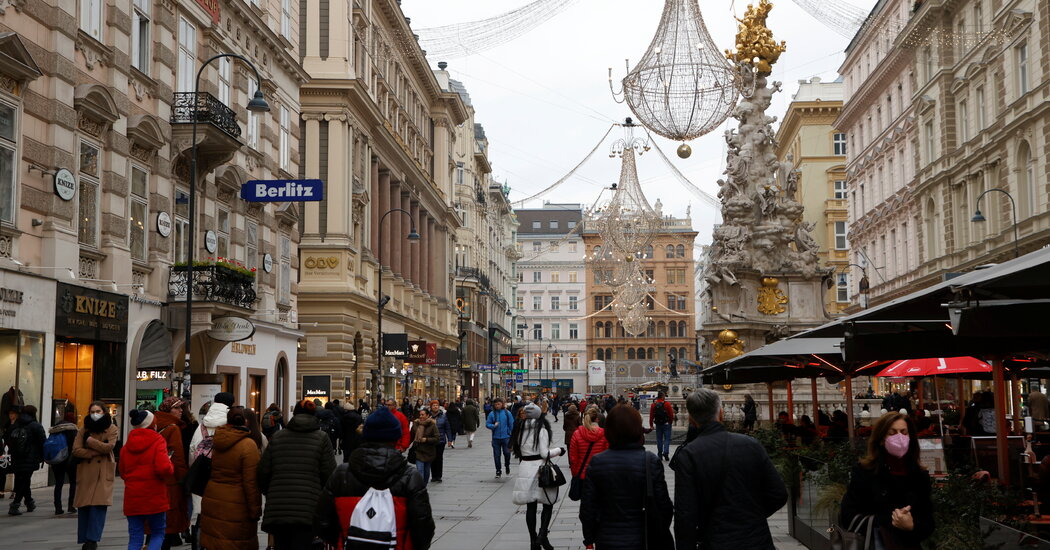 Austria will go into a nationwide lockdown on Monday and impose a coronavirus vaccination mandate next February as a spike in infections risks overburdening the country’s hospitals, Chancellor Alexander Schallenberg said on Friday.

It is the first such lockdown in a European nation since the spring, and the first national vaccine mandate on the continent.

“Nobody wants a lockdown — the lockdown is the very last resort, a crude instrument,” Health Minister Wolfgang Mückstein said. “A lockdown is always an imposition, but it is the most reliable instrument we have to break this fourth wave.”

Most aspects of public life in Austria will be suspended for at least 10 days under the lockdown, which will affect both vaccinated and unvaccinated people.

The measures, reminiscent of those that European nations put into place before vaccines were available, follow other recent restrictions — including a lockdown for unvaccinated people and planned lockdowns in two states — that have done little to lower the rate of infection.

Under the new rules, people will be allowed to leave their homes only for vital purposes such as shopping for groceries, going to work or getting a basic level of exercise. Only supermarkets and stores selling essentials will be allowed to remain open.

The country, which registered 14,212 new coronavirus cases in 24 hours on Thursday, has one of Europe’s highest national infection rates.

Austria also has one of the lowest vaccination rates in Europe, with 66 percent of the population fully inoculated.

“For a long time, the political consensus has been that we do not want compulsory vaccinations in this country,” Mr. Schallenberg said when announcing the new measures. “But we have to face reality.”

Cambodia reopened for fully vaccinated tourists from overseas this week without quarantine after a nationwide campaign succeeded in achieving one of the world’s highest vaccination rates.

The move was welcomed by desperate tourism operators and workers, who have struggled to make a living since the start of the pandemic.

“I rejoice at and fully support the news of reopening the country to vaccinated tourists without quarantine,” said Chhay Sivlin, the president of the Cambodia Association of Travel Agents. Tourism directly accounted for more than 12 percent of the country’s economy in 2019 and provided jobs to 630,000 people, she said.

Last month, the Southeast Asian nation of about 16 million announced plans to let fully vaccinated foreign tourists begin entering the country at the end of November if they first quarantined in selected areas for five days.

But citing the rapid pace of inoculations and a vaccination rate of 88 percent, Prime Minister Hun Sen accelerated that plan and said that fully vaccinated tourists could arrive without quarantine, effective on Monday.

“This is a big step towards reopening the entire country,” said Mr. Hun Sen, an authoritarian leader who came to power in 1984. “I hope our compatriots enjoy our reopening. It is widely due to the country having achieved such an outstanding rate of vaccination.”

More than two million people have received a third dose.

Under the new rules, travelers arriving from abroad can skip quarantine if they are fully vaccinated, test negative for the virus before departure and test negative again on arrival. Travelers who are not vaccinated must still spend 14 days in quarantine.

Ms. Sivlin said that tourist bookings were beginning to pick up and that airlines were working to increase the number of flights to Cambodia.

Some flights are scheduled to the capital, Phnom Penh, but none for Siem Reap, the town near the ancient city of Angkor that is one of the most popular destinations in Southeast Asia.

Like many of its neighbors, Cambodia reported relatively few virus cases in 2020 but faced a deadly surge this year. Still, its overall numbers have remained relatively low, with about 120,000 total cases and 2,900 deaths.