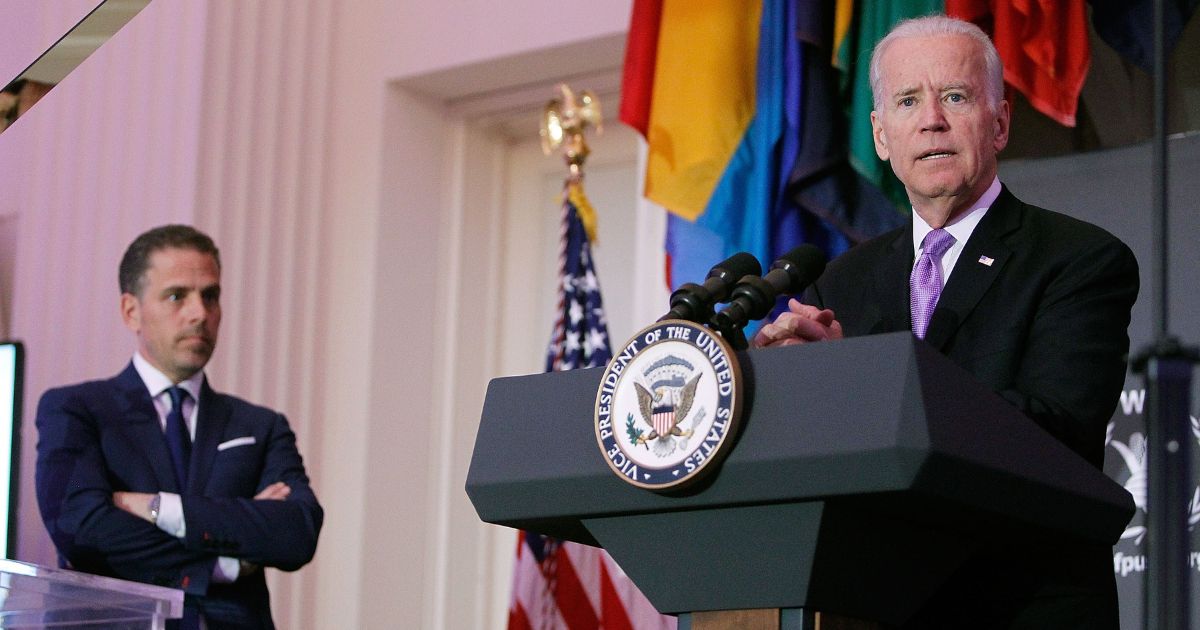 On the 2020 campaign trail, Joe Biden insisted he had never talked to son Hunter about his overseas business dealings in places such as Ukraine and China.

All right, then: Why did 14 of Hunter Biden’s business associates meet with Joe Biden during the time when he was vice president in the Obama administration?

According to a report from Fox News on Thursday, over a dozen individuals doing business with the wayward son of the current president when he was veep had meetings with Joe between 2009 and 2017 — including individuals from the United States, China, Kazakhstan, Mexico and Ukraine.

(At The Western Journal, we’ve been busy connecting the dots between Hunter Biden’s influence-peddling and Joe Biden’s vice presidency for some time now — and we’ll continue to bring America the truth the mainstream media won’t. You can help by subscribing.)

“I have never spoken to my son about his overseas business dealings,” Biden told reporters during a campaign stop in Iowa in 2019.

That statement was already dubious before a voicemail archived on Hunter Biden’s laptop indicated Joe had talked with his son about a New York Times piece on CEFC that mentioned Hunter’s involvement.

Biden told his son he had read the piece and that “I think you’re clear.”

Do you think Joe Biden lied about his involvement in his son’s business dealings?

Even if you believe the answer to that question is no, I think you might agree it would be nice to know at least 14 of Hunter’s business associates got meetings with Joe Biden while he was vice president. That’s the number Fox News could corroborate via Obama White House visitor logs and emails.

For instance: “Two of Hunter’s Mexican business associates, Miguel Aleman Velasco and Miguel Aleman Magnani visited the West Wing on Feb. 26, 2014, according to the Obama White House visitor logs, and Joe was later photographed with Hunter giving Velasco and Magnani a tour of the White House Brady Press Briefing room,” the report said.

“Emails, which were reviewed by Fox News Digital, from more than a year later showed that Hunter arranged a video conference with his father and Carlos Slim, a Mexican billionaire with whom Hunter was seeking to do business with at the time, on Oct. 30, 2015.

“Less than a month after the video conference, Slim, Velasco and Magnani attended a meeting with Joe, Hunter, and Hunter’s business partner and family friend Jeff Cooper at the vice presidential residence at Number One Observatory Circle, Washington D.C., according to photos dated Nov. 19, 2015 and published by The Daily Mail.”

This was during a period when Hunter and Jeff Cooper were pursuing an investment in a Mexican energy company with the three Mexican magnates. Slim, it’s worth noting, is currently the 12th-richest man in the world, according to Forbes — wealthier than Facebook co-founder Mark Zuckerberg — and certainly the most famous business magnate in all of Central America.

Fast Food Is Slipping Out of Many Americans’ Price Range

Are we to assume that no discussion went on about why Hunter was bringing one of the most famous billionaires in the world to the vice presidential residence? Nothing like: “Say, uh, son, how do you and Carlos Slim know each other? Golfing buddies? In a fantasy football league together?”

That’s something I’d probably want to know if I were the vice president — and if Joe Biden didn’t pursue that conversation, that’s being willfully negligent about potential influence-peddling on the part of his son for the purposes of plausible deniability. That’s worse than having a conversation with Hunter about his foreign business dealings.

Then there was a dinner at Café Milano in Washington on April 16, 2015. As meet-and-greets with Hunter’s foreign friends go, this was a truly international affair: Business associates from Kazakhstan, Russia and Ukraine were present, Fox News reported.

The dinner included the late Moscow Mayor Yury Luzhkov and his wife, Russian billionaire Yelena Baturina. The latter is more important, given that she was in business with Hunter’s firm.

Then there was Vadym Pozharskyi, an executive at Burisma, the Ukrainian firm which employed Hunter as a board member.

Finally, we have former Kazakhstan Prime Minister Karim Massimov and Kazakh businessman Kenes Rakishev. On the guest list for the event, they were potentially described as “our KZ friends” — and, indeed, Hunter would hope they would be good friends, considering he was trying to put together a deal with a Kazakh-based Chinese energy company and Burisma at the time.

Another business partner of Hunter’s who met with Joe, albeit after he left the vice presidency? Tony Bobulinski. You may remember him as the partner in the CEFC deal who said that a cryptic reference to equity in the deal being held for “the big guy” referred to Joe Biden.

“Text messages obtained by Fox News Digital indicated that a meeting took place, though it’s unclear what the substance of the meeting may have been,” the outlet reported.

“Great to meet u and spend some time together, please thank Joe for his time, was great to talk thx Tony b,” read one text from Bobulinski to Joe’s brother Jim on May 2, 2017.

Ironic, then, that Fox News’ report appeared just one day after the New York Post broke a story that the same business partner who made the reference to “the big guy” receiving equity in the email about the CEFC deal also referred to Joe Biden as “the Big Guy” in frantic text messages sent on the day the Post broke the story about Hunter Biden’s laptop in October 2020.

James Gilliar, the man who sent “the big guy” email, was asked in a text exchange if “Hunter and/or Joe or Joe’s campaign [would] try to make it ‘Oh, we were never involved’ … and try to basically make us collateral damage?”

“I don’t see how that would work for them… I think in the scenario that he wins they would just leave sleeping dogs lie,” Gilliar responded.

Then: “If they lose, honestly, I don’t think that the Big Guy really cares about that because he’ll be too busy focusing on all the other s*** he is doing.”

Bobulinski insisted from the beginning that Gilliar was referring to Biden — and given Gilliar used the same language to refer to him in a separate text exchange, that certainly lends credibility to Bobulinski’s account of the tangled affair of Hunter Biden’s blatant influence-peddling and how close Joe was to it.

Thus, consider what Bobulinski had to say about the matter in October 2020: “I’ve seen Vice President Biden saying he never talked to Hunter about his business. I’ve seen firsthand that that’s not true, because it wasn’t just Hunter’s business, they said they were putting the Biden family name and its legacy on the line.”

They certainly were — and now things aren’t looking so hot for “the big guy” or his son.