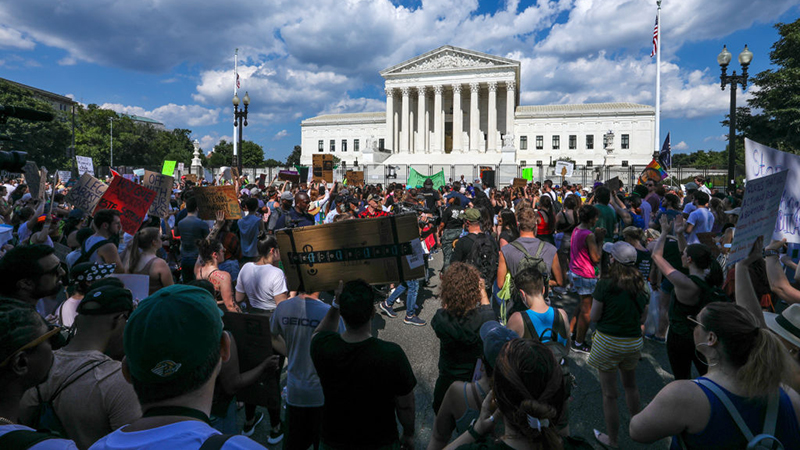 Democrats are seething with rage over Friday’s 6-3 majority decision by the US Supreme Court to overturn Roe v. Wade, sending the question of abortion rights back to the state-level.

“The Constitution does not confer a right to abortion; Roe and Casey are overruled; and the authority to regulate abortion is returned to the people and their elected representatives,” read the opinion, written by Justice Samuel Alito.

Pro-abortion protesters sprung to action, deploying posters which read “Bans off my Body” and other slogans.

Hours after the news broke, Rep. Alexandria Ocasio-Cortez (D-NY) called the decision “illegitimate,” and encouraged people to get “into the streets” to protest.

Her call for what we’re sure will be ‘mostly peaceful’ protests prompted Rep. Marjorie Taylor Greene (R-GA) to accuse the Democrat of ‘launching an insurrection,’ adding “Any violence and rioting is a direct result of Democrat marching orders.”

“I will explain this to you slowly: exercising our right to protest is not obstruction of Congress nor an attempt to overturn democracy,” AOC replied, to which Greene asked AOC why she won’t support pardons for Julian Assange or Edward Snowden, why she is “a shill for the MIC (military industrial complex) funding war in Ukraine,” or “are you too busy organizing baby killing riots?”

Behind the carnival tent curtain, DC insiders are furious and are demanding that the Biden administration DO SOMETHING!

“It’s infuriating. What the hell have we been doing?” one Democratic strategist told The Hill. “Why are we not talking about this every single day? Why hasn’t Biden made this the issue for Democrats? If we don’t step up, we’ve got ourselves to blame.“

Since a leaked draft of the gut-punching Supreme Court opinion surfaced in early May, Democrats have said they wanted to see more guidance from Biden. But the president has been consumed by domestic issues including record-high inflation and the latest mass shootings in the country, in addition to Russia’s war in Ukraine.

Democrats say Biden must do more to lead and fire up the base if he hopes to get Democrats to turn out this fall.

“A more forceful stance would be welcome from the rank and file,” said William Galston, who chairs the Brookings Institution’s governance studies program. -The Hill

On Friday, Biden delivered a weak address from the White House, at one point struggling to find the words to describe the moment before spitting out: “It’s a – it just – it just stuns me,” even though the Supreme Court decision leaked on May 2 and everybody knew this was likely coming.

And what is Biden’s solution? After acknowledging that he’s ‘severely limited’ in what he can do as president, he encouraged Democrats to vote for pro-abortion candidates in November’s midterms that would make it possible to pass a ‘right to abortion’ law.

Former President Obama, who in 2009 said that legislation to codify abortion rights into federal law was ‘not the highest legislative priority’ – tweeted: “Today, the Supreme Court not only reversed nearly 50 years of precedent, it relegated the most intensely personal decision someone can make to the whims of politicians and ideologues—attacking the essential freedoms of millions of Americans.”

Democratic strategist Joel Payne said, very strategically: “What’s challenging for the president is that all the other domestic challenges have prevented him from having the political capital to galvanize the base in a moment like this.”

“Because of Donald Trump, Mitch McConnell, the Republican Party & their supermajority on the Supreme Court, American women today have less freedom than their mothers. Radical Republicans are now charging ahead with their crusade to criminalize health freedom.” Of course, unborn American children have more protections than they’ve had in 50 years.

Senate majority leader Chuck Schumer (D-NY) called the decision “one of the darkest days our country has ever seen.”

And the Attorney General, Merrick Gardland, got extremely political, saying in an official statement: “The Justice Department strongly disagrees with this Court’s decision. This decision deals a devastating blow to reproductive freedom in the United States.”

Another Democratic strategist suggested that failure to employ Kamala Harris as the face of the White House’s pro-abortion stance is a huge mistake.

“How great would that have been?” the anonymous strategist asked rhetorically. “Why aren’t we deploying someone who understands and could speak to this moment from the heart?”

According to HIT Strategies’ chief researcher Roshni Nedungadi, 75% of young voters 18-34 years-old want abortion rights protected and don’t believe Democrats are doing enough to fight back on the issue.

“They feel that they need to see Democrats and the White House fighting for them,” she said, adding “I really think as many voices as they can have, saying the same thing over and over again.”

The question for November; can Democrats rally the base around the right abort an unborn child, after a summer of ‘mostly peaceful protests’?