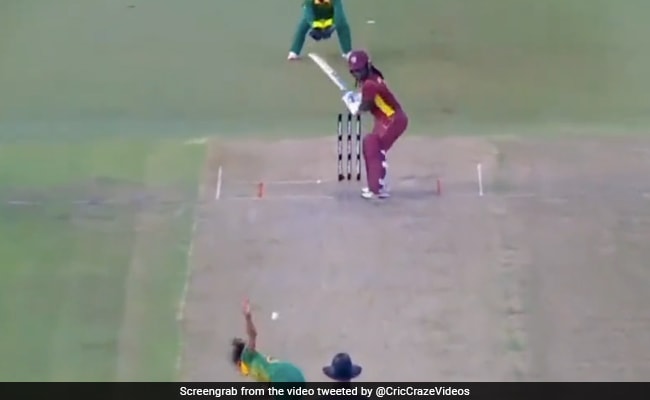 Deandra Dottin batting in the Super Over vs South Africa

The rain-affected second ODI between West Indies women and South Africa women was largely dominated by the bowlers barring the one-over eliminator. The match in Johannesburg went into a Super Over after both West Indies and South Africa were bowled out for 160 in 41-over-a-side match. But what transpired in those two overs was nothing short of outstanding. West Indies batters Deandra Dottin and Hayley Matthews smashed 25 runs off Shabnim Ismail’s Super Over, the same bowler who had an economy rate of 3.65 in the allotted overs earlier.

Dottin started the Super Over with a couple towards deep mid-wicket and then played a lovely ramp shot off the next ball to collect the her first boundary.

With six runs off two balls, Ismail needed to come up with something special to stop Dottin’s rampage but that didn’t happen. The veteran West Indies right-hander, made room and smashed Ismail straight over head for the second boundary and followed that up with a six over long on.

Ismail went wide for the penultimate ball. Dottin still made a good enough connection, which allowed them to run three.

There was no respite for the experienced South Africa medium pacer as Matthews smashed the last ball of the Super Over for a six.

West Indies finished with 25. Dottin was unbeaten on 19 off 5 balls while Matthews scored 6 off 1 ball.

In reply, South Africa did not fare too badly either. Their batters Tazmin Brits and Chloe Tryon tried their best but fell short by 8 runs. West Indies ended up winning the match via Super Over.

Ayabonga Khaka then made life difficult for the West Indies batters in the chase. Khaka picked up five for 26 in her 8 overs to help South Africa bowl the visitors out for 160.