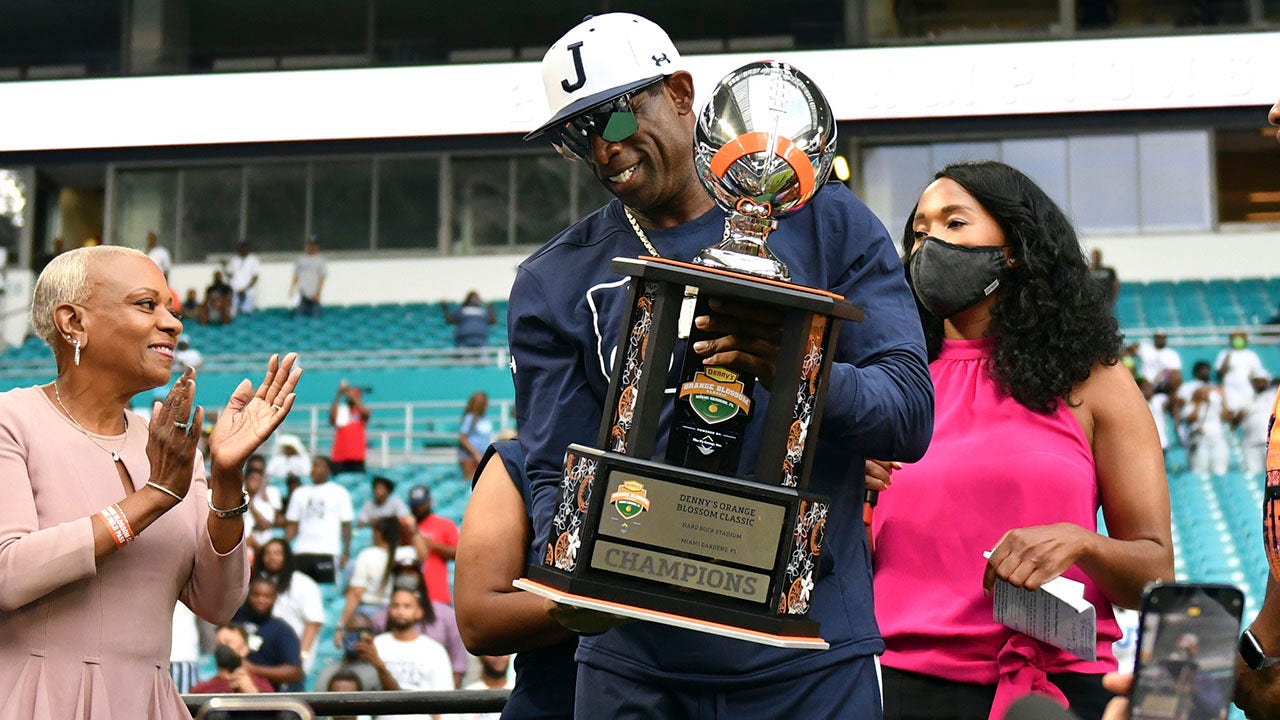 For Deion Sanders, being the head coach of Jackson State’s football team is a blessing.

Sanders, a two-time Super Bowl champion regarded as one of the NFL’s all-time greats, says he feels at home coaching the Tigers because he believes coaching was what he was “built and designed to do.” The former NFL Network analyst says being a personality on television is a thing of the past, and he’s at peace with the process because it helped him get to where he is today.

Jackson State will next take on MEAC champion South Carolina State in the Celebration Bowl Dec. 18 in Atlanta for the Black college national championship.

TOP COLLEGE RECRUIT COMMITS TO JACKSON STATE, DEION SANDERS: ‘I GOT A CHANCE TO MAKE A CHANGE IN HISTORY’

On Wednesday, Sanders made a splash by winning a commitment from Travis Hunter, the No. 1 high school football recruit in the nation, to play for him at Jackson State. It was a shocker because Hunter had verbally committed to Sanders’ alma mater, Florida State, months ago.

“I got a one-in-lifetime chance to play for one of the greats,” Hunter told WXIA-TV in Atlanta after making his announcement on Wednesday. “I got a chance to make a change in history.”

Sanders said last week that Jackson State needs to “go outside the box” when it comes to recruiting top high school athletes because he isn’t able to offer the same things Power 5 schools have.

“Sometimes we need to use the foolish things to confound the wise,” Sanders explained before Hunter flipped commitments. “We really do. We can’t do what they are capable of doing financially for these young men and women. But we can be honest and straightforward and instill hope. Give them a product of excellence and a commitment to excellence.

“Instagram, you can’t beat us on there,” Sanders continued. “You can’t beat us at showing who we are and what we are about. And if a kid makes it to the point where I can sit down with him, his mom or his father, or a family member, it’s a wrap. I know what I bring to the table. I know what I’m going to speak into their lives. And I know if mother sits down with me or grandma, I know we are going to get that kid. I’m just that confident in what we do and how much we love them. How much we connect with them. How much we want them to succeed and go to the next level. And how much we care. It’s not just about X’s and O’s here, it’s about these guys being professionals. And I think they really feel that across the television, across social media and I think we embody that.”

Jackson State football coach Deion Sanders smiles as he greets his defensive squad after it recovered a Mississippi Valley State fumble for a touchdown during the second half Sunday, March 14, 2021, in Jackson, Miss.
(AP Photo/Rogelio V. Solis)

The reason Sanders is so confident is that he offers himself to kids, something he wishes he had during his playing days at Florida State.

“I wouldn’t have made some of the mistakes personally that I made off the field. On the field, I didn’t need any of that. Off the field, some of the decisions I made once I began to be older, that’s when a coach like me could have been so much more promising,” Sanders said. “You really respect a coach for who they are, what they are, how they are and the path they’ve traveled. And looking at me, coaching me, I would’ve had the ultimate respect because I’ve been there and done that. And listening to a man who’s been there and done that, it would have been tremendous.

“It would have been a tremendous asset for me. I wish I would have had that, but now I’m giving that back. I’m returning that to the young men that I’m responsible for right now.”

Recently, Sanders partnered with Gillette to create the limited-edition Gillette x Deion razor in time for the holidays. From Dec. 7-20, Gillette will donate $1 to the JSU Tiger Athletic Foundation for anyone who entered Gillette’s free online giveaway