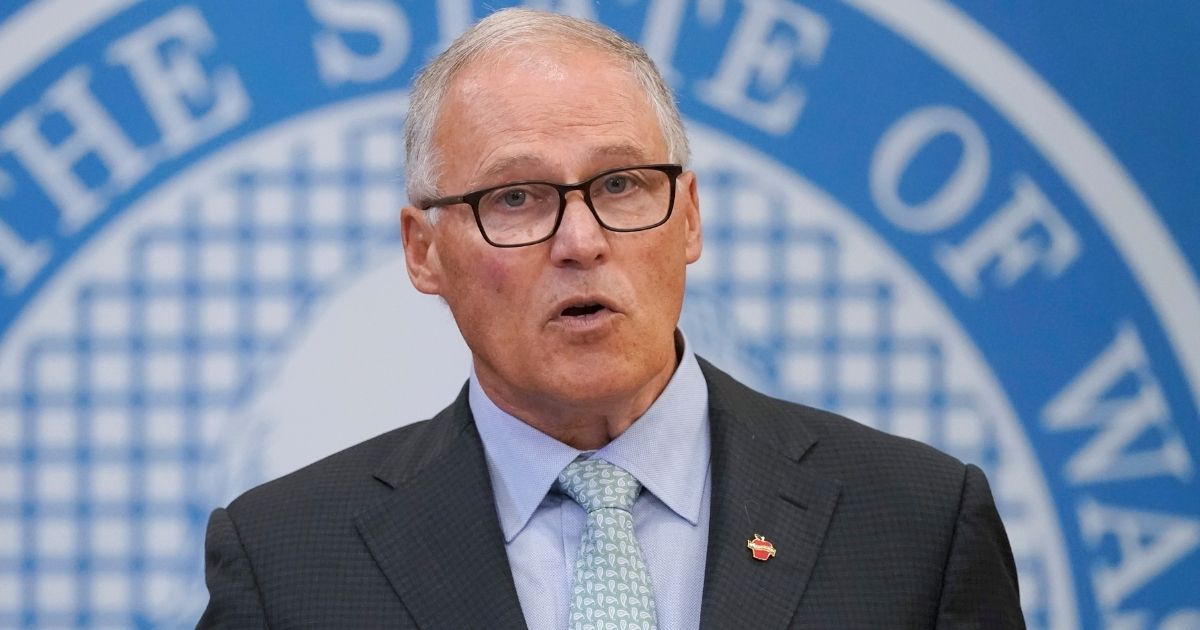 Democratic Washington Gov. Jay Inslee, a 2020 presidential candidate, has decided he wants to criminalize lying — but only if it involves the declared outcome of elections.

According to the Seattle Times, Inslee used the anniversary of the Jan. 6, 2021, Capitol incursion on Thursday to call on state lawmakers to pass legislation which would make lying about election results a gross misdemeanor — warning that without it, “a continuing coup” by former President Donald Trump could represent a danger to the state’s electoral system.

Inslee’s rhetoric wasn’t even the most overheated, febrile stuff we heard on Thursday — and we heard plenty of it from the Democrats. While the mainstream media was more than willing to echo left-wing talking points this week, The Western Journal continued reminding readers what really happened on Jan. 6, and we’ll continue to put those events in proper perspective. You can help us by subscribing.

Inslee, speaking in the state capital of Olympia, said the former president “is still intent on continuing this coup effort.”

“And we have to realize, unfortunately, it’s not just in other states; it is right here in Washington state, this ongoing effort,” he added.

The crime would be a gross misdemeanor, meaning it could land someone in jail for up to 364 days. They could also be fined up to $5,000.

“It should not be legal in the state of Washington for elected officials or candidates for office to willfully lie about these election results,” Inslee claimed.

During an interview later that day, he added that for the lying to constitute a gross misdemeanor, there would have to be “knowledge that there’s potential to create violence.”

Do you think Gov. Inslee’s proposed legislation is preposterous?

Yes, it’s true, Jan. 6 was turned into a grotesque, perverse sort of holiday for Democratic politicians, allowing them to make pronouncements, promises and portents about the Republican Party as if a solemn anniversary of an ugly event was a paid political advertisement.

The thing is, Inslee and Washington state Democrats plan on following through on this, with a bill currently being drafted. The aim appears to be to have it considered during the state’s upcoming 60-day legislative session, which begins Monday. This bit of grandstanding will have real-world consequences for years to come — if Inslee gets his way.

Now, I’m sure you’re thinking what Clippy, the Microsoft Office paperclip, is thinking here in this tweet by National Review’s Dan McLaughlin:

Flashback: Hillary Clinton Gave Biden Advice That Would Have Leftists Fuming If Trump Used It

Indeed, the Washington State Supreme Court rejected a previous law which barred deliberate lies about political opponents by candidates. In a 5-4 decision in 2007, former Justice James Johnson called the law a “censorious scheme” and said, “The notion that the government, rather than the people, may be the final arbiter of truth in political debate is fundamentally at odds with the First Amendment.”

Inslee believes it won’t run into problems this time, however, because of that caveat involving the “knowledge that there’s potential to create violence.” George Washington University law professor and constitutional scholar Jonathan Turley, however, thinks that’s bunk.

“What does that even mean?” Turley wrote in a Saturday piece. “Any prosecutor could allege that a claim of election fraud was inviting another ‘Jan. 6th insurrection.’ The claim itself would be treated as incitement. Indeed, this seems like an effort to evade the constitutional limits placed on incitement crimes by the courts.”

“In this law, questioning elections (rather than calling for violence) would be treated as a crime based on its ‘potential for violence.’ It would, in my view, be dangerously and flagrantly unconstitutional,” he added. “The ‘knowledge of the potential of violence’ is such a nonsensical standard that it only magnifies the threat to free speech — and the underlying political motivation — in such legislation. Would such knowledge be shown by making the claim in a rally or protest? Would it depend on the actions of third parties or prior violent protests?”

And that’s just the problematic nature of the clause Inslee is using in an attempt to get this to pass constitutional muster. A “lie” as it pertains to elections, too, is whatever the state says it is, no matter how the legislation is written. One need not defend Donald Trump’s actions in the aftermath of the 2020 presidential race to realize the inherent danger in criminalizing a public challenge to election results.

Perhaps Inslee’s proposed legislation dies where it deserves to: at the podium where the governor announced it. If it doesn’t, one hopes it’ll die a quick death in the legislature or courts. (And if that’s not the case, heaven help us all.)

The fact this blatant fusillade against the First Amendment was even proposed, however, ought to be the frightening element of l’affaire Inslee. The Washington governor spoke about “a continuing coup” by Donald Trump, presumably aimed at our democracy and our freedoms. To fight this, he says, he’s prepared to chip away at the amendment that’s the bedrock of our democracy and our freedoms.

Of all the hyperbolized threats we heard from the left last week, this may have been the most pernicious.