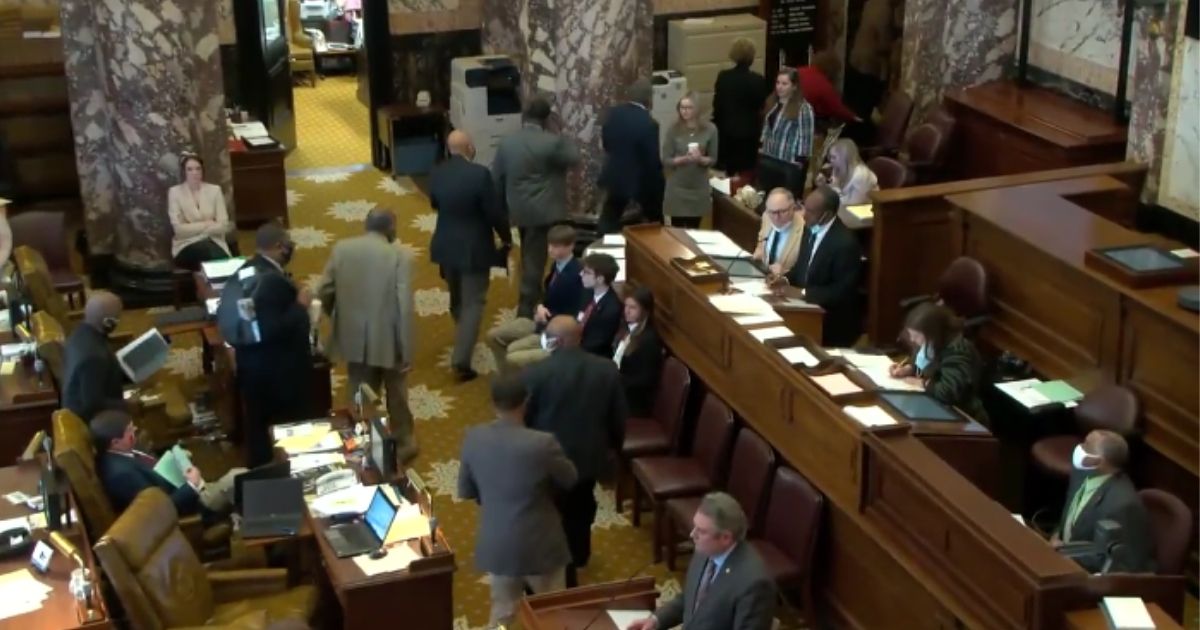 Every one of Mississippi’s black state senators walked out of the Senate chamber on Friday to protest a bill that would ban the teaching of critical race theory in the Magnolia State’s schools.

The bill, put forward by Republican state Sen. Michael McLendon, is aimed at ensuring that children are not taught that the color of their skin makes them inferior.

Democrats, on the other hand, argued that the measure is moot because critical race theory is not taught in schools to begin with and might prevent aspects of the state’s history from being covered in classrooms.

“It is sad we are wasting so much time on something that is not even needed,” said Democratic state Sen. David Jordan, according to The Hill.

WALKING OUT: Mississippi’s Black Senators walked out of legislature to protest a bill that would ban critical race theory. https://t.co/BgRYSlTEPz pic.twitter.com/ulRck3UtRy

Meanwhile, Republicans like McLendon said Mississippi parents are seeing discussions of critical race theory “on the national news” and need to be reassured that their children aren’t being taught that their race determines their worth.

Sen. Chris McDaniel noted that if the bill had been introduced in the 1950s, it would have been the “most dynamic piece of civil rights legislation in this state’s history.”

Should critical race theory be banned from schools?

“I’m trying to find the mischief in this bill and I don’t see it,” he said, according to WLBT. “Our kids need objective facts and not subjective notions of theory.”

The legislation states that no public school, district or charter school may “direct or compel students to affirm that any sex, race, ethnicity, religion or national origin is inherently superior, or that individuals should be adversely treated based on such characteristics.”

That’s something you’d think absolutely no one would disagree with, but here we are.

Critical race theory is not merely a frank, honest examination of race and racism as so many of its proponents assert, but rather the idea that there is an intrinsic tendency toward racism in the heart of every white person, which is both wrong and, well, incredibly racist.

The vast majority of Americans no doubt emphatically agree that children must learn the history of racism in this country. The problem is CRT’s decidedly ideological approach to race and the deliberate focus on white students and the “privilege” they are required to repent of.

In the words of one of the most inspiring Americans who ever lived as well as one of the greatest black figures in our nation’s history, Booker T. Washington, “No greater injury can be done to any youth than to let him feel that because he belongs to this or that race he will be advanced in life regardless of his own merits or efforts.”

How can we remain honest and true to our great history of racial progress and civil rights without remaining steadfastly committed to the notion that we are all equal on the basis of our humanity, rather than distinct from one another on the basis of our race?

Countless white Americans worked alongside former slaves and free black men and women alike to end slavery, and they were driven by their conscience, not the color of their skin. In the same manner, the white people who worked to preserve slavery were driven by their own broken moral compass, not an inborn trait of racism intrinsically linked to the amount of melanin in their skin.

It is wildly offensive to the many freedom fighters who have gone before us to teach children that their skin color is inextricably tied to their moral fiber.

Do you know who believes rot like that? Legitimate racists, that’s who.

Human beings are fallen and sinful, every single one of us — the black captors who sold their fellow Africans into slavery as well as the white landowners who happily treated human beings like farm animals to build their own wealth and then tried to tear apart our great country to preserve the practice.

Slavery was ended and a century later critical civil rights were secured thanks to the collectively pricked conscience of millions of Americans who rose above the petty human tendency to discriminate against others based on the color of their skin to fulfill the Founding Fathers’ dream of a more perfect union.

Racism is base, unintelligent and wrong, and racial discrimination has absolutely no place in our schools, period.

Let’s teach the full, honest truth about slavery and racism in our country, with the moral, righteous truth about who each individual is before the God who created us equal and who gives us the rights that so many have fought for so long to see protected equally as well.

There is simply no other way to move forward, and anything else would be a tragic step backward.