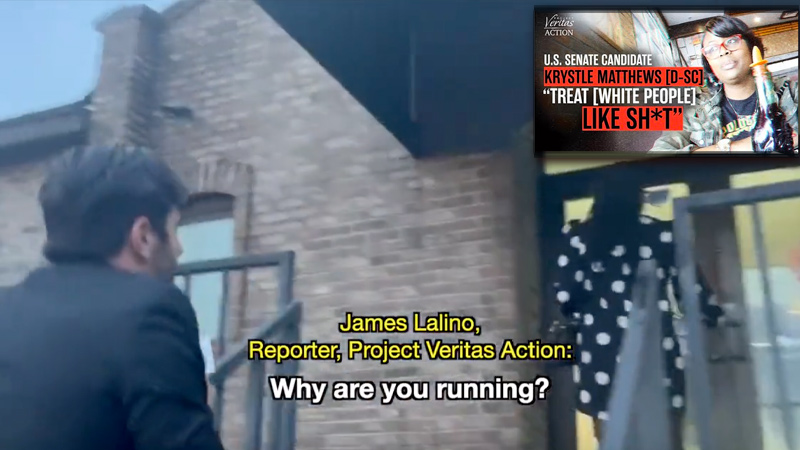 A Democrat US Senate candidate in South Carolina evaded a Project Veritas reporter who attempted to ask her about recent footage showing her viciously disparaging white people.

Matthews, who was exposed on video by Veritas earlier this week saying, “You gotta treat them [white people] like sh*t,” fled into a building when she saw Veritas reporter James Lalino approach.

“Krystal Matthews, you said that you wanted to put white people under your thumb,” Lalino told her.

“Why are you running?” he asked, trying to follow up on her comments as she ran up a stairwell.

Matthews later escaped into a car and drove away.

Video of Matthews making the racist remarks to an undercover reporter was released by Veritas earlier this week, rocking the US Senate campaign of the South Carolina state rep who recently won her Democrat primary election to face-off against incumbent Republican Sen. Tim Scott in November.

“Let me tell you one thing. You ought to know who you’re dealing with. You gotta treat them [white people] like sh*t,” Matthews told Veritas’ reporter.

“I mean, that’s the only way they’ll respect you. I keep them right here — like under my thumbs. That’s where I keep – like, you have to. Otherwise, they get out of control — like kids.”

In comments to local media, Matthews claimed Veritas edited her comments, and claimed her comments were directed toward “white Republican politicians and not white people in general.”

“I am not stepping down. The people put me here. People want a fighter,” Matthews said at a press conference Friday. “They are tired of these brazen politics where we keep electing these pretty cute elected officials who are nothing more than s— wrapped up in a pretty box.”