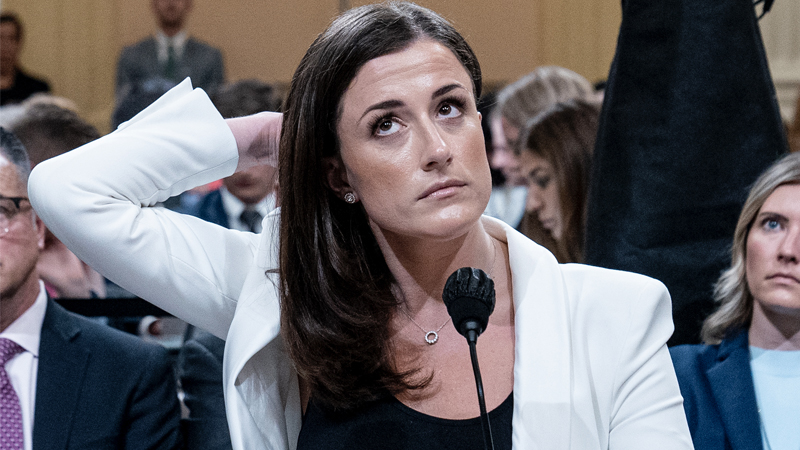 The “star witness” in the Democrat-led Jan. 6 Select Committee testified Tuesday that former President Trump angrily tried to take control of his presidential limo during the January 6 protests, leading to a cascade of mockery online and by Trump himself.

In hearsay testimony provided to the committee, Cassidy Hutchinson, a former aide to then-Chief of Staff Mark Meadows, claimed she was told by Deputy Chief of Staff for Operations Tony Ornato that Trump became angry when informed he would not be heading to the Capitol building following his speech at the Ellipse.

“I looked at Tony, and he said, ‘Did you f—ing hear what happened in the Beast?’” Hutchinson said. “He proceeded to tell me that when the president got in the Beast, he was under the impression from Mr. Meadows that the off the record movement to the Capitol was still possible or likely to happen and that Bobby had more information.”

Cassidy Hutchinson testifies that she was told that as then-President Donald Trump was being driven back to the White House after the Jan. 6 rally that he demanded to be taken to the Capitol and tried to grab the steering wheel from a Secret Service agent. https://t.co/JefVhEsY0b pic.twitter.com/uUyQcnSlLG

“The president had a very strong, very angry response to that. Tony described him as being irate. The president said something to the effect of, ‘I’m the f-ing president, take me up to the Capitol now,’”

“The president reached up toward the front of the vehicle to grab at the steering wheel,” she continued “Mr. Engel grabbed his arm and said, ‘Sir, you need to take your hand off the steering wheel. We’re going back to the West Wing. We’re not going to the Capitol.’ Mr. Trump then used his free hand to lunge toward [Secret Service agent] Bobby Engel.”

Trump rebuked Hutchinson’s testimony on Truth Social, saying “such a ridiculous thing” wouldn’t “have been possible.”

“Her Fake story that I tried to grab the steering wheel of the White House Limousine in order to steer it to the Capitol Building is ‘sick’ and fraudulent, very much like the Unselect Committee itself – Wouldn’t even have been possible to do such a ridiculous thing,” said Trump.

“Her story of me throwing food is also false…and why would SHE have to clean it up, I hardly knew who she was?”

First, Trump was not in his “Beast” presidential limo on January 6, but in a fortified SUV.

BREAKING: Jan 6 Committee Video Shows President Trump was in an SUV after the rally, not the Beast pic.twitter.com/tgrRJgKQhq

Even if he was in “The Beast,” he physically would have been unable to pull off such a stunt, as this diagram of the presidential limo reveals.

The Beast driver is separated from the passengers for security pic.twitter.com/bwlIs1UjRC

Hutchinson’s credibility further came into question given her attempt to work for Trump at Mar-a-Lago just a week after the events of January 6.

The corrupt J6 committee’s new SURPRISE WITNESS was so appalled by Trump and J6 that she…was planning to go work for Trump at his FL residence eight days *after* January 6 (article was published on January 14, 2021).

Trump said he turned her job-seeking effort down, calling her “bad news.”

If that wasn’t enough, the lead Secret Service agent and Trump’s presidential limo/SUV driver are reportedly ready to testify against Hutchinson’s claims that he reached for the steering wheel to turn back to the Capitol.

🚨 A source close to the Secret Service tells me both Bobby Engel, the lead agent, and the presidential limousine/SUV driver are prepared to testify under oath that neither man was assaulted and that Mr. Trump never lunged for the steering wheel.

The January 6 Committee’s witch hunt against Trump has been falling apart since it began, and recent polling found it to be nowhere on the American people’s radar.

Of all the issues CBS News asked about in new polling, “investigating January 6th” was the LEAST important issues to voters. pic.twitter.com/LqratypclL