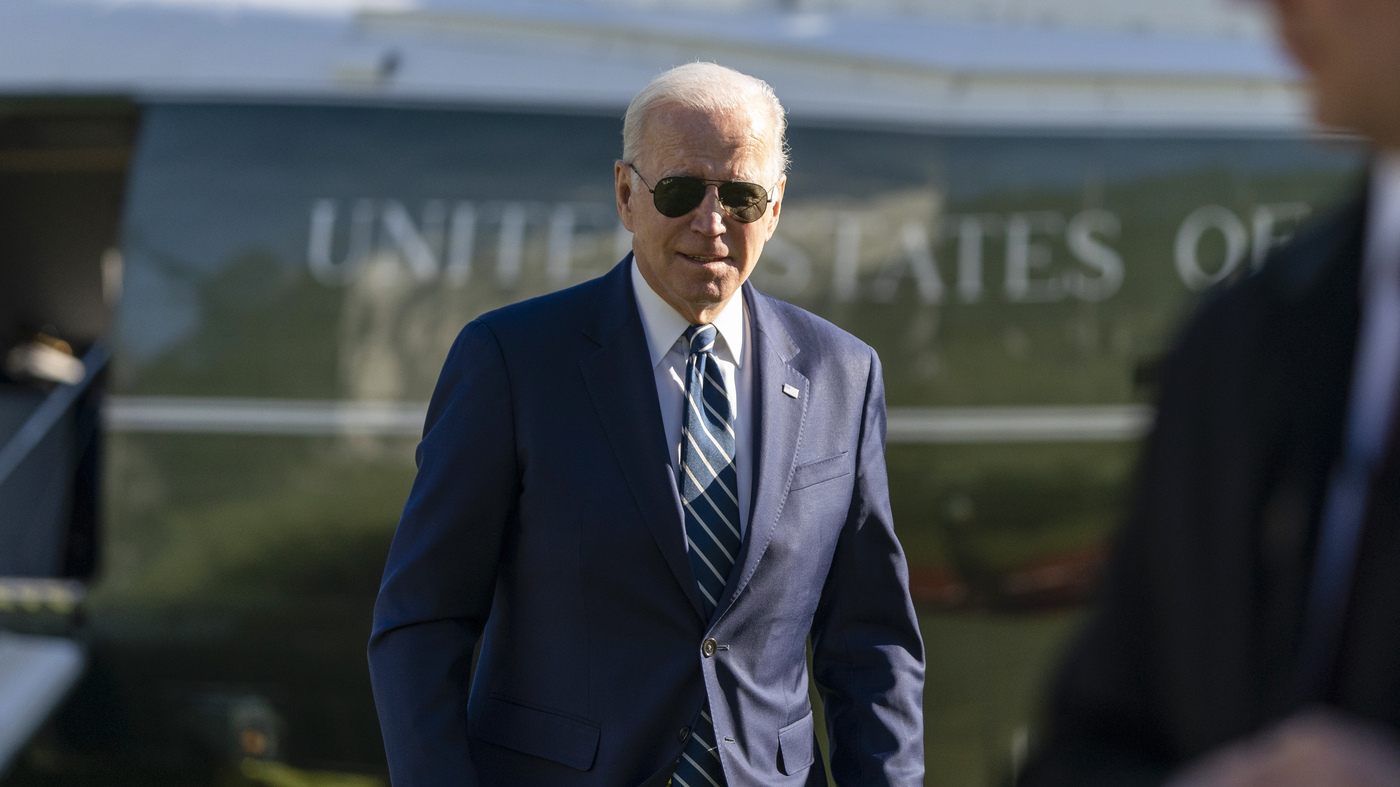 President Biden walks to speak with reporters as he returns to the White House Friday.

President Biden walks to speak with reporters as he returns to the White House Friday.

When a party is in trouble, it often says the problem is the message not the product.

In the case of the Biden agenda, that’s not completely spin. When the particulars of Biden’s plans are described to voters, majorities approve.

But polls also show voters don’t know much about what the Democrats are passing. This week, Biden tried to change that.

“The bill I’m about to sign into law is proof that despite the cynics, Democrats and Republicans can come together and deliver results,” Biden said at the bill’s signing Monday before going on the road to tout the plan.

First stop: New Hampshire, that first-in-the-nation primary state and a competitive state in presidential elections. There, Biden touted that the bill would mean cleaner water, more access to the internet and rebuilding roads and bridges.

“[E]verything in this bill matters to individual lives of real people,” the president said. “This is not something abstract.”

The president’s efforts to sell Democrats’ agenda, couldn’t come a moment too soon for Democrats, who are trying to avoid losing their majorities in Congress next year.

Less than a year from Election Day, the headwinds Democrats face are fierce. Biden’s approval ratings are slumping; the Democrats took a worse-than-expected drubbing in the off-year elections; and there are structural obstacles, like the historical pattern of midterm voters rejecting the party in power and the Republican advantages in drawing new congressional district lines.

Add to that — inflation, a pandemic that won’t quit and voter apathy among their base, and Democrats find themselves in a very deep hole.

On top of that, what got much of the attention in the last several months was Democratic infighting, as these massive pieces of legislation have been negotiated — sometimes all too publicly.

That’s something Democratic strategists say the party needs to fix. It needs to unify, they say, if it wants to have any hope of salvaging its majorities.

“We need the Democrats in Congress to stop fighting each other to pass this next piece of legislation, so that the contest can be between Democrats and Republicans and not Democrats and Democrats,” said Guy Cecil, who runs Priorities USA, one of the biggest Democratic super PACs.

The importance of making the sale

Biden’s theory of the case is that if Democrats could just deliver policies that help middle-class Americans afford child care and prescription drugs, help them get a job or charge their electric car, they’ll vote for Democrats next year.

“Delivering on those promises and talking about the delivery, demonstrating the delivery, campaigning on the delivery are very, very important,” Democratic pollster Celinda Lake said.

The months of the Democratic circular firing squad being in the spotlight — the fighting among themselves over how to spend many trillions of dollars — threatens to undercut the significant things these bills do and would do, if the social safety net bill passes the Senate.

That process fight, Lake says, was a particular problem for white women without college degrees, a group of voters Democrats lost this year in Virginia, a state Biden won easily in 2020.

Another group that is growing farther and farther out of reach for Democrats is rural voters. Democrats are facing something close to collapse with them.

But Montana Sen. Jon Tester maintains that the infrastructure bill and the Build Back Better plan can help turn that around — if they’re sold correctly and Democrats are present in those places.

“I am in the process right now to talk to folks in Montana about explaining to them what’s in this bill and how it can change our way of doing business in Montana for the better and actually lower costs for families and help small businesses expand,” Tester told Punchbowl News this week. “We can sell that to rural America, too. But you have to show up, and you have to talk about it.”

For Cecil, the target voter is someone who couldn’t stand Trump, voted for Biden, but then drifted away or didn’t show up to vote, like in the Virginia governor’s race.

Without these voters, Cecil said, Democrats can’t win next year.

And they’re hard to reach because they’re simply exhausted by COVID and by Washington.

That’s easier said than done when turnout drops off dramatically between presidential and midterm elections, and first-term midterms are not kind to sitting presidents. That’s because rank-and-file supporters of the opposition party are more fired up.

Democrats want to define the midterms as “Democrats deliver, Republicans stand in the way.”

But it will be an uphill battle, because this year Republicans started winning back swing suburban voters by framing the election around culture, not policy.

They’re focusing on issues, like how race is taught in schools. Next year, Republicans say they will run as the parents’ party.

“The issue for parents is, are they going to have a say in our education? Are kids going to grow up being proud of being American?” Khanna asked rhetorically. “And are we going to have an honest accounting of history? And I think all [of these] things are possible, because that’s what great countries do. I just think we have to speak to that as opposed to not recognizing the fears or anxieties of parents.”

Democrats, though, have seen a steady decline in those saying they’re proud to be American, Gallup has found. Twenty years ago, a majority of Democrats said they were “extremely proud” to be American. As of July, that was down to just 31%.

Two-thirds of Republicans, on the other hand, say so.

Democrats believe that their agenda, once it’s passed in its entirety, could help them climb out of the hole they’re in.

But only if they win the argument, and that starts with the president.