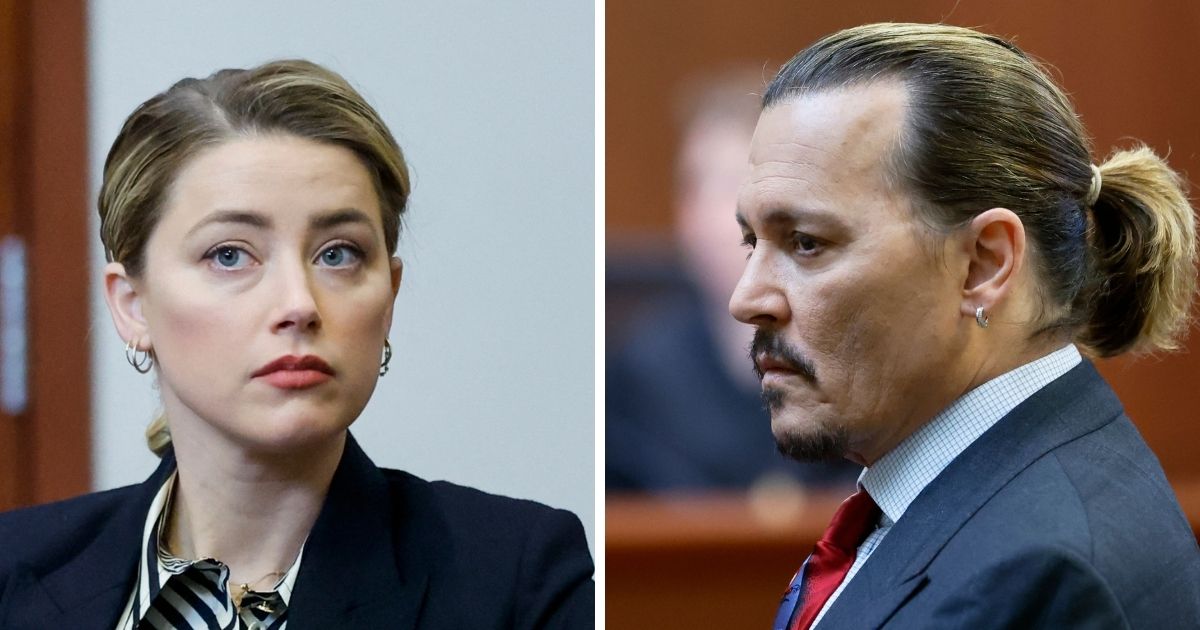 Every so often, grown adults, are forced to take a look at the lives of celebrities as part of a serious cultural discussion and not just the sordid detritus that fills up TMZ and the glossy magazines that litter dentists’ offices.

In this case, the lives in question are those of actor Johnny Depp and ex-wife Amber Heard. As you may know, the 58-year-old Depp and 36-year-old Heard are currently embattled in a defamation suit over a piece Heard wrote for The Washington Post in 2019 in which she described herself as a victim of domestic violence.

Depp lost a similar libel case in Britain in 2020 over accusations of being a “wife-beater”, but the circumstances this time are considerably different.

(Here at The Western Journal, we’ve noted how Hollywood loves to lecture us on morality but never seems to follow it on its own. We don’t think that movie stars or singers need to lecture us about anything, particularly when the logs in their eyes oft compare very unfavorably to the specks in ours. If you agree with us and think heartland values trump Hollywood’s, please consider subscribing.)

The reason Heard/Depp 2 has entered our cultural consciousness, at least for most, is that it could represent the first time a celebrated #MeToo case ends up turning on the accuser.

While Heard represented herself as a victim of physical and sexual abuse from Depp, audio began surfacing in 2020 in which Heard admitted abusing Depp. More of that audio has been played in court this time around, according to People magazine.

The case is being heard in the Fairfax County, Virginia, Courthouse because the Post’s online editions are published on servers based in Fairfax, according to NBC News. Depp is seeking $50 million in defamation damages, Heard has countersued for $100 million, according to Insider.

Another detail that has emerged in both trials, but which has received more attention this time around, is both shocking and stomach-churning: Heard allegedly defecated in Depp’s bed after he left her but while the couple were still married.

According to Business Insider, Depp testified April 20 that the incident happened after Heard’s 30th birthday party in April of 2016 at their Los Angeles penthouse.

Are you a believer in Jesus Christ?

“After the dinner, he said, Heard flew into a ‘verbal barrage’ because Depp was late and because of other perceived slights. Depp said he didn’t engage with her. He testified that when she hit him he grabbed her shoulders, sat her down on the bed, and told her he was leaving,” Business Insider reported.

“I said I was leaving, please don’t follow me,” Depp said, according to the report. He told the court that despite Heard punching him in the face numerous times, he was able to make it out.

He wanted to return the next day to get his belongings because he knew Heard was leaving the house with her friends. However, his bodyguard said it was a bad idea, since he had been sent a photograph by Depp’s housekeeper.

“It was a photograph of the bed, our bed,” Depp said. “And on my side of the bed was human fecal matter.”

Depp said Heard blamed the defecation on the couple’s dogs — which he said was impossible.

“She brought up the fecal matter on the bed. She tried to blame it on the dogs,” Depp said, according to Business Insider. “They’re teacup Yorkies. They weigh about 4 pounds each.”

“I lived with those dogs. I picked up their funk. It was not the dogs.”

Then there’s the matter of the audio. In one recording, according to People, Depp said he wanted to “escape” a fight to de-escalate the situation. Heard, meanwhile, tells him to quit running away.

In another recording, Heard admitted to physically abusing Depp during their relationship.

“You didn’t get punched; you got hit. I’m sorry I hit you like this, but I did not punch you,” she told Depp.

Now, there are some people who care about this because they like watching a human version of “Air Crash Investigation.” They’d care about this even if there was nothing of cultural import to discuss.

However, the trial looms larger for some — particularly critics of the #MeToo movement — because it illustrates the potential dangers of turning the phrase “believe all women” into a bedrock cultural value. Heard was, for many years, seen as a symbol of a woman in Hollywood who had fallen prey to a toxic, untouchable male star. It turns out that, at the very least, she was a domestic abuser herself.

There’s a third reason to pay attention to this trial, however, beyond picking sides or watching a human train-wreck: This is what Hollywood dreams look like when they’re bereft of Christian values.

In considering Depp’s case, it’s worth noting that even if he isn’t a domestic abuser, there are few other fields but entertainment in which his life choices would be tolerated.

On the screen, Depp has played characters based, in part or in whole, on notorious inebriates Hunter S. Thompson and Keith Richards. Off-screen, Depp has lived a similar life of excess and has been open about his prodigious use of drugs and alcohol. In a 2018 Rolling Stone interview where he discussed his various legal and monetary problems, he chafed at an accusation from his management group that he spent $30,000 a month on wine.

Another excerpt from the Rolling Stone piece: “Later that night, Depp laments the passing of quaaludes from the drug scene. He reminisces about the bootleg ’ludes he used to take.”

“’They’re made with just a little bit of arsenic, or strychnine,’ says Depp. He stands up and a grin spreads across his face. ‘So the high was far more immediate.’ Once, Depp asked a Florida bouncer to punch him while on ‘ludes just for kicks. ‘You either wanted to smile and just be happy with your pals, or f***, or fight,’ he says.”

Heard, meanwhile, is one of Depp’s two broken marriages and three broken engagements. (Fandomwire has a full list of his dating habits, if you’re interested.) And even if he didn’t abuse Heard, these are some of the text messages he sent her during their relationship:

WARNING: The following video contains graphic language that some viewers will find offensive.

@youngdumbhoneybun98 More highlights: text messages between JD and AH have been brought up as evidence, showing the “insults” JD has used against Amber, in which he called her (among others) “officer square head” and “lesbian camp counsellor” #johnnydepp #amberherd #freejohnny #courtcase #fyp #fypシ ♬ original sound – Young Dumb Honey Bun

And yes, here’s where we usually throw up our hands and say money doesn’t buy happiness. But it goes further than that. Money can buy a specific type of hellish unhappiness if it’s paired with a lack of biblical virtue.

Whatever liberals think of the Bible,  the Good Book’s teachings are fairly clear on sex, sobriety, marriage, how one’s spouse is supposed to be treated, violence, how money is supposed to be used and how one is supposed to comport themselves in public. It’s all in there — and not difficult to find.

So, instead of deciding whether the woman who allegedly defecated on her husband’s bed is in the wrong for harming the career of a quaalude-loving dipsomaniac with false allegations of abuse, perhaps — and this is just a suggestion — we ought to meditate on how our modern freedom from fusty old Judeo-Christian restraints on morality has been anything but freeing.

There’s only one thing that could have saved Depp and Heard’s relationship: Christ. From the looks of it, however, they’re both very far from seeking out His saving grace.