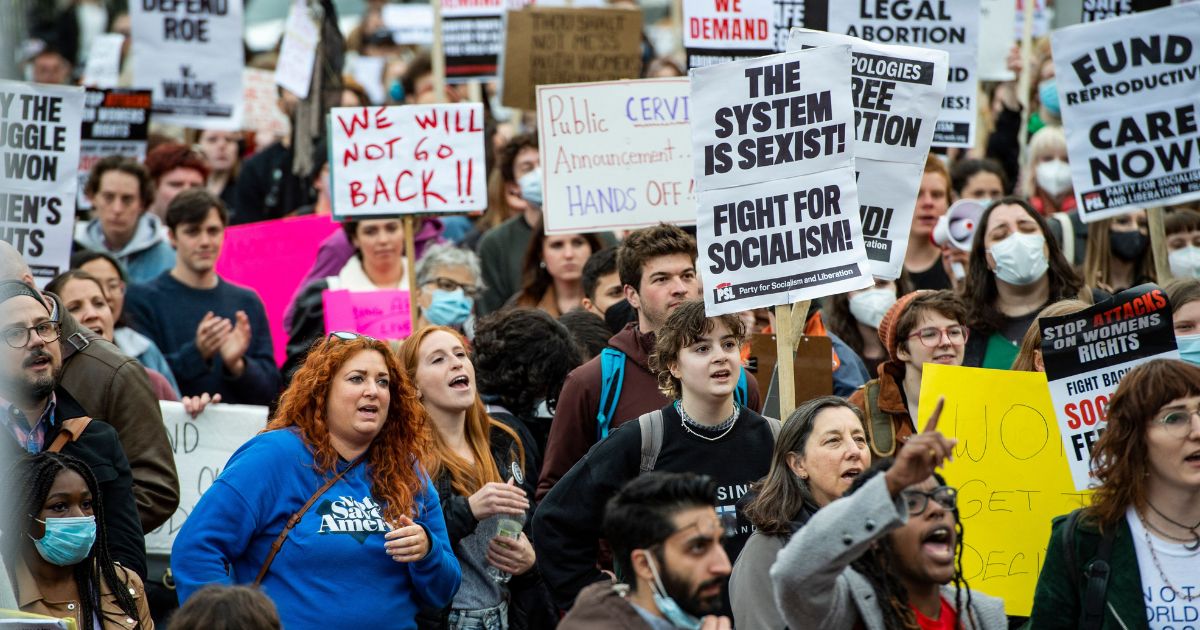 A pro-abortion activist group that calls itself “Ruth Sent Us,” after the late Justice Ruth Bader Ginsburg, has scheduled visits to the homes of each of the conservative Supreme Court Justices. The event, called “Walk-by Wednesday,” will be held on May 11.

The group is angry after a leak of the justice’s 5-4 draft opinion showed the Court, at least preliminarily, had voted to overturn Roe v. Wade.

By doxing the justices, whom they refer to as “extremist,” and protesting in front of their homes, they hope to intimidate one of them into changing their vote on the case of Dobbs v. Jackson Women’s Health.

The website stated, “Ruth Bader Ginsburg spent her entire life moving the needle towards justice for all. She believed, and we believe that: Women Deserve Trust, Black Lives Matter, Love Is Love, No Human Is Illegal.”

“Our 6-3 extremist Supreme Court routinely issues rulings that hurt women, racial minorities, LGBTQ+ and immigrant rights. We must rise up to force accountability using a diversity of tactics,” the site said.

The group is also planning to protest in churches this Sunday, which is, ironically, Mother’s Day.

Whether you’re a “Catholic for Choice”, ex-Catholic, of other or no faith, recognize that six extremist Catholics set out to overturn Roe. Stand at or in a local Catholic Church Sun May 8. #WarOnWomen #MothersDayStrike pic.twitter.com/v2vtpd12Gp

Carrie Severino, president of the Judicial Crisis Network and a conservative political writer, questioned who might be funding this group in a Twitter thread.

She wrote, “The website notes that ‘stipends [are] available’ for protestors. Who exactly is paying for these stipends? More pointedly, who is funding the threat against Supreme Court justices?”

The website links to a different organization, “Strike for Choice,” which shows connections to groups including Black Lives Matter, Code Pink, Women’s March SF, Kavanaugh Off Our Court, and Rise Up 4 Abortion Rights. How exactly are these groups connected? /3 pic.twitter.com/KckGEdsxfJ

Regarding the “peaceful protests” that are mentioned on their website, Severino questioned if they really mean “burning down cities across the country during BLM, which appears to be connected with this group?”

During the Kavanaugh confirmation hearings, a rep for the Women’s March “confirmed that her group had coordinated a plan to disrupt the hearings. That included offering lodging to traveling protesters and ‘jail and bail support’ if necessary.” /5https://t.co/9l87mHnX1i

Severino, who collaborated on a book with The Federalist’s Mollie Hemingway about the Senate confirmation hearing for Justice Brett Kavanaugh, wrote that “the parallels between this planned protest and the disgusting antics we saw from left-wing dark money groups during the Kavanaugh confirmation are striking.”

And she wondered, “Will groups like @WeDemandJustice condemn these protests? So far they have been silent. What about Demand Justice board member @ElieNYC? Or is ‘Ruth Sent Us’ also connected with the Arabella Advisors dark money network?”

Do you think any of the justices will change their minds?

Somehow, I don’t think any of the justices will be swayed by the efforts of “Ruth Sent Us.” This type of action will likely strengthen their resolve. If any of them had actually considered changing their vote ahead of time, a group of pro-abortion activists gathered outside their home would make them less likely than ever to flip. They wouldn’t want to be seen as being influenced by political forces.

In one of his monologues this week, Fox News host Tucker Carlson coined the term “government by tantrum.” I believe he was referring to the performances of two Democrats — Sen. Elizabeth Warren of Massachusetts and Vice President Kamala Harris — whose anger had been recorded, but the tactics of “Ruth Sent Us” could easily fall into that category.

It’s worth noting, according to The Daily Caller, Ginsburg predicted in a 1992 lecture that Roe v. Wade could lead to instability.

“Measured motions seem to me right, in the main, for constitutional as well as common law adjudication,” Ginsburg said. “Doctrinal limbs too swiftly shaped, experience teaches, may prove unstable. The most prominent example in recent decades is Roe v. Wade.”