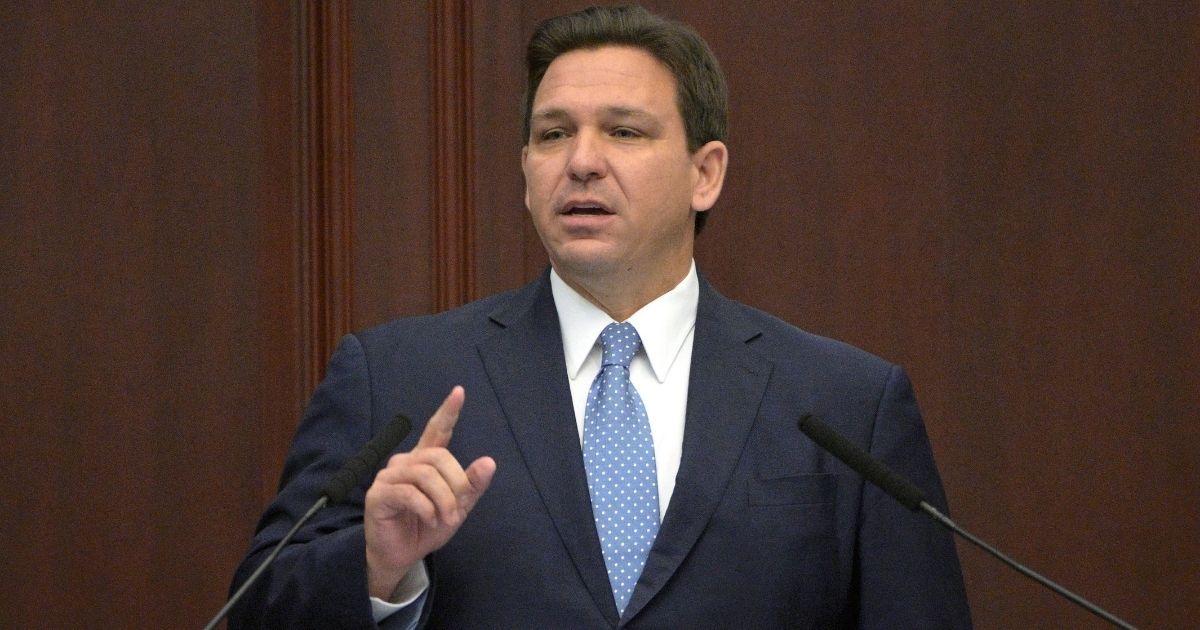 Nikki Fried has been watching the History Channel a lot of late, I see.

After all, that corner of the cable lineup is notoriously fascinated with Nazi leader Adolf Hitler. So is Fried, Florida’s agricultural commissioner and a 2022 Democratic challenger to GOP Gov. Ron DeSantis. During an appearance on NPR’s “Florida Roundup,” she compared DeSantis to Hitler multiple times, doubling down on remarks that the governor was “authoritarian.”

Of course, you can expect to see these attacks against DeSantis from the left now that his stand for freedom in the face of pandemic restrictions have made him a potential 2024 presidential choice. The media isn’t going to linger over these low blows — in fact, they’ll be delivering plenty of them — but here at The Western Journal, we’re going to keep holding politicians and pundits accountable for their rhetoric. You can help us in our fight by subscribing.

According to the New York Post, Fried’s Hitler comparisons came after WJCT-FM reporter Melissa Ross asked Fried about referring to DeSantis as an “authoritarian dictator.”

Fried didn’t back away from the comparison. “He is doing everything possible to take power away from local governments, taking away people’s abilities to protest, making it harder to vote, talking about, you know, banning books,” she said.

Ross interjected and asked if she was really comparing DeSantis to Hitler.

Without hesitation: “In a lot of ways, yes,” Fried replied. “I have studied Hitler and how he got to power, you know, wanting his own militia.”

Ah, yes, the “wanting his own militia” tactic. Just for clarification, this was a reference to DeSantis’ proposal to restart the Florida State Guard, an auxiliary volunteer civilian unit which would aid the Florida National Guard during emergencies in the state. Twenty-two other states currently have these forces.

Should Nikki Fried withdraw and resign over these remarks?

“This governor is doing it for the sole purposes of power and doing so to make fear and to instill that, to blame people for what is happening in their lives, blaming certain parts of our society and our culture, and that’s exactly what Hitler did to the Jews back during World War II.”

Hoo Boy… It’s one thing to *read* that Nikki Fried compared Ron DeSantis to Hitler; completely another to blow by several offramps en route to that comparison. Will media cover? pic.twitter.com/bMYDowcZGD

Ross asked what Fried would say “to those who find this comparison offensive — the whole idea of Godwin’s Law, that once you compare someone or something to Hitler or the Nazis, you’ve lost a lot.”

“Not at all,” she replied. “I mean, look, do I think we’re going to get to the extent of Hitler’s power? Of course not.”

“But the rise of his power and what he did to scapegoat certain parts and especially the Jewish community in Germany and how he utilized going after the media, going after and scapegoating people and blaming people and putting fear and then taking over the military, that’s what this governor is doing.”

It’s a particularly despicable and evil tactic to invoke mental images of Leni Riefenstahl Nazi propaganda films to defame one’s opponent and then admit they’re not “going to get to the extent of Hitler’s power,” particularly when that same person is accusing the person they’re comparing with Hitler of “mak[ing] fear.”

But then, this isn’t the first time Fried has compared DeSantis to bloodthirsty strongmen. Strangely, however, she’s been more about flippant comparisons to communist dictators than fascist ones.

In a May 2021 Miami Herald Op-Ed, Fried said this about DeSantis’ support for election integrity legislation: “From Nicolás Maduro’s actions to undermine Venezuela’s electoral process and suppress votes, to Daniel Ortega’s moves to intimidate and confuse voters in Nicaragua, tactics to limit voting has been widespread in South American regimes. Voter suppression is a slippery slope that ends only with injustice.”

She also criticized DeSantis’ support for a bill which would crack down on law enforcement agencies that stood down during riots, much like we saw in the summer of 2020 in the wake of the death of George Floyd — comparing the governor to Cuba’s strongman: “This move to silence, intimidate and imprison opposing voices bears a chilling resemblance to Fidel Castro’s actions to jail critics of his regime.”

Then, during a December appearance on Joy Reid’s MSNBC show, she nodded along as Reid compared DeSantis to Fidel Castro:

A slap in the face to the victims of the Castro regime who call Florida home as well as those of us whose families were forced to flee his murderous tyranny. pic.twitter.com/jxyXfn8o7z

However, this is the first time Fried has gone for the H-word, which drew strong pushback from the governor’s office.

“If we had an honest media instead of DNC stenographers, reporters would be criticizing Nikki Fried’s dishonest and offensive claim that Gov. DeSantis is a modern-day Hitler. With this hysterical comparison, Fried not only smears millions of Floridians as Nazis, but also trivializes Hitler’s crimes against humanity. This is not funny, it’s sick,” tweeted Gov. DeSantis’ press secretary, Christina Pushaw.

If we had an honest media instead of DNC stenographers, reporters would be criticizing @NikkiFried ‘s dishonest and offensive claim that @GovRonDeSantis is the modern Hitler. Such a comparison trivializes Hitler’s crimes against humanity. This is not funny, it’s sick.

Pushaw also noted how farcical the notion of a DeSantis “dictatorship” is, given his political stances:

NPR interviewer: “What makes you say that?”

Nikki Fried: “He doesn’t make us show our papers to go to restaurants, and he doesn’t allow local governments or corporations to do it either! He’s also against critical race theory!”

At the very least, Fried’s comments made an NPR reporter sit up and push back against her rhetoric. That’s not enough, however.

The sheer volume of Hitler comparisons during the administration of President Donald Trump has inured too many of us to the realities of the Nazi regime and the Holocaust — especially those in the media. In the past, Fried’s flippant comparisons of DeSantis to dictators were an insult to the numerous Floridians who directly suffered under those leaders or knew those who did. This is different: a slap in the face of every Jewish voter in Florida, using one of history’s ugliest monsters to get votes.

Not only should Fried withdraw from the gubernatorial race, she should resign from her position as agricultural commissioner. This is simply a bridge too far.