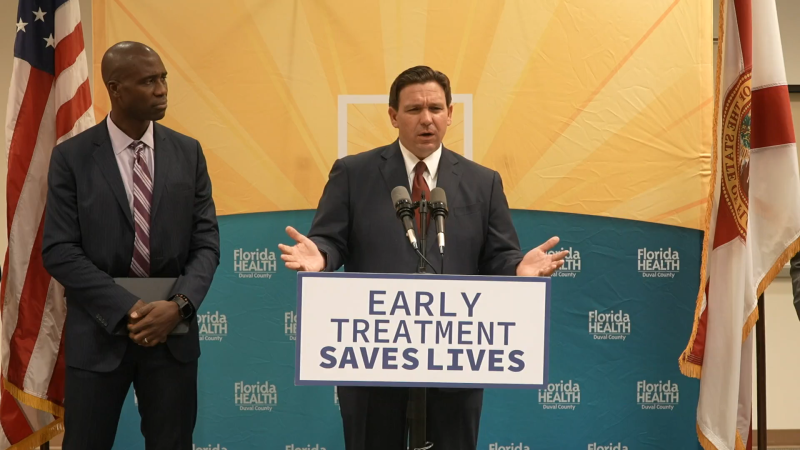 Speaking to Floridians about how important early treatment is when it comes to battling Covid, DeSantis explained that the state’s supply of monoclonal antibodies is currently “totally inadequate.”

The governor said the Biden administration gave Florida 2,000 doses less than they were provided last week, and “about half as much as was sent to the state of New York, and New York has millions fewer people than the state of Florida.”

“Bogarting these treatments like that and not putting them out is wrong,” DeSantis declared. “I know they don’t really believe in it, that has not been in their philosophy, but their approach has not worked and we just have to be honest with that.”

Governor DeSantis pointed out that as presidential candidate, Biden promised to “shut down the virus” if elected, which turned out to be a total lie as Covid cases are exploding over a year later.

If the federal government does send more monoclonal antibody treatments to Florida, DeSantis says he’ll open a new site in Jacksonville as soon as it comes in.

As Infowars reported in September, the Biden administration began rationing doses of the treatment after seven southern states started seeing a reduction in Covid cases.

Now, state leaders in Texas and Florida are calling out the seemingly political withholding of the Covid treatments.

The Democrat-run federal government is willing to let tens of thousands of Americans die in order to play their political games with Republican-run states.

During his appearance on the Joe Rogan Experience, Dr. Robert Malone called out pharmaceutical companies and the US federal government for their concerted effort in blocking early COVID treatments from the general public.