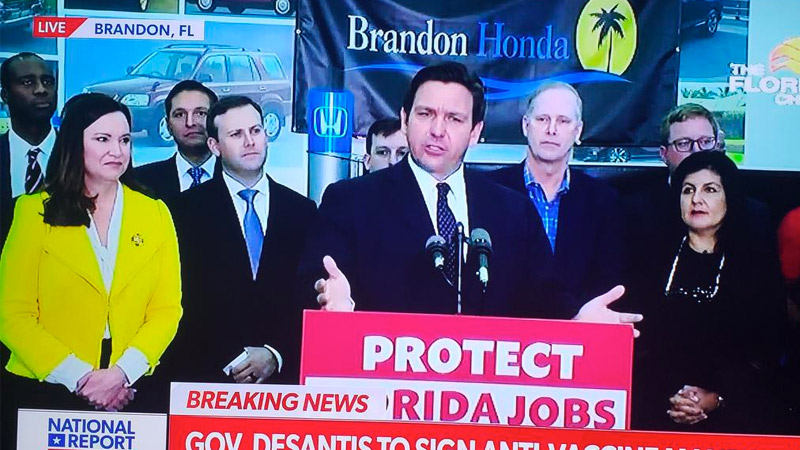 Announcing the anti-mandate bills from Brandon, Florida, DeSantis pledged support for workers, many of whom were in danger of losing their jobs due to vaccine work requirements.

“I told Floridians that we would protect their jobs and today we made that the law,” the governor and potential presidential candidate told an enthusiastic crowd.

“Nobody should lose their job due to heavy-handed COVID mandates and we had a responsibility to protect the livelihoods of the people of Florida. I’m thankful to the Florida Legislature for joining me in standing up for freedom.”

More on the anti-vaccine mandate bills signed Thursday from the Miami Herald:

The bills do the following:

▪ Restrict businesses’ ability to mandate vaccines for their employees. Companies have to offer workers a number of exemptions or risk fines of at least $10,000 per violation from the state. This measure would expire June 1, 2023.

▪ Create a public records exemption to conceal from public view investigations by the attorney general’s office into violations of the law restricting vaccine mandates. The investigations would become public once they are closed — except for an individual’s religious or medical information.

▪ Direct DeSantis to form a plan for the state to eventually create a new agency to replace the federal Occupational Safety and Health Administration in monitoring workplace safety.

▪ Strike from state law the surgeon general’s ability to mandate vaccination for an individual during a public health crisis.

The bills come as Biden’s federal employer vaccine mandate was poised to take effect before the 5th U.S Circuit Court of Appeals slammed the brakes Wednesday, ordering OSHA to back off and saying the mandate was “fatally flawed” and “staggeringly overbroad.”

After the announcement, one reporter asked how DeSantis’ rebuke of Biden’s mandates squared with his state’s imposition of rules blocking cities from implementing mask orders. Here was his response:

DeSantis gets it. This man is presidential. pic.twitter.com/JQkQUffTW2

Another reporter also questioned if the selection of Brandon, Fla., for the announcement was meant as a troll to Biden.

“It’s obvious to a lot of people in the crowd that you chose Brandon because of the thing that goes around on certain websites,” the reporter asked. “Is this why you came to Brandon? Because you’re trolling the Biden administration?”

“I think that Brandon, Florida, is a great American city,” DeSantis replied to laughter. “I think the people here are fantastic.”

At that point, chants of “Let’s go Brandon” broke out from the crowd.

“The significance of signing this legislation in Brandon, Florida, is not lost on the governor,” his press secretary added.

During the event, DeSantis also welcomed to the stage Florida second-grade student Fiona Lashells, who’d been suspended 38 times from school for refusing to wear a face mask.

This girl did more to fight tyranny than the GOP https://t.co/Lcbg5bBpfN