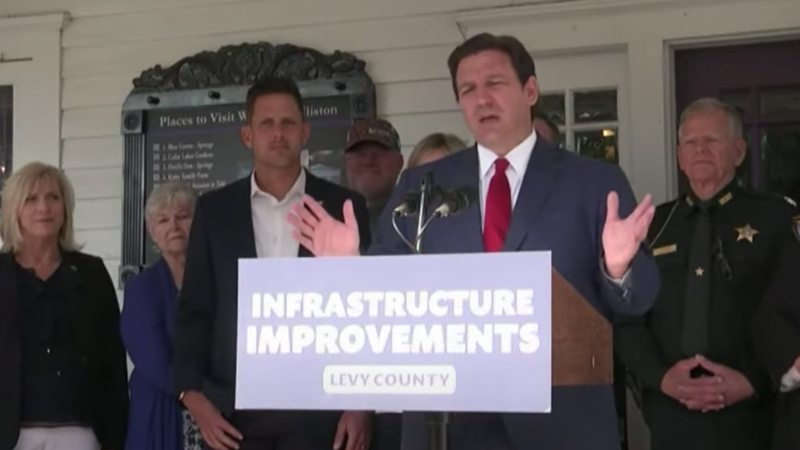 The governor dissed the program Friday during an event unveiling new infrastructure funding, joking he thought it was a late April fool’s joke.

“So, as if they don’t have enough issues to deal with, they now have an idea – and I honestly thought this was just a belated April Fool’s Joke – but they are actually going to create, in the Department of Homeland Security, a Bureau of Disinformation,” DeSantis said.

“Then when you speak out they want to stifle dissent – and so we reject this bureau in the state of Florida,” he told a crowd, which applauded.

The governor went on to say the board would prevent the people of Florida from having dissenting voices against vaccine and mask mandates, and overreaching Covid restrictions.

“We believe it’s essential that individual Floridians and Americans are able to speak out against false narratives trying to be jammed down our throats by this regime,” he said.

He went on to comment he’s hopeful Elon Musk will enact change for the better at Twitter.

“They wanted to use Twitter as a way to enforce the narrative,” he said.

“They’ll deplatform you. They will censor you; and so that is something for a free society to not be able to speak out on these major platforms where so much speech goes on. You know that’s a huge, huge problem and Musk saw that and Musk saw people being censored. He saw websites like the Babylon Bee, a satire site, being locked out because they had the temerity to do satire about some of the transgender ideology.”

He added the state of Florida will fight back against Biden’s disinfo board.

“I think that shows you there’s a lot of momentum now behind having free speech… so that people can speak the truth, particularly speaking the truth to a very decaying and discredited ruling elite in this country.

“And so this is going to be potentially an engine where the American people can speak the truth and fight back, but clearly our entire principles of the country was founded on, you cannot have a Ministry of Truth in this country,” he said.

The governor also mocked recent Biden gaffes, remarking “it’s sad” Biden is “floundering on the world stage” and “shaking hands with the air.”

“Look, they’re not exactly on a winning streak right, I mean they’ve got a lot of problems,” he said, referring to the Biden admin’s out-of-control inflation and skyrocketing gas prices.