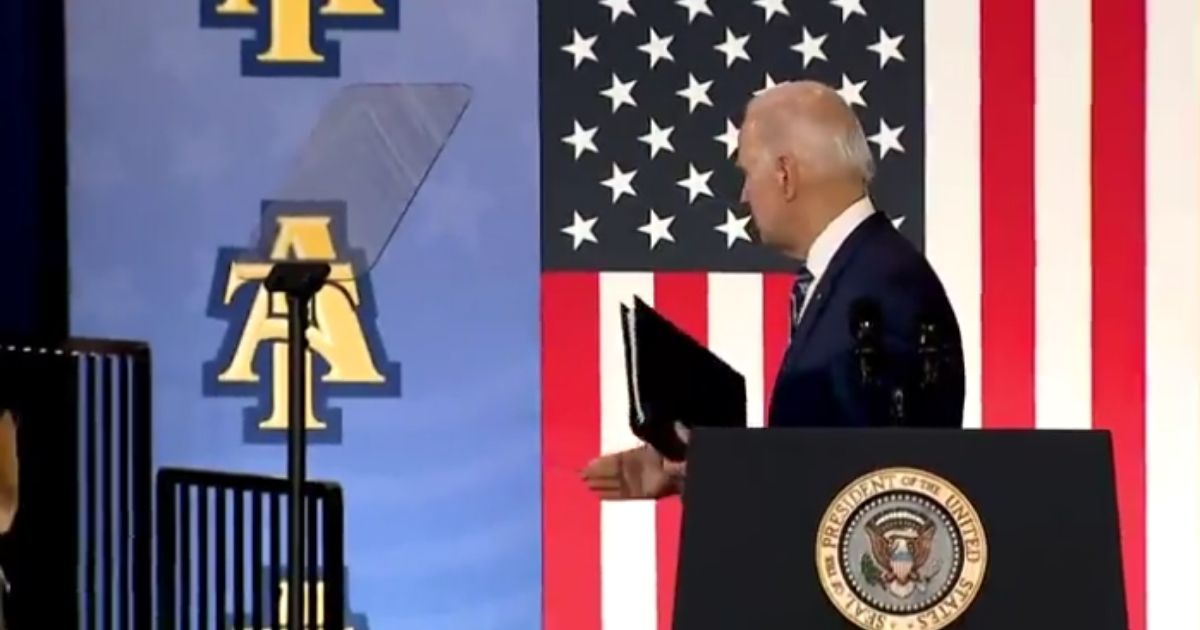 Continuing a concerning trend, President Joe Biden appeared confused after he finished a speech on Thursday.

Biden was speaking at North Carolina A&T State University, according to WGHP-TV.

The president offered a handshake to thin air as he concluded his remarks, almost looking like he was trying to shake hands with a ghost.

After Biden finished his speech, he turned around and tried to shake hands with thin air and then wandered around looking confused pic.twitter.com/ZN00TLdUUo

Whoopi Goldberg Missing from ‘The View’ After Outbursts: ‘She’s Gone for a While’

Biden seems to have been under the impression that somebody was right next to him, but from the looks of it, he was the only person on stage.

After the errant attempt at a handshake, Biden wandered around the stage for a few seconds.

The president ultimately turned around and found steps leading away from the dais.

In his speech, Biden repeated the claim that Russian President Vladimir Putin is primarily responsible for the inflation devastating American families and wreaking havoc on the economy.

“What people don’t know is that 70% of the increase in inflation was the consequence of Putin’s price hike because of the impact on oil prices,” President Biden says in discussing inflation and supply chain issues at an event in North Carolina. pic.twitter.com/s9HqG634JP

In reality, inflation has consistently escalated since Biden was sworn in as president in January 2021, over a year before Putin launched his invasion of Ukraine.

The handshake gaffe comes days after it appeared a bird defecated on Biden during a speech at an Iowa ethanol plant.

Last week, Biden was totally ignored by a crowd of Washington Democrats during an event at his own White House.

Schumer Says He’s Been Talking with Biden About Student Loans, And America Should Be Alarmed

The crowd, which included House Speaker Nancy Pelosi, acted as if Biden wasn’t there as they gathered around former President Barack Obama.

Biden’s approval ratings have plummeted to dismal new lows amid a spree of policy failures and concerning gaffes.

The president has made more public appearances as of late, with his White House handlers perhaps fearing that avoiding interviews and public scrutiny can no longer serve as a viable political strategy.