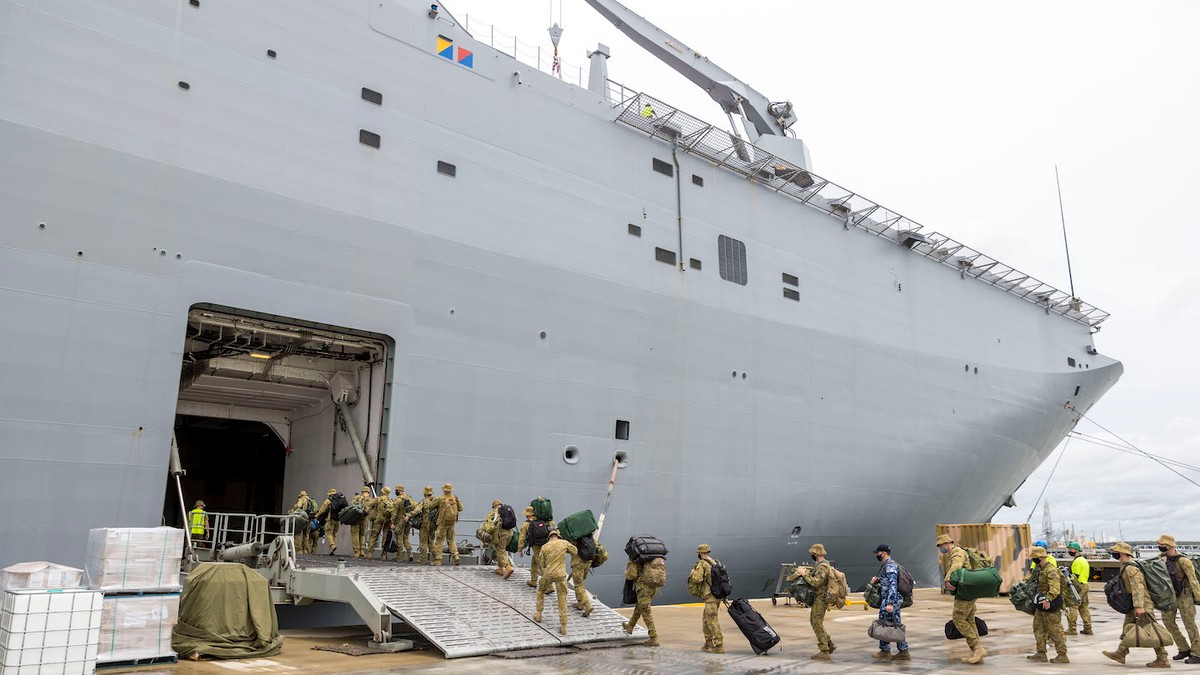 Humanitarian aid has been pouring into Tonga in the wake of January’s volcanic eruption and subsequent tsunami. Photo by CPL Robert Whitmore/Australian Defence Force via Getty Images

The reported cases, which were detected after a COVID-ridden Australian ship delivered supplies to the capital of Nuku’alofa, have reaffirmed fears that humanitarian support in the wake of the January 15 volcanic eruption and tsunami could bring the virus to the Pacific Island Nation.

Before this week Tonga had reported just one case of COVID-19 since the pandemic began, triggering a seven-day snap lockdown in October when a missionary tested positive after returning from Africa via New Zealand.

Prior to that, the country was among the last places on the planet to have avoided any virus outbreaks.

Prime Minister Siaosi Sovaleni urgently announced the lockdown for the whole of Tonga on Wednesday, declaring that schools will be closed and civil servants will not be required to work while urging people to wear masks in public. It’s believed close contacts of those infected may have travelled to the country’s outer islands, according to the ABC.

Authorities have not confirmed if the positive cases, detected during routine testing at the Nuku’alofa wharf, are linked to the Australian warship, HMAS Adelaide, which arrived in Tonga last week with 23 confirmed cases on board.

On the day that outbreak was detected, Australian Defence Minister Peter Dutton claimed the plan was to keep the boat at sea in order to minimise any risk of exposure to the Tongan population. The next day, however, after liaising with Tongan authorities, the boat docked in Nuku’alofa and offloaded humanitarian and medical supplies, along with engineering equipment and helicopters.

“The ship will berth and no contacts will be made,” Tonga’s health minister, Saia Piukala, told Broadcom Broadcasting radio at the time. “Australians from the ship will unload their cargoes and sail from port.”

Tongans are in urgent need of humanitarian support following the undersea volcanic eruption at Hunga Tonga-Hunga Ha’apai last month. The eruption triggered massive tsunamis that claimed at least three lives and spewed a 20-kilometre mushroom plume of volcanic ash into the sky, much of which has now settled over the Pacific Island nation and contaminated water supplies.

Drinking water, food and medicine is in desperately high demand. But there are fears that a COVID outbreak, potentially ushered in on the back of international aid, could be even more devastating to the country than the disaster itself.

“Tonga does not need a COVID disaster on top of the impacts of the eruption and tsunami,” Sophie Ford, response manager for international programs at the Australian Red Cross, told development publication Devex. “It would potentially devastate the community of 107,000 people and overwhelm the health system. All organisations providing external response support must work to maintain the safety of the community.”

Fiji-based United Nations coordinator Jonathan Veitch flagged similar concerns, noting that any aid which required personnel to enter the country – potentially bringing COVID with them – posed grave risks to a nation like Tonga.

“They’ve [Tonga] been very cautious about opening their borders, like many Pacific islands,” Fiji-based United Nations coordinator Jonathan Veitch told a briefing last month. “And that’s because of the history of disease outbreaks in the Pacific, which have wiped out societies here.”