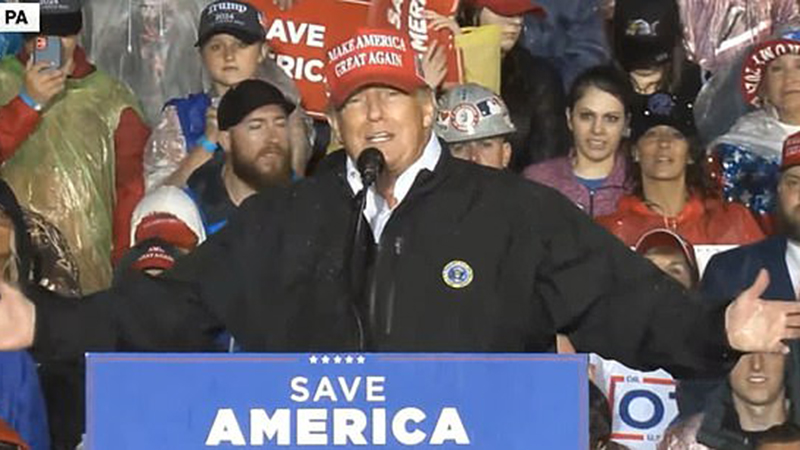 Donald Trump said at a Pennsylvania rally Friday that one of the highest priorities in getting Republicans elected to Congress is to now dissolve President Joe Biden’s new Disinformation Governance Board.

‘One of our highest priorities will be to cut down on left-wing censorship and restore free speech in America,’ Trump said during a rainy, chilly and extremely muddy rally in Greensburg, Pennsylvania endorsing Dr. Mehmet Oz for U.S. Senate. ‘We don’t have free speech.’

‘We don’t have free speech and we have a totally crooked press, all of them back there,’ Trump said, pointing to the cameras and press documenting his latest rally.

‘We will immediately terminate Joe Biden’s so-called disinformation governing board, how about that one?’ Trump said. ‘A chilling and un-American power grab that we will not allow to stand.’

Biden’s Department of Homeland Security (DHS) announced last week the creation of the board, insisting it is aimed at combating misinformation – especially online – related to homeland security issues.

Republicans immediately denounced the board as dystopian and likened it to the Orwellian ‘Ministry of Truth’. They also said it would be another way for Democrats and the government to try and police what conservative voices say online.

Trump basked in this week’s primary results as he took the stage at a rally in the southeastern suburb of Pittsburgh, saying he wasn’t afraid to endorse ‘out of the box’ candidates like Dr. Mehmet Oz.

Oz, the celebrity heart surgeon who is running for the Pennsylvania Senate seat despite not living in the state, is a ‘great gentleman,’ Trump said, before calling him up on stage with him.

In Ohio, Hillbilly Elegy author J.D. Vance was able to cinch a victory in the Republican primary after a last-minute endorsement from the former president. Former Trump aide Max Miller won his race for the House seat vacated by retiring Rep. Anthony Gonzalez, who Trump promised to primary after he voted for impeachment.