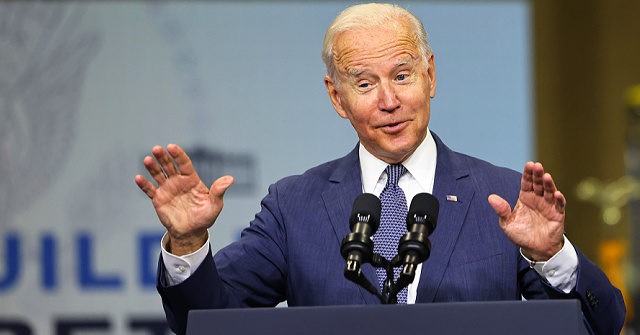 Despite President Joe Biden’s job approval numbers being in the low 30s, Democratic Legislative Campaign Committee (DLCC) President Jessica Post wants to have the president campaign for legislative candidates to help their chances of winning.

In an interview this past weekend, Post urged Biden to campaign for the Democratic state legislative candidates across the country.

“We have a great relationship with the Biden White House, so we hope that translates into seeing President Biden out campaigning for us … for state legislatures,” Post said.

However, while Post wants Biden to campaign for Democratic state legislative candidates across the country, his approval rating is at 32 percent, the lowest in his presidency — with a 57 percent disapproval — on the CIVIQS rolling job-approval average, which gave him a total net approval of negative 25.

In fact, Biden is underwater in 48 states — including the typically dark blue California and his home state of Delaware. The only two exceptions where he was above water were Hawaii and Vermont.

“It should come as no surprise that state Democrats will be standing shoulder to shoulder with President Biden on the campaign trail this fall, as they’ve spent the last 18 months mimicking his failing liberal agenda,” Romeo told Breitbart News.

President Biden has been a disaster for our country and state Democrats are following his lead.

If the @DLCC wants to bring Biden in to campaign for state legislative candidates, that’s cool with us. We’ll even roll out the red carpet for him. pic.twitter.com/7skFkNX6Uf

Romeo continued, “If state Democrats want to campaign with a President who destroyed our economy, raised our gas prices, caused crime to skyrocket in our once-safe communities, and won’t stop the flow of illegal drugs pouring through our borders, they are more than welcome to do so, and the RSLC will be standing by with cameras in hand.”

The DLCC has already lowered its expectations for winning in November. In May, the committee released a new target memo showing that they no longer believe the legislative chambers in Arizona or Pennsylvania can be flipped.

The memo listed the two states under “Reverse Republican Advantages” rather than “Make a Play for Vulnerable GOP Majorities.” The memo cited the “political environment” as a reason why the DLCC believes it can no longer flip the two states.

Romeo noted that state-level Republicans will “have a big November because they remain laser-focused on serving as a counterweight to the chaos that is the Biden presidency by prioritizing the kitchen table issues that Americans care about the most.”