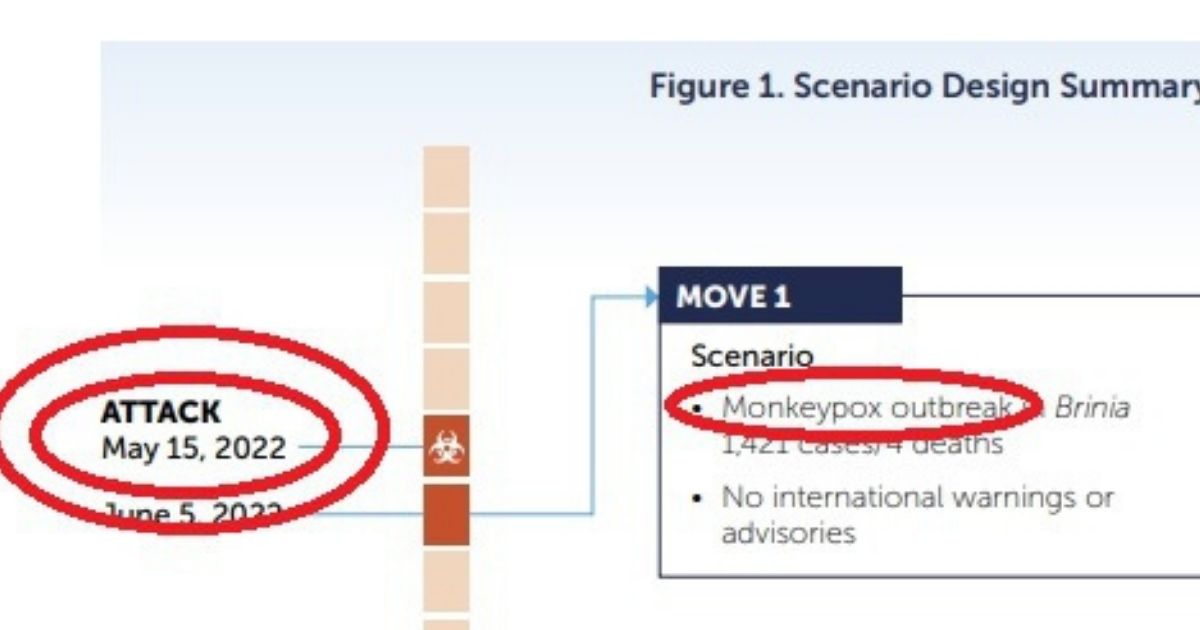 In a November 2021 report, NTI looked at the outbreak of the monkeypox virus in the fictional country of Brinia on May 15, 2022, which was the focus of the March exercise. Under their imaginary scenario, “the initial outbreak was caused by a terrorist attack using a pathogen engineered in a laboratory with inadequate biosafety and biosecurity provisions and weak oversight.”

In the table below (which can be viewed on page 10 of the report), NTI divided their discussions into three “moves.”

In the first move, 1,421 cases of the virus resulting in four deaths are reported in Brinia.

By Jan. 10, 2023, seven months later, the virus has spread to 83 countries. There are 70 million cases worldwide, and 1.3 million people have died. Researchers have learned that the virus was engineered to be vaccine-resistant.

ESPN’s Sage Steele Bloodied and Hospitalized After Being Pelted by Errant Shot at PGA Championship: Report

By May 10, 2023, 480 million cases have been reported, resulting in 27 million fatalities worldwide.

The next $500 billion for Big Pharma? pic.twitter.com/eXbfRpC9Na

NTI identifies “gaps” between nations’ current levels of pandemic preparedness and what would be necessary to deal with a catastrophe of this magnitude. Naturally, NTI emphasizes an international response coordinated by a supranational organization, such as the World Health Organization.

Have you lost faith in the World Health Organization to keep us safe from another pandemic?

I’m not saying the recent, very real outbreak of the monkeypox was engineered. On the contrary, all indications are that it’s naturally occurring.

But it is a remarkable coincidence, isn’t it?

And wouldn’t it be every globalist’s dream come true? There’s nothing like a pandemic to force people to surrender their liberties. Just ask the blue state governors.

“Covid is critical because this is what convinces people to accept to legitimize total biometric surveillance. We need to not just monitor people, we need to monitor what’s happening under their skin”pic.twitter.com/qoPKVGxR7d

WHO Creating New UN-Style Super-Government? Could Take Control, in Some Cases ‘Wherever Necessary’

A new pandemic, as the current one recedes to endemic status, would be every Democrat’s dream come true. We’re less than six months out from a critical election that will determine the second half of the Biden presidency, and prospects are looking pretty dim for the party. But just as COVID-19 tipped the 2020 election, monkeypox, if it really took hold, could sway the midterms. Can lightning really strike twice?

Finally, it’s worth noting that one of the co-chairs of this little exercise is none other than Dr. Ernest J. Moniz, who served as the Department of Energy secretary during the Obama administration.

It’s probably a coincidence as well, but it definitely shows the incestuous nature of the elites — this same group of people seems to run everything and show up everywhere.

The Western Journal has reached out to NTI for a comment on this story.