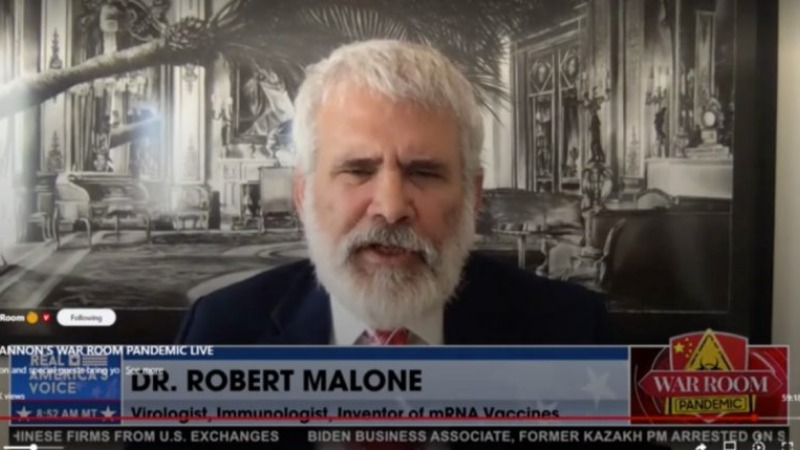 Dr. Robert Malone, the inventor of mRNA vaccines, made an appearance on Steve Bannon’s War Room where he warned about an “Ebola-like hemorrhagic fever” super virus coming out of Communist China that he believes could be caused by mutations arising from mass vaccination.

The inventor of modern mRNA vaccines, Dr. Robert Malone, went on Steve Bannon’s War Room where he warned of a new disease spreading across Communist China that appears to be an “Ebola-like hemorrhagic fever” super virus.

Dr. Malone explained that “vaccinating into a pandemic will drive the development of escape mutants that are resistant to vaccination,” adding that the Chinese Communist Party’s (CCP) mass vaccination campaign “has mirrored that of the western world, and has resulted in a perfect storm of environment for developing a super virus.”

“They are using the language that this is a hemorrhagic fever virus. If that’s the case, then it would be very odd that this is something that would be caused by a coronavirus. That terminology is usually used for viruses in the family of Marburg and Ebola,” he said.

“So, this is something that many people have feared, is the development of a rapidly spreading Ebola-like hemorrhagic fever virus. But we have not knowledge of whether that is going on here or not,” Dr. Malone continued.

Dr. Malone stressed that sending athletes to China for the 2022 Olympics would be “madness,” adding that “there’s no question in my mind that they did not drop the curtain on international travel when they knew that SARS-Cov-2 was ripping through Wuhan.”

“They left the place open through the end of the Chinese New Year, when everybody in China travels around, and they let the populace travel to the United States and the west,” Dr. Malone said.