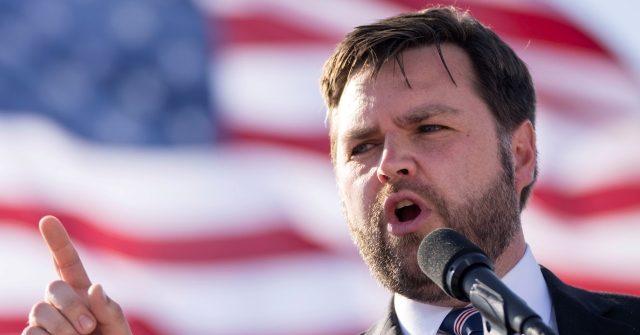 J.D. Vance, the Trump-backed Republican nominee for Ohio’s U.S. Senate seat, told Breitbart News Saturday the Democrat leadership in the country “has benefited from the destruction of what made the country great in the first place.”

Vance, on SiriusXM’s Breitbart News Saturday this weekend, said that it is a “pretty simple argument” that the current leadership in the county benefit from destroying the country while there has been an increase in inflation, a rise in gas prices, an open border, defunding the police, and shipping American jobs to China.

“If you’re a working-class guy in Ohio, you didn’t benefit when they shipped the factories to China, but a lot of American leadership did,” Vance explained. “If you are a suburban mom and just wants to send your kids to school in a safe environment, you did not benefit when [the Democrats] attacked the police and let out a bunch of criminals. But if you’ve got a private security force, you benefit from that just fine.”

Vance’s argument stems from jobs being shipped overseas to China and the Democrats’ continued push for defunding the police since 2020.

The Buckeye State Republican noted that his opponent, Rep. Tim Ryan (D-OH), has voted with President Joe Biden 100 percent of the time and has stood by while he enacts radical policies without showing any leadership for himself.

“If you have lost a kid or somebody else to the fentanyl that’s coming across the American Southern Border, you’ve gotten screwed by Joe Biden and Tim Ryan’s open border policies,” Vance described as part of the problem. “But let’s be honest, there are a few powerful people who have really benefited from the influx of new labor and new Democratic voters.”

Ryan — the 20-year career politician who had a failed 2020 presidential run to become a Biden surrogate later— has voted with Biden 100 percent of the time in Congress while he has been the president, according to FiveThirtyEight, which keeps a “tally of how often every member of the House and the Senate votes with or against the president.” Ryan never voted against him.

Additionally, the Democrat also voted with House Speaker Nancy Pelosi 100 percent of the time during his time in the House, and according to ProPublica, he has voted with the Speaker not just in the current Congress but also in the last Congress.

Vance added that the “really simple” and “basic argument” to “stop this craziness” from the Democrats is to “go back to policies that make some sense.”

He explained, “Let’s support our police officers, throw the bad guys in jail. Let’s close the border. Let’s stop shipping our jobs to China. And let’s bring some basic sanity back to American public schools in American public life.”

The Buckeye State Republican noted “most people” support these policies, “which is why I think [Republicans are] gonna win and win big in November.”

Last week, in the first poll since the unprecedented Mar-a-Lago raid, Emerson College Polling showed that Vance and Republicans had overtaken Democrats in the Buckeye State. Vance led Ryan by three points, 45 percent to 42 percent.

In fact, when the voters were asked, “regardless of whom they support, which candidate they expect to win,” a majority of the respondents (52 percent) said Vance would win, compared to the 48 percent who said Ryan.

Additionally, a Trafalgar Group poll released this week showed that Vance also led Ryan by five points, 50 percent to 45 percent. The polls coming out a week apart spell trouble for Ryan, as both show Vance beating him.