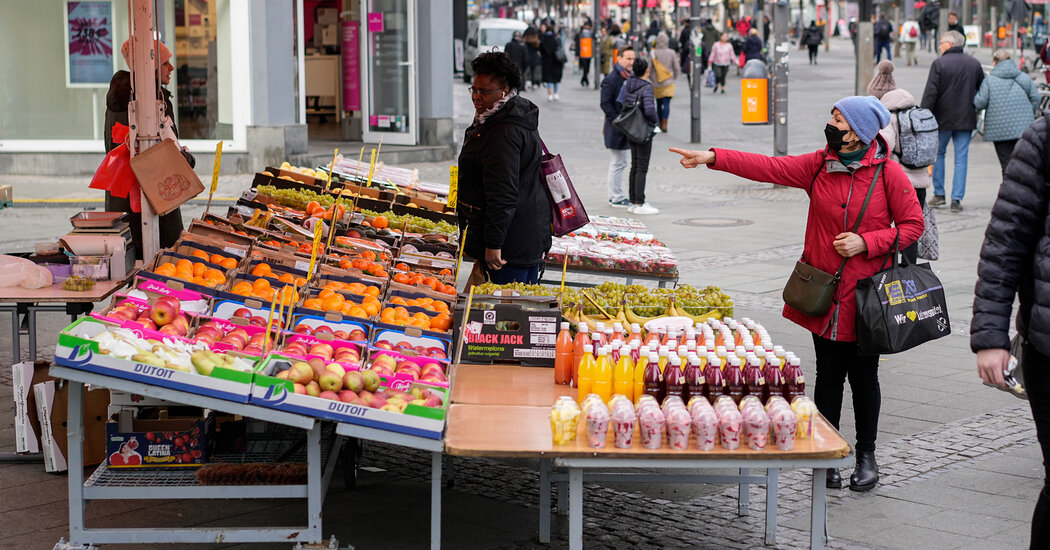 Rising prices, flagging consumer confidence related to the war in Ukraine and continuing supply chain disruptions have slowed growth across much of Europe and heightened worries about the region’s recovery from the pandemic.

The 19 countries that use the euro saw their economies grow by just 0.2 percent overall during the first three months of the year compared with the previous quarter, Eurostat, the Europe Union’s statistics agency, reported on Friday

“Clearly the picture for the first quarter is one of pretty weak growth,” said Ángel Talavera, head of European economics at Oxford Economics. “Consumer confidence has tanked everywhere pretty sharply,” he noted, adding that household spending slowed as wages failed to keep pace with inflation, particularly in food and energy.

The figures for gross domestic product, the broadest measure of economic output, varied across the eurozone. Germany, with the largest economy in Europe, reported a 0.2 percent increase in G.D.P. for January, February and March compared with the previous three months, bringing its year-over-year growth to 4 percent.

“The economic consequences of the war in Ukraine have had a growing impact on the short-term economic development since late February,” the Federal Statistics Office of Germany said in a statement.

The Spanish economy grew 0.3 percent in the first quarter although the improvement was much smaller than the 2.2 percent recorded in the last quarter of 2021.

In France, where Covid restrictions remained in place for much of the first quarter, growth stagnated. In Italy, real G.D.P fell by 0.2 percent from the previous three months.

Inflation has been a persistent thorn, rising to an annual rate of 7.5 percent across the eurozone in April from 7.4 percent in March, according to Eurostat.

Inflation is “stubbornly high,” said Melanie Debono, senior Europe economist for Pantheon Macroeconomics. Food and other prices rose sharply. While energy prices fell 3.7 percent this month, they are still more than a third higher than last year. “There is a squeeze in real incomes for households,” she said.

Ms. Debono expects growth to pick up over the next three months, as pandemic-related restrictions ease and activity in the service sector picks up. Still, the outlook for the rest of the year is darkening.

Risks, especially those related to a possible energy embargo and other disruptions caused by Russia’s invasion of Ukraine, have intensified. This week, Russia cut off gas supplies to Poland and Bulgaria. At the same time, the European Union has been inching closer to an agreement to stop the flow of Russian oil.

The impact of an abrupt halt in Germany’s energy supply has generated sharp debt. The Bundesbank, the country’s central bank, recently warned that a gas embargo would cause the country’s economic output to decline by as much as 5 percent this year.

Some economists have offered a more optimistic estimate, but Ms. Debono of Pantheon said that a gas embargo would almost certainly throw Germany into recession and would probably “drag the rest of Europe down with it.”

Average growth among the 27 countries that make up the European Union was 0.4 percent in the first three months of 2022, Eurostat stated, twice the figure reported for the eurozone.

The U.S. economy, by contrast, contracted by 0.4 percent during the same period. Still, analysts tended to be more sanguine about the American economy’s prospects, noting that consumer spending remained strong despite high inflation. If anything, resilient demand in the United States compared with the rest of the world made the figures look somewhat worse: America’s appetite for imports far outpaced its exports to other countries. The resulting trade deficit shaved down G.D.P.

China, despite widespread lockdowns, reported a 1.3 percent increase in its quarterly growth.

Within Europe, the economies of Portugal, Austria and Latvia all expanded by more than 2 percent during the first quarter, while Sweden registered the worst performance with a drop of 0.4 percent.

Intense uncertainty has prompted anxiety about the global economy. Last week, the International Monetary Fund revised its growth estimate to 3.6 percent from the 4.4 percent it predicted in January. The growth forecast for the eurozone was gloomier, declining 1.1 percent to 2.9 percent for the year.

Russia’s invasion of Ukraine “will have severe economic consequences for Europe, having struck when the recovery from the pandemic was still incomplete,” the I.M.F. said in its most recent regional outlook. “The war has led to large increases in commodity prices and compounded supply-side disruptions, which will further fuel inflation and cut into households’ incomes and firms’ profits.”