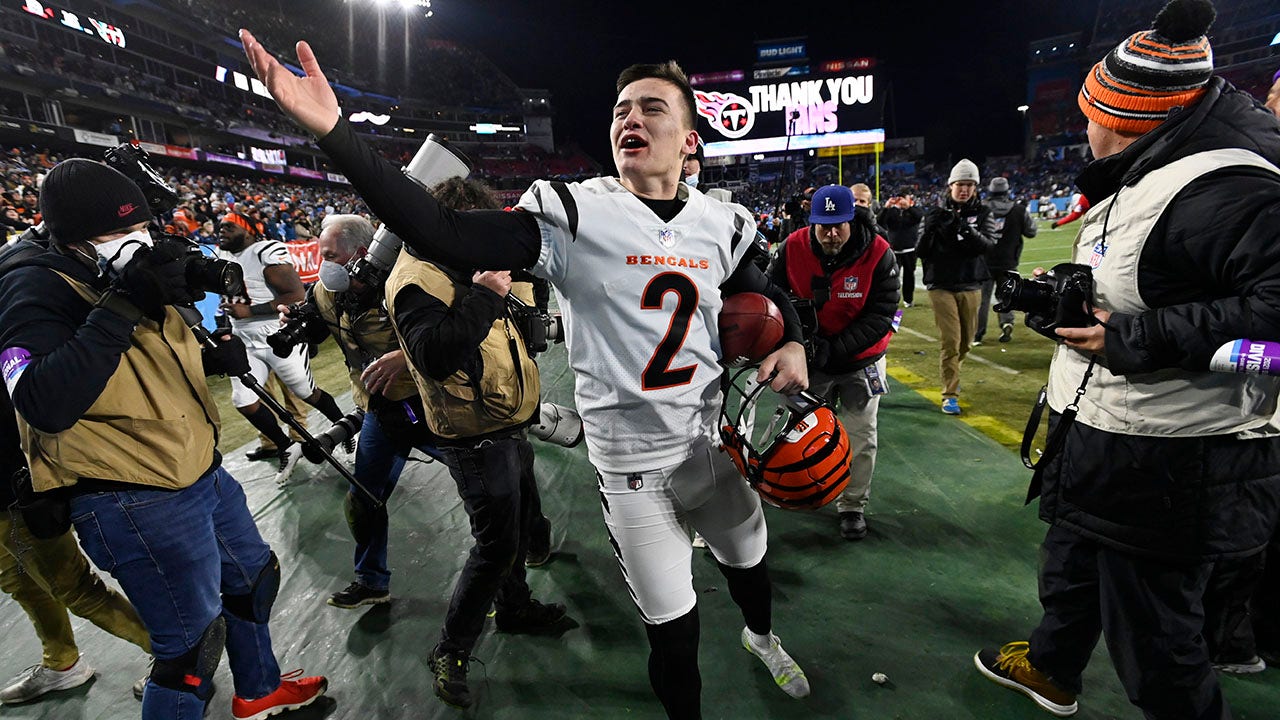 Rookie kicker Evan McPherson booted a 52-yard field goal as time expired to lift the fourth-seeded Cincinnati Bengals to a 19-16 upset victory over the top-seeded Tennessee Titans in the divisional round of the playoffs.

Cincinnati Bengals quarterback Joe Burrow (9) pases from the pocket against the Tennessee Titans during the first half of an NFL divisional round playoff football game, Saturday, Jan. 22, 2022, in Nashville, Tenn.
(AP Photo/John Amis)

McPherson connected on 4-of-4 field goals in the game. With the win, the Bengals advanced to the AFC Championship Game for the first time in 33 years. Cincinnati also won its first road game in the postseason in franchise history.

“He’s got ice in his veins,” Bengals quarterback Joe Burrow said of McPherson. “There’s not much more to be said. He’s just as cool as it gets.”

The Bengals’ defense rose to the occasion by intercepting Titans quarterback Ryan Tannehill three times, which set up two of McPherson’s field goals. Bengals linebacker Logan Wilson came away with the final interception with 20 seconds left in the fourth quarter at the Bengals’ 47-yard line. On Cincinnati’s ensuing drive, Burrow connected with rookie wide receiver Ja’Marr Chase for a 20-yard strike, which set up the game-winner from McPherson.

Burrow, who was sacked nine times in the game, completed 28 of 37 passes for 348 yards with no touchdowns and one interception. Chase hauled in five receptions for 109 receiving yards. Bengals running back Joe Mixon ran for the Bengals’ only touchdown, a 16-yard score on their first drive of the third quarter.

“We found a way all year,” Burrow said. “Man, crazy, crazy game. That’s a really, really good team. Unbelievable defensive line. They had a great plan on defense. Credit to them, we found a way at the end.”

The Titans’ season came to a disappointing end once again. It was their third-straight loss on their home field as the AFC’s No. 1 seed. They haven’t won at home since January 2003 in the postseason.

The Bengals will take on the winner of the Buffalo Bills and Kansas City Chiefs next week.