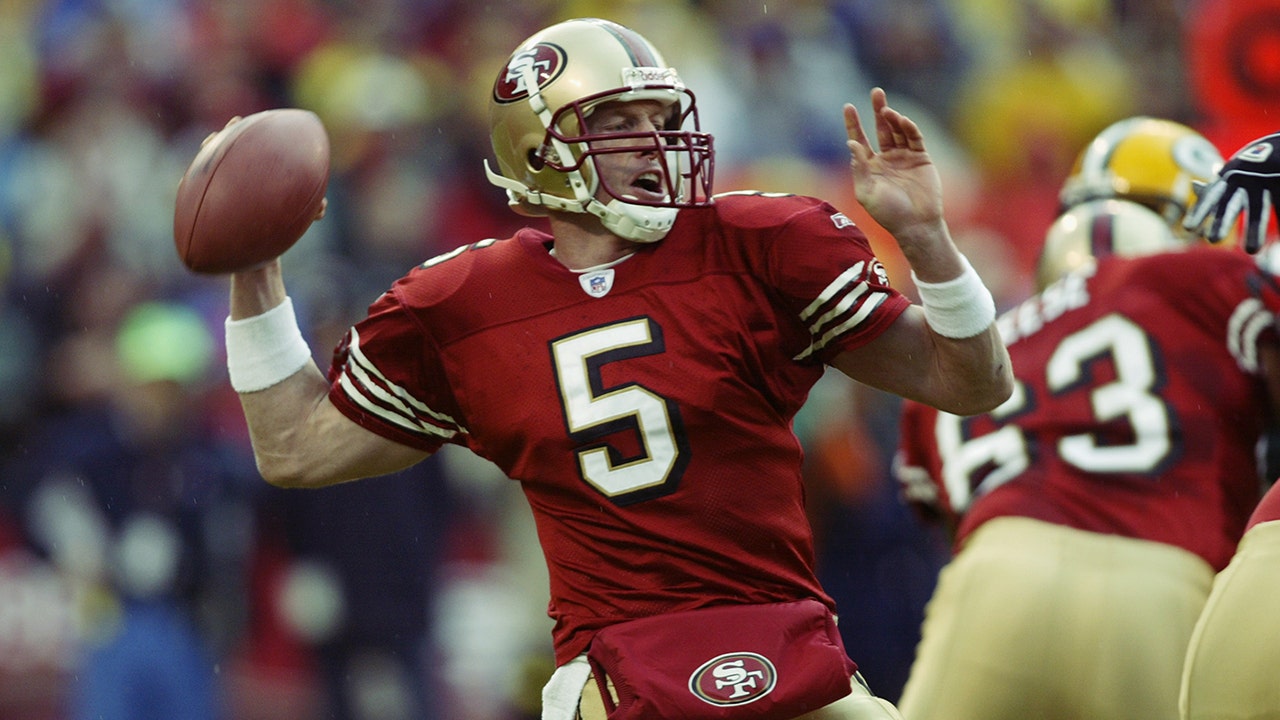 Former San Francisco 49ers quarterback Jeff Garcia said Friday there was “nothing sexist” about comments he made about ESPN NFL analyst Mina Kimes lacking football knowledge because she never played the game.

Garcia came under fire when he snapped in an Instagram comment over Kimes’ analysis of 49ers quarterback Jimmy Garoppolo. Garcia appeared on 95.7 The Game in San Francisco to explain himself.

Jeff Garcia of the San Francisco 49ers runs for a touchdown against the Arizona Cardinals during an NFL game Dec. 7, 2003, at Candelstick Park in San Francisco.
(Jed Jacobsohn/Getty Images)

“Well, first of all, I don’t owe anybody an apology for my beliefs and my experience at playing the quarterback position,” Garcia said. “The difficulty of that position, the expectation on that position, how qualified you have to be one of 32 starters in a National Football League from a mental and physical standpoint. People want to comment and tear down individuals based upon statistics. The only statistic that matters right now is are you winning or losing games.

“There was nothing sexist from what I had to say, outside of the fact that, yes, women don’t play professional football, there are women that do participate in football, but had it been a man saying the same thing, I would’ve had the same response for that man who has never stood in the pocket, who has never delivered a touchdown pass, has never taken a hit to the head while trying to make a play from within the pocket.

“To be able to sit there and criticize someone at the level Jimmy Garoppolo is at, at the level any of these quarterbacks are at, at the level that I played at and say that it was sexist, misogynistic — people wanted to say there was racism behind it — people wanted to break me down as a player. What you think, whatever you want to say, it doesn’t matter to me. All I care about are what Niners fans and faithful think, what my family thinks, what my close friends think. That’s all that matters.”

The four-time Pro Bowler said his comments had nothing to do with Kimes being a woman and more about showing his support for Garoppolo.

“There was a post from my feed that came from a 49ers faithful. It was in his post where he screenshot what Mina had said based upon the video,” Garcia added. “He shared the video. I made a comment on his post, or at least that’s what I thought I was doing, to the 49ers faithful saying, ‘Hey, I’m behind Jimmy. He knows he has to play better. We’re all self-critical at this level of how we play the game’. It just so happened that she was the mouth on the end of the video post that was shared. …

“If it would’ve been anybody else ripping into the 49ers quarterback, I would’ve said the same thing. It had nothing to do with the fact that she was a woman, it just so happened to be the timing that I caught the subject matter. I don’t care what anybody else has to say.”

“Who the hell is Mina Kimes and when is the last time she threw a touchdown pass in a game? NEVER! EVER!” Garcia wrote in an Instagram comment. “Has she taken a snap or can truly understand the ability, the mindset and the physical and mental toughness, that it takes to play the QB position or any position in the NFL. The fact that there are people out there given a platform to talk about something that they have never done is hilarious and that’s how you have to look at her, she’s a joke! So let’s just laugh at her and support Jimmy, root on our Niners to go out and beat the living f— out of one more team. That’s what it takes. She will never know that feeling. Can I get an AME? Peace.”

Kimes had said Garoppolo was the “definition of being part of the group project that gets an A while doing none of the work.”

The post was shared on social media throughout the day Thursday.

“Apparently I was the only person last week to point out Jimmy Garoppolo didn’t play well,” she tweeted, but later deleted

Criticism of Garoppolo going into the NFC Championship may be warranted.

He’s failed to throw a touchdown pass in both his playoff starts. He was only 11-for-19 in the narrow victory over the Green Bay Packers. He also threw a pick and was sacked four times.

Garoppolo has completed 20 or more passes in only two of his last five games, though he threw under 20 passes in the win over the Packers due to snowy conditions.

In his last game against the Rams, Garoppolo was 23-for-32 passing for 316 yards, two interceptions and three sacks. San Francisco won the game, its sixth straight against Los Angeles.