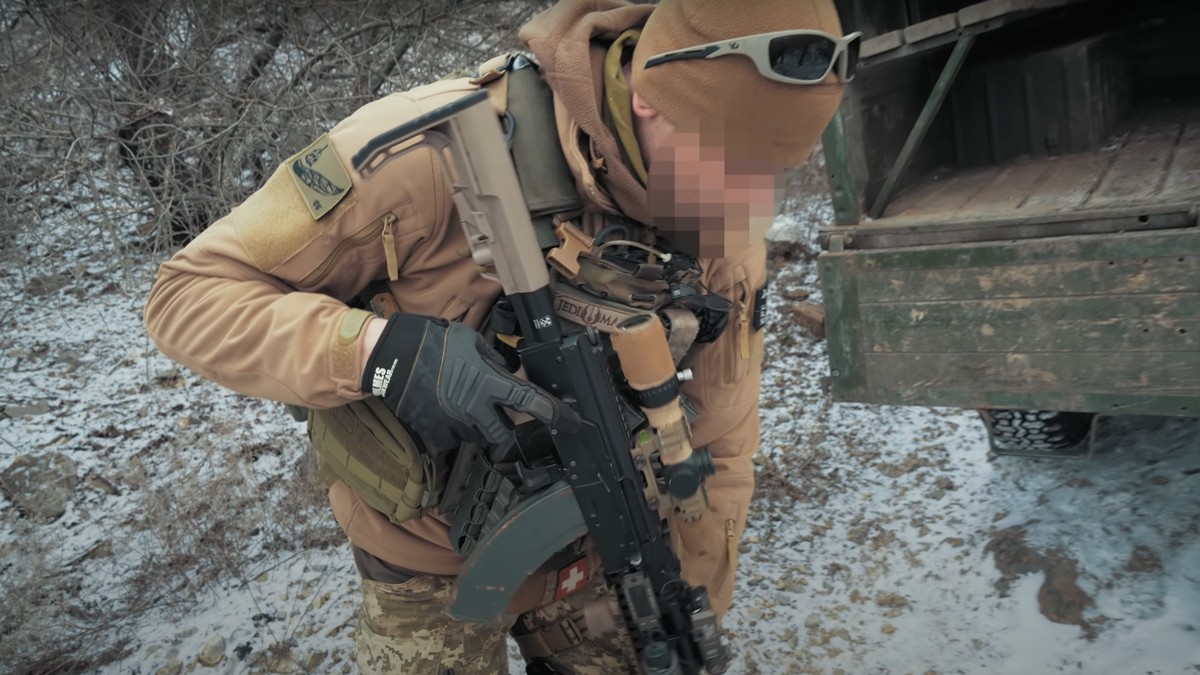 An unknown man seen in an image from Forward Observations Groups’ social media promotion of a trip to Ukraine.

An ex-U.S. soldier who came under fire for visiting the front line of the war in eastern Ukraine with the help of a far-right fighter, recently reappeared in war torn Donbas region as heightened tensions in the region near a fever pitch. Russian media wasted no time in using his presence among Ukrainian troops as proof of American mercenaries in Ukraine.

Russian state-controlled RT described Derrick Bales, who said he was in the 173rd Airborne Brigade and did a tour in Afghanistan, and other alleged American vets he was with as “soldiers of fortune” who went to Donbas with Ukrainian regulars. The article notes without any evidence that “Russian commentators” (they are never identified by name) say there might be American veterans currently training Ukrainian military personnel as a war looms.

Bales, who runs a military lifestyle brand called Forward Observations Group, posted a series of photos and videos showing his group navigating through the trenches and checkpoints of the frozen front line of eastern Ukraine. In one scene posted to the FOG Instagram page, he wears a military helmet and flak jacket, while interviewing an unnamed senior commander of a Ukrainian unit who is carrying a Kalashnikov rifle.

“They are really motivated to protect their country and do their job very well,” says the officer referring to his men, walking alongside a man who appears to be Bales.

In response to RT, a media company the U.S. government alleges as part of Kremlin disinformation warfare operations, the American vet said he wasn’t putting his U.S. military-trained skills to use for money in Ukraine.

Instead, Bales claims he was merely there to shoot a documentary for his lifestyle brand.

“Lol not fighting,” said Bales over a text message exchange with VICE News. “Those are [Ukrainian army] soldiers from the 53rd mechanical infantry. Their Lt COL. Is the dude I’m interviewing in the video.” (RT also identified the Ukrainian unit as the 53rd.)

Russian Defense Minister Sergei Shoigu recently made headlines after accusing the U.S. government of sending American mercenaries to Donbas supplied with chemical weapons in preparation for an escalation in the conflict.

“We have identified the presence of over 120 members of U.S. mercenary groups in the cities of Avdiivka and Krasny Liman to commit provocations,” said Shoigu in Moscow last week, claiming that “tanks filled with unidentified chemical components were delivered” to Ukrainian forces by the same alleged mercenaries.

The State Department called those allegations false and said in an official statement that it is “aware of several Russian military and intelligence entities that are engaged in information confrontation targeting Ukraine.” The Ukrainian government also contradicted any assertions that the West has sent mercenaries to its rescue and instead accused Moscow of actively recruiting mercenaries for its proxy-war in eastern Ukraine backing separatist paramilitary groups.

The Biden Administration is in diplomatic crisis talks with Russian President Vladimir Putin’s regime over its massive troop buildup along the Ukrainian border. In response, the U.S. and its NATO allies have sent weapons and military aid to Kyiv, with reports that it will support a Ukrainian insurgency against Russian troops should the invasion take place. Earlier in the week, the Pentagon announced that it put 8,500 American troops at the ready for deployment to allies across Eastern Europe should the conflict take a turn for the worse.

“I mean I’m posting to (200,000) people,” said Bales, who wasn’t surprised that Russian media picked up on his exploits in Ukraine and mischaracterized it. “I’m not that naive on who is going to see it. Hopefully I can do the story justice with the documentary of the trip.”

Bales also said that he has returned home to the U.S. and that the RT report suggesting he’s still in Ukraine is inaccurate.

Former U.S. service members showing up in the war in Ukraine as volunteer fighters has been a very real problem.

One ex-U.S. soldier is currently facing extradition from Ukraine and is under a Department of Justice probe for war crimes stemming from actions he took as a volunteer fighter  with an extremist organization operating a military position in Donbas. In the fall of 2020, two Americans were deported from Ukraine for terrorism-related crimes and for trying to join the Ukrainian military to fight. One of those men was Ryan Burchfield, a former Marine dropout and member of American neo-Nazi terror group the Base.

Experts have asserted for years that the war in Ukraine has become a destination for foreigners from all over the world looking to gain war experience for their various political and extremist movements. Moscow has partly seized on the problem of foreign fighters to Ukraine as evidence of the inherent neo-Nazi sympathies corrupting the Ukrainian government, which is currently being led by a Jewish president.

The Daily Beast reported this week that Russia was planning to redeploy a neo-Nazi mercenary group connected to the Kremlin’s army-for-hire, the Wagner Group, to eastern Ukraine with an eye for utilizing it in any escalation in the war. (The Kremlin claims it does not have any involvement with the Wagner Group, which the U.S. believes is run by a close friend of Putin.)