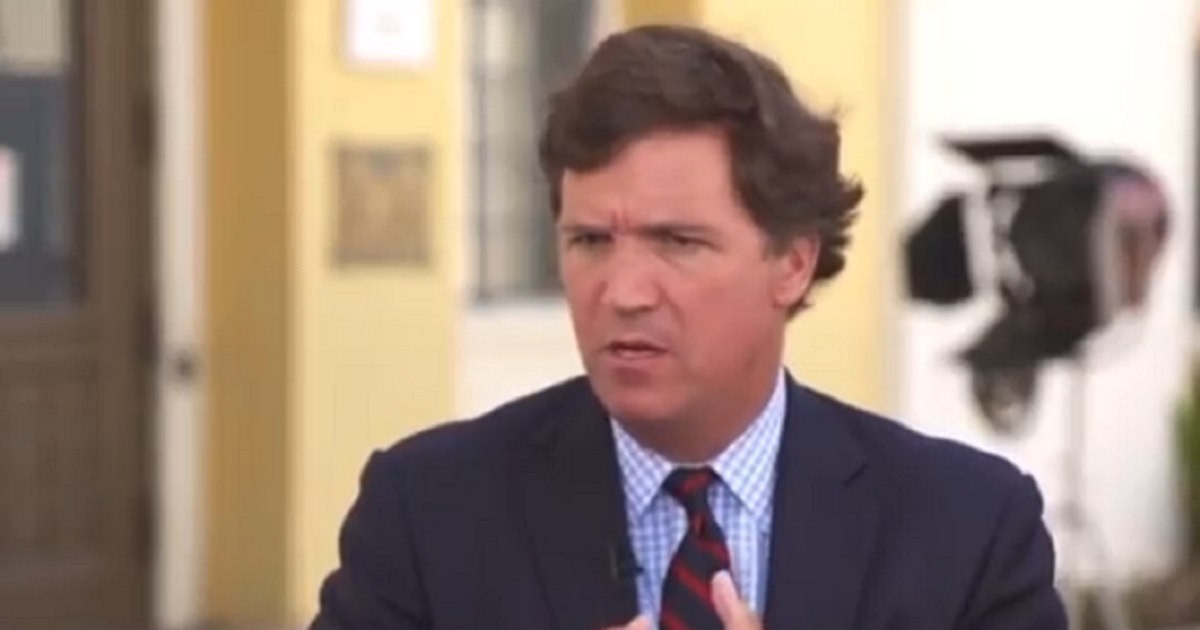 It was a moment too good to be true, at least for the left: Tucker Carlson was apparently telling male viewers to tan their testicles in order to up their testosterone levels.

It wasn’t just tweets, either; there were plenty of racy headlines. Vanity Fair: “Tucker Carlson: Tan Your Balls If You Want to Be a Real Man.” Newsweek: “Tucker Carlson’s Testicle Tanning ‘Very Misleading,’ Health Experts Say.” IFLScience: “Please Don’t Tan Your Testicles, Even If Tucker Carlson Tells You To.”

Except Tucker Carlson didn’t tell you to. What he did do was interview a guy who suggests alternative therapies to counteract lowering testosterone levels, one of which involved “red light therapy.” But that doesn’t get the clicks, now, does it?

(Every day, mainstream media lies like these slip through the cracks — and here at The Western Journal, it’s our job to catch them. We’ll do our best to keep the legacy media honest — and you can help us by subscribing.)

In case you missed the whole kerfuffle: In a promo for an episode of his Fox Nation streaming show, “Tucker Carlson Originals,” Carlson addressed declining levels of the hormone testosterone and the role it plays in fitness. His guest was Andrew McGovern, identified as someone “in the fitness business” whose “obsession is, how do you reverse the effects of falling testosterone?”

Elon Musk, Net Worth of $255 Billion, Says He Doesn’t Own a Home and Bounces Between Friends’ Spare Rooms

Whether you buy this guy’s advice regarding that obsession is up to you. Some of it seemed to be pretty common-sense stuff: “Eat whole foods, eat predominantly meat, animal-based products,” for starters. He also advised us to avoid exposure to certain chemicals, which is where it got a bit dodgy.

For instance, the biggest thing to avoid: “Fragrances. If you can just eliminate fragrances in your household products, cosmetics, deodorants, toothpaste with fluoride and such. Plastics, microplastics have been found in human blood now, so try to drink out of glass, metals.”

Take from that what you will. This guy might be 100 percent right, although I can’t help but think about Col. Jack Ripper in “Dr. Strangelove” ruminating on fluoridation and our precious bodily fluids. But, your mileage may vary.

Then we got to the red-light therapy: “You saw on the clip there, if you want to optimize and take it to another level, expose yourself to red light therapy,” McGovern said.

“Which is testicle tanning,” Carlson said.

“It’s testicle tanning, but it’s also full-body red light therapy, which has massive amount of benefits and there is so much data out there that isn’t being picked up on or covered,” McGovern said.

“So obviously, half the viewers right now are like: ‘What?’ Testicle tanning, that’s crazy,” Carlson continued.

“But my view is, OK, testosterone levels crash and nobody says anything about it. That’s crazy. So why is it crazy to seek solutions?”

McCarthy said it wasn’t and talked about how he’d coined the term “bromeopathy” for what he was doing. Cue Ron Filipkowski, leftist social media clip-monger extraordinaire, who tweeted this:

In his new special on how to raise testosterone levels in men, Tucker Carlson’s guest suggests “testicle tanning” using infrared light as a “bromeopathic” therapy. pic.twitter.com/PirerBMRyr

On the leftist end of the journalistic spectrum, this quickly transmuted into Tucker Carlson himself recommending “testicle tanning.”

“You may be a man, but are you a real man? The kind of guy who wrestles his jacked friends and throws giant tires?” Vanity Fair’s Eric Lutz asked in the first paragraph of his piece.

“The sort of guy who milks cows and chugs glasses of raw eggs, just because? No? Well, do you want to be? Because if so, famously rugged tough guy Tucker Carlson has the solution for you: ‘testicle tanning.’”

Nowhere in this interview did Carlson recommend the therapy, which is exactly what Vanity Fair’s headline said. They weren’t the only ones. Plenty in the media parsed this interview as Tucker Carlson straight-up recommending his viewers undergo testicular tanning.

It’s obviously true the topic was discussed, but a recommendation was not involved. This is anything but a distinction without a difference. Media claims that Carlson endorsed the therapy erupted — and he did nothing of the sort. He merely invited someone on, during a show about diminishing testosterone levels, to talk about alternative therapies.

Television shows of all stripes bring on so-called experts all the time to talk about a wide variety of unproven nostrums to ease joint pain, facilitite weight loss, increase energy, recover youthful skin or whatever..

No one bats an eye when some dubiously credentialed nutritionist or chiropractor recommends apple cider vinegar or passionfruit extract for whatever ails you. As long as they don’t explicitly say will work, it doesn’t draw much attention — nor should it.

Was it wise for Tucker Carlson to use the words “testicular tanning”? Probably not.

Alliteration is irresistible to headline writers of every political stripe, and it should have been a given for a media pro that it had the potential to turn a serious subject into an object of mockery. (Given the topic, and the predictably juvenile behavior of the vast majority of Carlson’s liberal critics, the reaction was practically inevitable.)

However, Carlson’s own words show he didn’t recommend the therapy, contrary to the gleeful reports.

The whole matter says far more about the world of journalism in 2022 than it does about Tucker Carlson.

We’re at the point where we have to fact-check pieces about “testicular tanning.” Nice work.