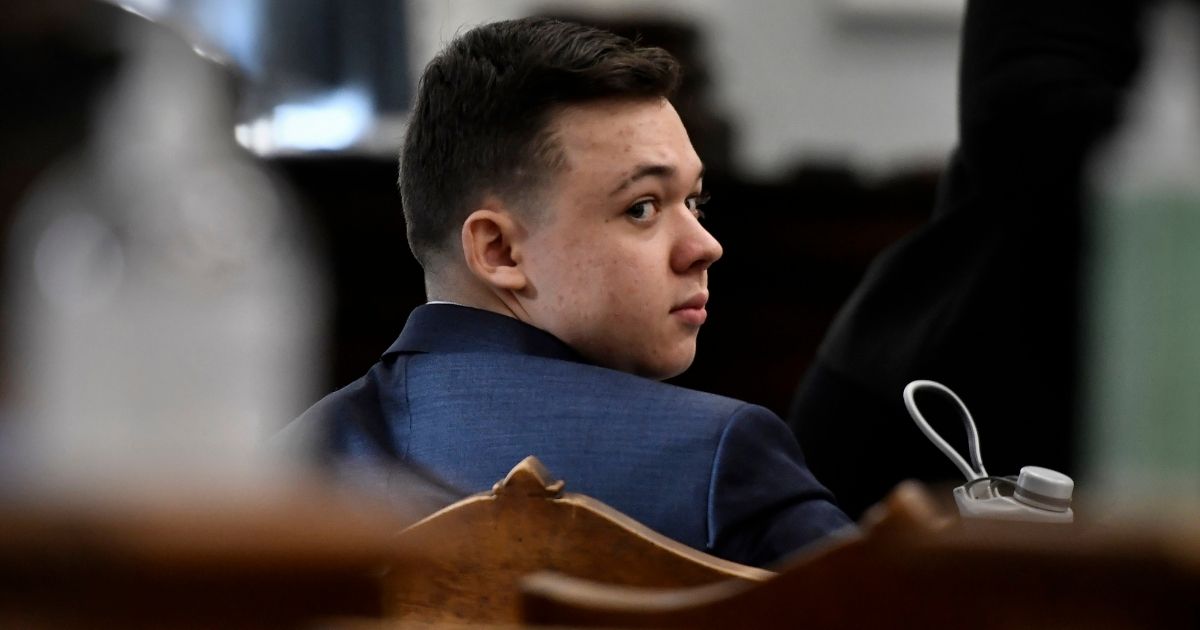 Shockingly, as the jury in the trial of Kyle Rittenhouse was preparing to enter deliberations on Monday, Judge Bruce Schroeder felt compelled to tell the jurors to ignore everything President Joe Biden had said about the case.

The 18-year-old is on trial for shooting three men, two of them fatally, during the racial justice riots that took place in Kenosha, Wisconsin, on Aug. 25, 2020. Rittenhouse has said he shot them in self-defense.

Schroeder felt compelled to give such instructions on Monday because, on multiple occasions, Biden had insinuated Rittenhouse was some sort of “white supremacist.”

There’s no other way to put it: the President of the United States refused to disavow white supremacists on the debate stage last night. pic.twitter.com/Q3VZTW1vUV

As it turns out, new FBI evidence seemingly proves that Rittenhouse is no white supremacist. During the trial, it was revealed that the FBI had gained access to Rittenhouse’s phone and, upon searching through it, found no evidence the defendant had ties to any white supremacist groups.

On the second day of the trial, Kenosha Detective Martin Howard was brought to the stand and questioned about phone evidence taken from Rittenhouse, Gaige Grosskreutz (the third man Rittenhouse is charged with shooting, who survived) and others investigated in connection with the incident.

“In this case, there’s a lot of … interest in subject’s cell phones, correct?” defense attorney Mark Richards asked Howard. “There are some cell phones that are not … crackable. And that means that unless you have the exact finger code or fingerprint or something, it can’t be opened, correct?”

“Yes, Mr. Rittenhouse’s phone was on the latest iOS and there was not software available at that time,” Howard responded.

Do you think Kyle Rittenhouse is a white supremacist?

“And that, in 2020, when you seized Mr. Rittenhouse’s phone — you wanted to get in the phone, you immediately sent it to the FBI so that it could be opened or cracked and they told you they couldn’t do that, correct?” Richards continued.

“And myself and Mr. Rittenhouse found out about that, correct?” Richards asked. “And we said, ‘You want to get in his phone? We’ll give you the code as long as we get a copy of whatever you take … And those arrangements were made and his phone was downloaded. So there’s nothing hidden.”

According to a Rev.com transcript, Richards went into further detail during the defense’s closing statements in the trial concerning the FBI’s role in examining Rittenhouse’s phone.

“The detective testified that my client’s phone was sent to the FBI,” Richards said. “It was unsearchable because of the operating system. The FBI and the federal government had not cracked it yet. We found out about that. We had nothing to hide. ‘Here. Here’s the numbers. Search the phone as long as we’re given a simultaneous copy, so we have what you have.’”

“We did that. We gave that to the state. If we had something to hide, they never would’ve gotten in that phone. They took the phone. They made a copy. They searched it. Low and behold, nothing of an incriminating nature in it, nothing militia, white supremacist, any of that,” Richards said.

The New York Post’s Miranda Devine put together a report on Wednesday similarly debunking this lie and many others surrounding the Rittenhouse case.

@GeraldoRivera is a disgrace for refusing to retract his smear of Kyle Rittenhouse as a white supremacist when @BonginoReport raised it on @seanhannity. The FBI scoured the kid’s phone. Found nothing. The media needs to account for the lies they have told about him.

“When White House press secretary Jen Psaki was asked to explain why recently, she slyly slimed Rittenhouse again, without naming him, as a ‘vigilante,’” Devine wrote. “In one story, the Intercept used the term ‘white supremacist’ 16 times.

“The accusation has become holy writ, but there is zero evidence. The FBI scoured Kyle’s phone and found nothing about white supremacy or militias, the court heard. All they saw were pro-police, ‘Blue Lives Matter’ posts from a kid who had been a police and fire department cadet, wanted to be a police officer or paramedic and once sat near the front of a Trump rally. That was enough for the media to brand him a white supremacist.”

While live-tweeting the trial on Monday, Chicago Tribune reporter Stacy St. Clair said that while Rittenhouse’s phone contained “nothing connecting him with militia and white supremacy groups,” he was seen “hanging out at a bar with members of the Proud Boys.”

Richards says when they turned over Rittenhouse’s phone, there was nothing connecting to him with miltia and white supremacy groups.
Of course, others have posted pics of him since the shooting hanging out at a bar with members of the Proud Boys.

St. Clair seemed to think this was an indication of Rittenhouse’s supposed white supremacy, which is odd, considering who the leader of the Proud Boys is.

Now, the Proud Boys are a controversial group. On multiple occasions, the right-wing coalition has chosen to fight violence with more violence, often proking altercations with similarly minded left-wing groups, such as antifa.

That being said, no matter what the establishment media says, the implication that the Proud Boys are an overtly racist, white supremacist organization is baseless.

Furthermore, members of the group were seen taking pictures with Rittenhouse at a bar following the shooting. How is he supposed to control who he will run into at a bar? Also, how is he supposed to know the affiliations of every single person who asks to take a picture with him?

Despite these facts, it wasn’t Biden alone who made the baseless claim that Rittenhouse is a white supremacist.

Numerous other blue-check liberals, Democratic politicians and even establishment media outlets have either suggested or declared as much without providing any evidence to back up their claims.

Do you think Rittenhouse is a piece of shit white supremacist who went to the protest to provoke black people and left-wing protesters or do you think he’s a good guy defending property? I know you’re a total grifter now but I’m wondering if you’ve become a white supremacist yet? https://t.co/5wvbj9lBRe

When we marched in Ferguson, white supremacists would hide behind a hill near where Michael Brown Jr. was murdered and shoot at us.

If Kyle Rittenhouse gets acquitted, it tells them that even 7 years later they still can get away with it.

Only the best treatment for white supremacists in America. https://t.co/5tsiY4Saqc

The racial justice riots following the death of George Floyd in police custody destroyed the lives of small business owners and other hard-working Americans throughout 2020. Leftists don’t want you to believe this happened, but it did.

They want you to believe that Kyle Rittenhouse traveled to a peaceful protest with the sole intention of killing supporters of Black Lives Matter. In reality, he went there to save lives and protect livelihoods.

In reality, many of these same leftists and liberals now lying about Rittenhouse are responsible for enflaming tensions in 2020.

These people are the reason Kenosha needed armed protection in the first place.