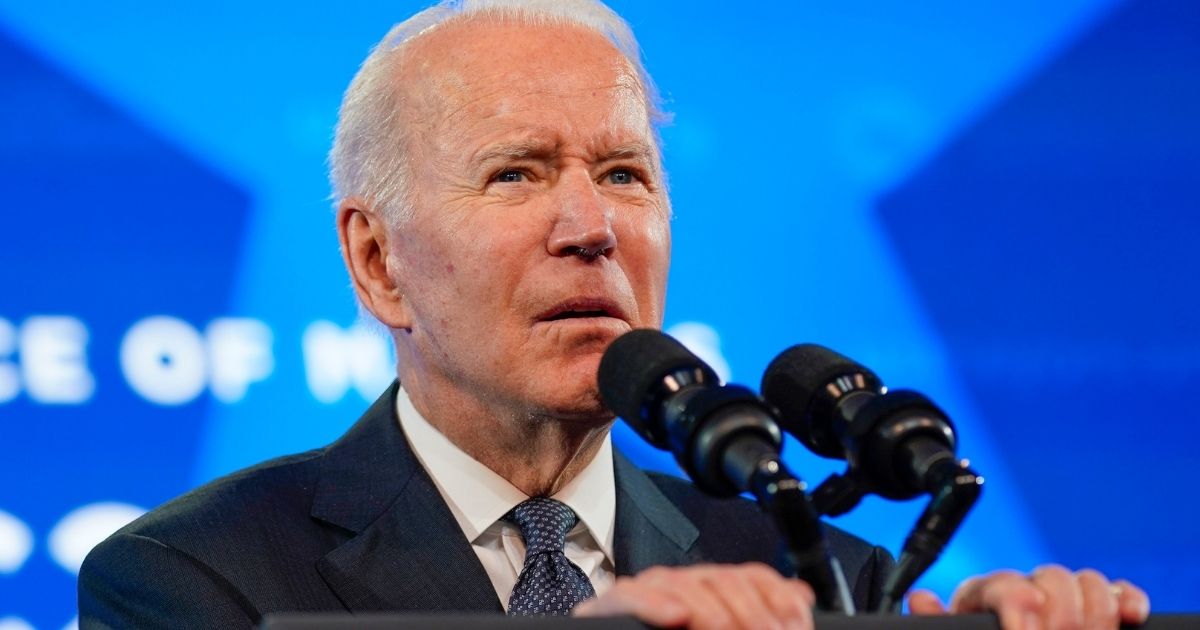 Remember when politicians implying elections were “illegitimate” was an attack on our democracy? I remember it like it was yesterday. Or earlier this month, rather.

One year after the Capitol incursion, we were reminded that the merest question about the legitimacy of the outcome of an election could set us down the primrose path to a violent coup carried out by shirtless men wearing face-paint and horns. Because of Donald Trump and the Republicans, Jan. 6, 2021, was the closest we had come to seeing the overthrow of our republic. (All poppycock, of course — something we’ve been pointing out whenever we can here at The Western Journal. You can help us bring readers the truth about Jan. 6 by subscribing.)

Then, the following week, Democratic Sens. Joe Manchin of West Virginia and Kyrsten Sinema of Arizona refused to do away with the filibuster to pass the Democrats’ sweeping voting overhaul legislation.

During President Joe Biden’s disastrous media briefing marking one year in office last Wednesday, he said the 2022 midterm elections “easily could be illegitimate” if the bills weren’t passed. You know what that means: questioning elections, even if they haven’t happened yet — again! And while the White House scrambled to spin what the president said into something it wasn’t — insisting his words were taken out of context and the midterms would be legitimate — other Democrats didn’t get the message.

In the days since the president’s remarks, several high-profile congressmen have cast doubt upon this November’s elections, throwing around shadowy theories about “Donald Trump and his allies” conspiring to rig the vote in the GOP’s favor.

The floodgates were opened during Wednesday’s media briefing when a reporter asked Biden about the failure of the voting overhaul legislation: “If this isn’t passed, do you still believe the upcoming election will be fairly conducted and its results will be legitimate?”

“Well, it all depends on whether or not we’re able to make the case to the American people that some of this is being set up to try to alter the outcome of the election,” Biden responded.

“And it’s one thing — look, maybe I’m just being too much of an optimist,” he added. “Remember how we thought not that many people were going to show up to vote in the middle of a pandemic? We had the highest voter turnout in the history of the United States of America.

That sounded a lot like a yes, so another reporter pressed him on it later on. “I think it easily could be illegitimate,” the president said, circling back to 2020. “I mean, imagine if those attempts to say that the count was not legit — ‘You have to recount it, and we’re not going to count — we’re going to discard the following votes.’”

“I’m not going to say it’s going to be legit. It’s — the increase and the prospect of being illegitimate is in direct proportion to us not being able to get these reforms passed,” he added.

Psaki today: I talked to the Prez and he is not predicting that 2022 elections would be illegitimate

Biden yesterday: “I think it could easily be illegitimate” pic.twitter.com/5NngT2iQAT

The White House backtracked quickly, with press secretary Jen Psaki answering “yes” when asked whether Biden thought the 2022 elections would be legitimate, according to CBS News. However, some Democrats took this as license to go forth and say 2022 could easily be rigged if the voting rights legislation wasn’t passed.

According to a Saturday report by Alexander Bolton in The Hill, “Senate Democrats say they share President Biden’s concern that the results of the 2022 midterm elections may not be legitimate because of restrictive voting laws passed by GOP-controlled state legislatures and the empowerment of state-level officials allied with former President Trump.

“But the senators are torn over how hard to push a stolen-election narrative ahead of the November election in which Republicans are expected to make big gains in Congress.”

The stolen-election rhetoric is based around what Bolton described as “the state-level machinations of Trump allies” and election integrity laws, something Connecticut Democratic Sen. Chris Murphy thinks could cost Georgia Democratic Sen. Raphael Warnock his seat.

“I think many of these laws, especially those that end the bipartisan counting of votes, are intended to seat people who lost the election. If Herschel Walker wins in Georgia because all the Fulton County votes got thrown out, that’s not a legitimate election,” Murphy said. (Walker, a University of Georgia football legend endorsed by Trump, is the leading Republican candidate for the Georgia Senate seat.)

“It’s all circumstantial, but I think at some point you got to listen to what Donald Trump and his allies are saying. They don’t believe that Democrats can ever win legitimately, and they’re prepared to go to extraordinary measures to throw out a Democratic win,” Murphy continued. “I’m very worried the changes in these laws will ultimately result in a loser being declared a winner.”

“If officials were to disregard the vote count, a legitimate vote count, I can see the argument that the result would be illegitimate,” Blumenthal said. “Some of the most frightening aspects of some of the voter suppression laws are not only blocking access to the ballot box but then actually discounting the recording [of] the count of the vote.”

In addition to the two senators who were willing to go on record openly raising questions about the midterms’ legitimacy, Bolton found two who implied it. Warnock and Arizona Sen. Mark Kelly didn’t directly play into the stolen election narrative, although Warnock said “[o]ur democracy is in a 911 state of emergency” and Kelly griped about Arizona legislation that didn’t send voters mail-in ballots if they hadn’t voted in two consecutive elections, saying they were being “purged without giving any rationale.”

Meanwhile, he could only find one Democratic senator who would go on record absolutely disavowing the president’s “illegitimate” election narrative: “I would not have used those terms,” said Maryland Sen. Ben Cardin. “But I do think voting rights is very important in regards to the integrity of our election process, and it’s an urgent issue.”

Another seemed to hedge on the probability of the election being “stolen,” although he added Biden’s language was unhelpful — without directly calling the president out.

“I don’t want to start calling into question elections ahead of time, that’s not productive whatsoever. We saw that with the whole, ‘It’s all rigged,’ thing with President Trump,” he continued. “We need to see what actually plays out.

“What I worry about is when you have scenario like what happened in Michigan but the certification agent chooses to overrule the voters, that’s when you would move into a problematic area.”

The Michigan reference regards Biden’s win in the state being delayed because the Republican members of the Wayne County Board of Canvassers didn’t initially certify the results. What Heinrich leaves out is that this nightmare “scenario” couldn’t have changed anything because of state law — but it’s a scary what-if to throw in front of voters, so why not see if it sticks?

And keep in mind, all this talk is in addition to House Majority Whip Rep. James Clyburn of South Carolina, who came out in an appearance on CNN last week and said he was “absolutely concerned about” the election results being illegitimate if the voting bills weren’t passed.

Again, this was the kind of talk that was verboten as recently as Jan. 6. In his speech commemorating the occasion, Biden called it an “armed insurrection … looking to deny the will of the people” while the “former president who had just rallied the mob to attack [was] sitting in the private dining room off the Oval Office in the White House, watching it all on television and doing nothing for hours as police were assaulted.”

And what was the root cause of all of this? Trump had “done what no president in American history, the history of this country, has ever, ever done. He refused to accept the results of an election and the will of the American people.

“While some courageous men and women in the Republican party are standing against it, trying to uphold the principle of that party, too many others are transforming that party into something else. They seem no longer to want to be the party of Lincoln, Eisenhower, Reagan, the Bushes.”

The only thing missing from this fatuous unpaid political advertisement was the clip at the beginning saying, “I’m Joe Biden, and I approve this message.”

But never mind, because he didn’t really approve that message — at least when it comes to the 2022 midterms, where his party is set to be shellacked and his administration’s performance isn’t helping.

His party, sensing they’re on a sinking ship, is apparently more than willing to follow the president onto this rhetorical lifeboat.