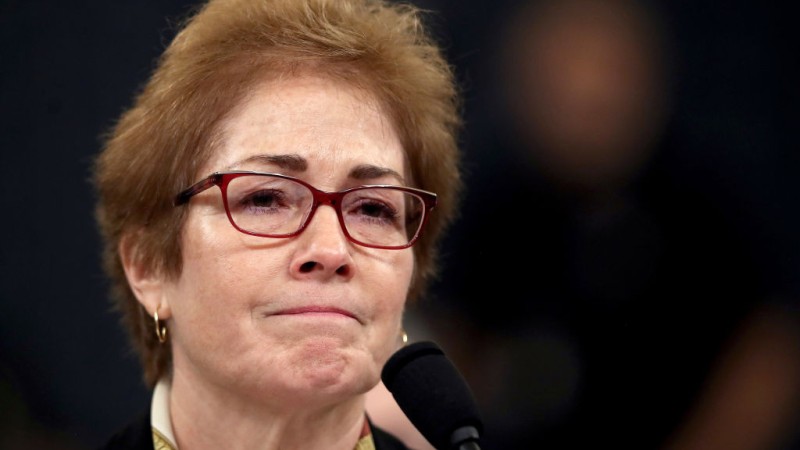 Marie Yovanovitch, the former US Ambassador to Ukraine, let slip during an interview that Trump would have prevented war in Ukraine via diplomacy, but then absurdly asserted that would have been a bad thing.

Yovanovitch, who testified against Trump during his 2019 impeachment trial, made the remarks during an interview with PBS this past weekend.

The former ambassador was asked by host Margaret Hoover about her previous claim that Russia’s invasion “never would have happened in the Trump administration.”

“I’ve heard that you have also suggested that Putin might not have gone to war if Trump was still in office,” said Hoover.

“Trump was very dismissive of NATO – I mean, dismissive, it’s obviously a diplomatic word – very critical of NATO, critical of our allies,” said Yovanovitch. “And his close associates, including John Bolton, have said that if he had won a second term, he would have pulled us out of NATO. I mean, why go to war with Vladimir Putin if the United States is going to present kind of the corpse of NATO on a silver platter? You don’t need to do that.”

Hoover then asked Yovanovitch directly, “I mean, how do you think the invasion would have been different if Trump had remained as president?”

Marie Yovanovitch — the former US Ambassador to Ukraine under Trump who testified against him in the 2019 impeachment, and was lauded as a hero — suggests that if Trump were in office, he’d have averted the war diplomatically. But she thinks this would’ve been a terrible thing pic.twitter.com/1Q4qp5cNOA

“I think that Trump would have provided Putin with enough of what he wanted that perhaps he wouldn’t have invaded,” she responded.

Yovanovitch was then asked what Ukraine would have looked like if Russia hadn’t invaded (thanks to Trump). She bumbled around before trying to cover her tracks.

“We are now getting into– You know, this is why diplomats are told [LAUGHS] never to answer theoretical questions! So we’re getting into areas of– you know, I mean, it’s a hypothetical question, right? I don’t know what Trump would have done, and I don’t know what Putin would have done. But I can’t see Trump, President Trump standing up for Ukraine the way President Biden is right now.

Apparently, “standing up for Ukraine” means continually feeding them weapons to prolong the war.

As we previously highlighted, prominent voices within NATO want to extend the conflict for as long as possible, something that will undoubtedly please the US deep state and transnational weapons contractors.