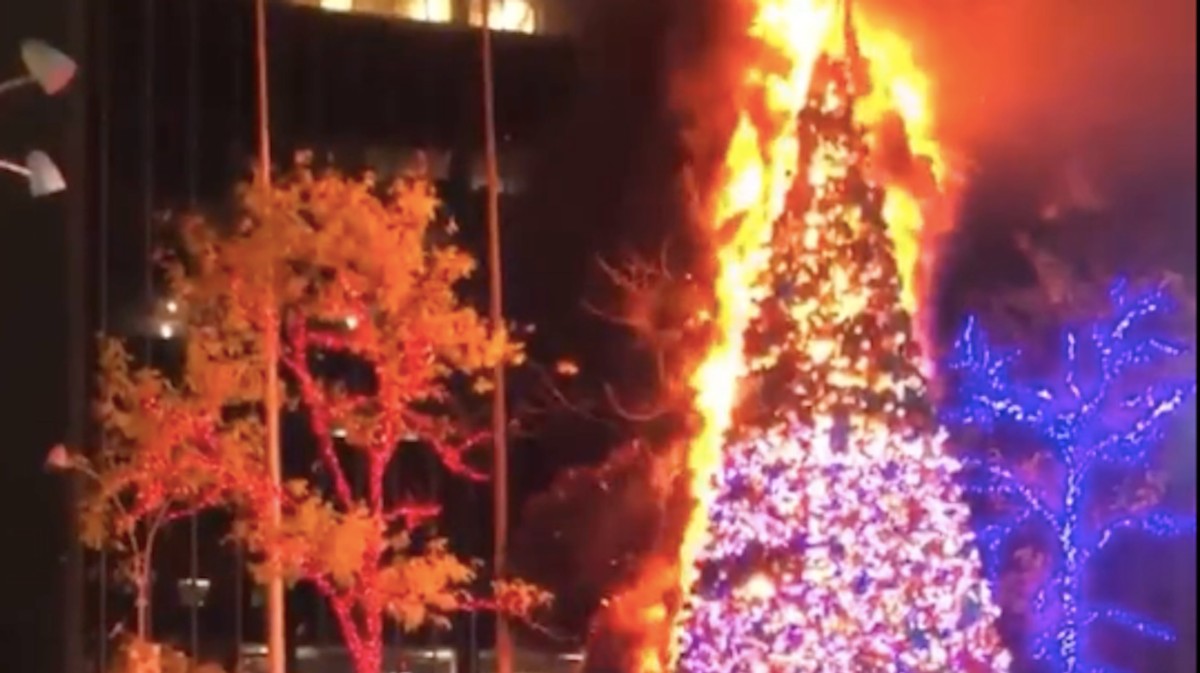 Fox News’ “All American” Christmas tree in midtown Manhattan was engulfed in flames early Wednesday morning, in what police suspect was an act of arson.

The tree—which was not actually a tree, but a 50-foot tall wire cone covered in greenery—was decorated in 100,000 red, white, and blue lights and 10,000 glass ornaments, took over 21 hours to assemble, according to Fox News. It caught fire shortly after midnight on Wednesday.

The suspect is charged with criminal mischief, reckless endangerment, arson, criminal nuisance, endangering others, criminal trespass, criminal tampering and disorderly conduct, according to the NYPD. Police Commissioner Dermot Shea told ABC7 that they are looking into mental illness as a factor in his actions.

The NYPD told me that the incident appears to be non-politically motivated at this time.

The NYPD told Motherboard in a statement that a Fox News Channel security guard saw a 49-year-old male climb the tree. When police arrived, they said, officers saw the man running from the scene, and arrested him. “The male suspect was removed to the MTN Precinct where he will be processed; there was a lighter removed from his person, but it’s unclear if there were any accelerant used,” according to the statement. “The cause of the fire is to be determined by NYC Fire Marshall, there are no injuries reported and the investigation is ongoing.”

In videos on the surveillance app Citizen, police can be seen arresting the man as the tree burns in the background.

“The motive I don’t think is clear at this point,” Shea said. “It’s an individual that is known to us. He has a series of low level arrests and drug arrests. He was issued earlier this year some appearance tickets and didn’t come back to court, which unfortunately is something we see all too often. Also has some low level arrests out of state.”

According to Justin Baragona, a reporter at the Daily Beast, Fox News CEO Suzanne Scott sent an internal memo to staff, calling it a “malicious arson attack” and a “deliberate and brazen act of cowardice,” adding that the company plans to install a new tree and hold a new lighting.