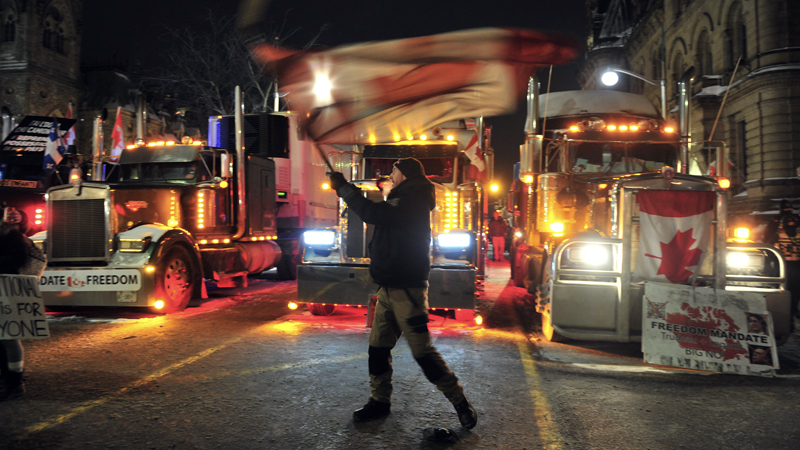 Shocking video out of Canada shows a driver in a white SUV plowing through a crowd of Freedom Convoy supporters on Friday night, resulting in several hospitalizations.

Video taken in Winnipeg, Manitoba now circulating social media shows the SUV running over several Freedom Convoy supporters before speeding off as others chase after it.

VILE: A freedom protester was mowed down by an SUV late last night. Suspect has been arrested. Trudeau vilified these peaceful protests, and now this happens. Shocking. pic.twitter.com/G08LWmExV6

Someone on the scene also managed to capture a photo of the attack.

@JustinTrudeau are you OK with this? A direct result of the prime ministers blacklisting an identifiable group of people. The “fringe minority” that’s rising up all over Canada.
Mr. Prime Minister you have to answer for this one as it’s your influence that caused this to happen pic.twitter.com/9nDVKLCIDT

The Winnipeg Police Constable Rob Carver announced in a press conference Saturday that the hit-and-run suspect was arrested and the four victims currently being treated had suffered non-life threatening injuries.

“What I can tell you here is that comments were made by the accused that tends to suggest that this was not specifically about the [COVID] mandates,” Carver said when asked about a possible motivation.

“Whether or not we can sort of rely on those comments is another question,” he added.

Though he said he was unsure of the vehicle’s precise speed, Carver noted “it was moving at a fairly decent clip, and it’s pretty miraculous no one sustained any serious injuries.”

The Manitoba Post reported the suspect was a “42 year old man” who was “arrested after a struggle” with police.

“Trudeau called for Canadians to marginalize the unvaccinated,” Levant said. “He said they should not be tolerated. He said they were racist, misogynist, violent. Someone heard that, believed it, and was radicalized. And committed this act of terrorist violence.”

Trudeau called for Canadians to marginalize the unvaccinated. He said they should not be tolerated. He said they were racist, misogynist, violent. Someone heard that, believed it, and was radicalized. And committed this act of terrorist violence. pic.twitter.com/0FTxIMWsy7

This comes as Freedom Convoy protests spread from Ottawa to Toronto, Victoria, and other cities in Canada, with no signs of slowing.

In fact, after GoFundMe revoked the Freedom Convoy’s $10 million on Friday, donations for the convoy surged to $1.1 million on alternative fundraising platform GiveSendGo in just 12 hours.

Trudeau, along with the media, have been trying to portray the Freedom Convoy as violent racists since the peaceful uprising began last week, so of course when a real act of violence happens AGAINST the protesters, they’re nowhere to be found.

And if push comes to shove, they’ll just blame the SUV for the violence instead like they did with the Waukesha parade massacre last December.