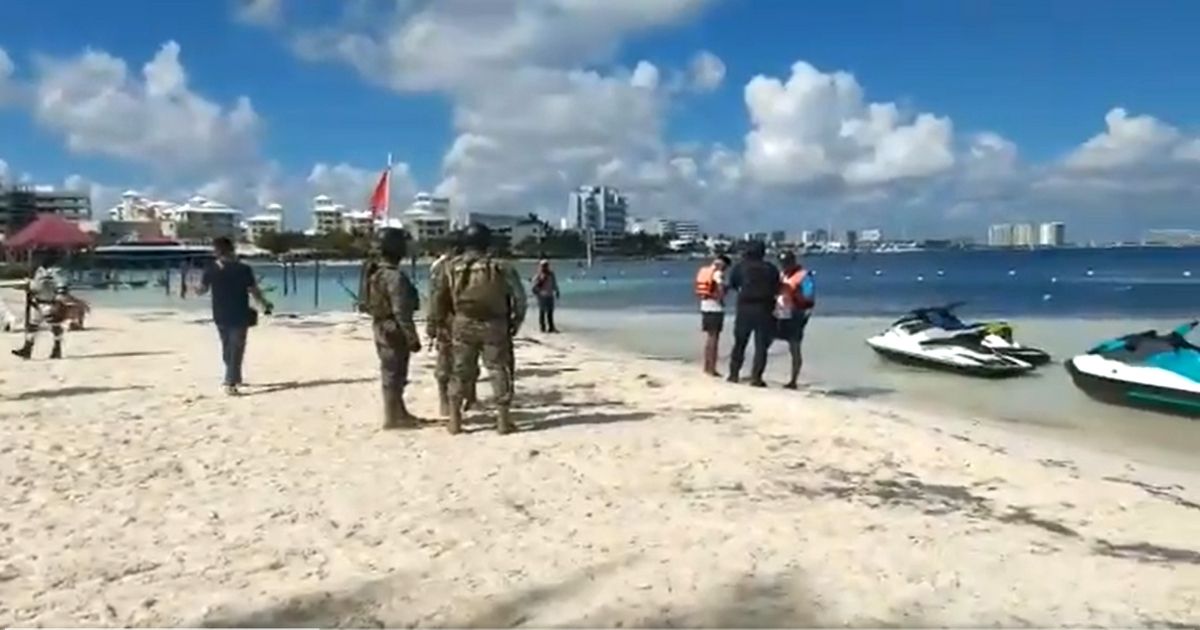 A shooting on a beach in Mexico might have tourists rethinking their vacation plans.

Multiple attackers rolled up to Playa Langosta in Cancun’s hotel zone on jet skis and began opening fire on Tuesday, according to The Associated Press.

Nobody was injured, but tourists were rattled by the incident.

Zayne Jones of Utah said his wife and kids were at the hotel’s pool on the beach at the time.

“I ran to the balcony to tell them to get down and get to a corridor and get cover,” Jones told KUTV-TV in Salt Lake City.

Horrifying: The Special Outfit Epstein Wanted Teen Girl to Wear as She Serviced Him – Testimony

“There was panic at the resort, people running and yelling.”

“I ran to the balcony to tell them to get down “

There was another shooting involving gunmen on jet skis in the tourist zone of Cancun. A Utah father was in his room while his wife and kids were on the beach. They told me their story tonight for @KUTV2News at 10 https://t.co/OVSVWnmmH0

“Luckily nobody got hurt, but it could have gone a different way,” Jones added. “Just not a good feeling having your kids out here.”

Kerry Arms, who was visiting from Minnesota, told the AP, “There was a delayed reaction for about maybe five seconds, then everybody started scrambling and screaming and crying, and running.”

Another tourist, Rick Lebassa from Maine, said, “There were two guys and maybe even a third, who came in on jet skis, and what I saw was them shooting up into the sky.”

Unfortunately, Mexican authorities were unable to catch the suspects. However, they were able to seize the jet skis.

The shooting goes along with an increase of violence in the resort town as cartels continue to battle with each other.

Newsom Extends COVID-19 Emergency in CA, Then Jets Off to Mexico for Thanksgiving

In response to an increase in violence, Mexican authorities have dispatched thousand of National Guard soldiers to the area of Cancun. The Utah family says soldiers were on scene within minutes. Really wild story, hope you’ll tune in. pic.twitter.com/oxfL6Hj845

On Nov. 5, two drug dealers were killed by a swarm of rival cartel members just feet away from the high-end Azul Beach Resort, NPR reported.

Would you plan a trip to Cancun?

As a result of the heightened tensions, the Mexican National Guard has been deployed to the area, making for a less-than-relaxing environment for tourists looking to unwind.

The U.S. State Department is advising that American travelers “exercise increased caution” in the region “due to crime.”

One more shooting in Cancun’s tourist area despite recent deployment of Mexico’s militarized National Guard & following other incidents since October. Locals have been the most affected by the criminal wave of recent years in the Mayan Riviera but only now it gains attention. https://t.co/68etGxvljs

Organized drug crime in Mexico is common, except it is now beginning to seep into areas that were once presumed to be safer than the rest of the country.

Those looking for a beach vacation are probably better off looking elsewhere for the time being.

However, it’s likely that corruption throughout the public and private sectors in Mexico will only perpetuate the crisis.