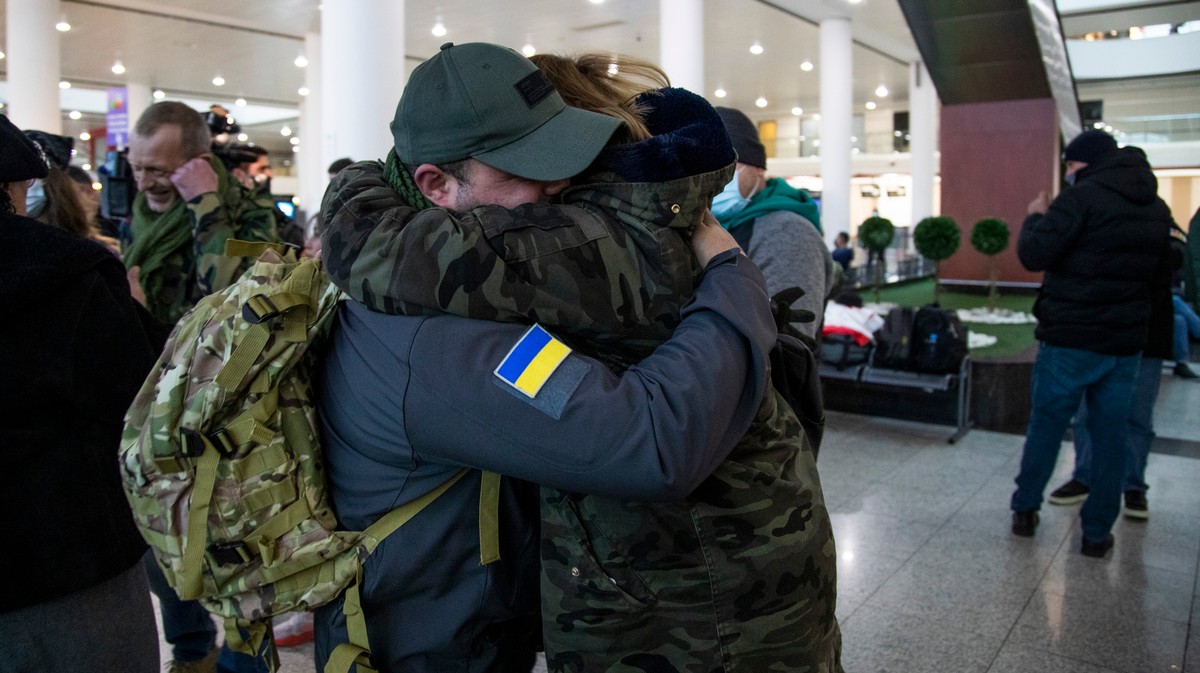 The commander of a Georgian-led contingent of foreign fighters in Ukraine has condemned the government in Tbilisi as “slaves of Putin” after it blocked a charter flight transporting foreign volunteers to Ukraine.

Hundreds of Georgians with military backgrounds gathered in the capital, Tbilisi, on Monday night to board a flight chartered by the Ukrainian government to fly them to the war against Russia. The flight was organised after Ukrainian President Volodymyr Zelenskyy appealed on Sunday for people around the world to join a new international brigade fighting to defend his country.

But the Georgian government, seemingly wary of angering the superpower with which it fought a brutal war in 2008, blocked the flight from landing in Tbilisi.

The decision drew an angry response from Ukraine, which recalled its ambassador to Georgia on Tuesday over the move, and what Zelenskyy called the Georgian government’s “immoral position” on the Russian invasion.

“Brave Georgian brothers are waiting at the airport to fly,” he tweeted, urging Garibashvili to “show his courage.”

The contingent of would-be fighters had been destined to join the Georgian National Legion, a volunteer unit formed by mostly Georgian soldiers that’s played a key role in drawing foreign combatants to join Ukraine’s fight since it was formed in 2014.

The unit’s leader, Mamuka Mamulashvili, railed against the Georgian government’s move during a phone call with VICE World News on Tuesday.

“He is a traitor of my country and he doesn’t represent the will of Georgian people,” he said of the Georgian prime minister. “They’re slaves of Putin.”

He said his unit had been counting on the arrival of the 400 Georgian fighters, constituting one of the biggest national contingents to volunteer since Zelenskyy’s appeal.

Mamulashvili said the Georgian contingent would still make it to the battlefield, travelling for days instead via bus across Turkey and up through the Balkans into Ukraine.

“They will be three days late, but they will arrive whatever happens,” he said. “I hope they’re not gonna be late, because we’re going to have an intensive fight within a couple of hours, and we need more guys to be standing with us.”

Georgia’s move to block the foreign fighters has added to public anger over its response to the Russian invasion, according to reports. A protest is planned for Tbilisi tonight, the second in recent days

On Tuesday, Irakli Kobakhidze, the chair of the ruling Georgian Dream party, said that allowing Georgian fighters to travel to the battlefield would be tantamount to joining in the war, Open Caucasus Media reported.

In recent years, the Georgian National Legion has functioned as a waypoint for foreign volunteers from 27 countries to join the conflict, providing them accommodation, food and training on their base while they go through the process of being formally attached to the Ukrainian armed forces.

The unit is now playing a similar role in dealing with the wave of international interest generated by Zelenskyy’s appeal, and the outpouring of solidarity for Ukraine triggered by the Russian invasion. Hanna Maliar, Ukraine’s deputy minister of defence, said on Monday that her ministry had received “thousands” of requests from prospective international volunteers.

In one group chat on Signal seen by VICE World News, about 200 would-be volunteers from around the world were discussing their plans to imminently join the battle.

Mamulashvili said his unit was expecting a group of fighters from UK and Europe to join them from Poland imminently.

“They will be soon crossing the border and joining us,” he said.