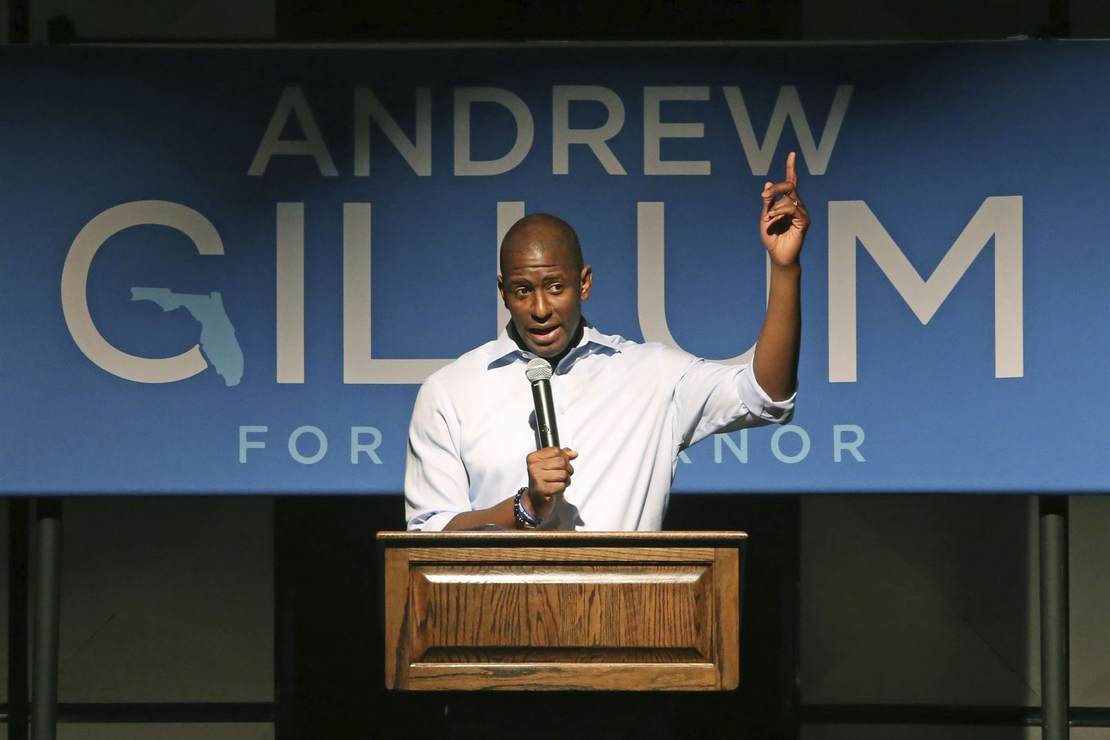 Remember Andrew Gillum? As Democrats’ gubernatorial nominee in the 2018 Florida election, he barely lost to Ron DeSantis despite predictions of victory. Gillum conceded, unconceded, and then finally conceded during a recount, and then hinted at a run for the Democratic presidential nomination.

That was before Gillum got caught up in a crystal-meth overdose scandal, but after he had already been fingered for a federal fraud probe. Well, the shoe finally dropped on that scandal this morning, as Gillum surrendered to the feds as they indicted him for 21 counts of illegal activity connected to his campaign:

Andrew Gillum, the once-rising Florida Democratic star who narrowly lost his 2018 gubernatorial race against Ron DeSantis, has told associates that he expects to be indicted in federal court as early as today for alleged fraud tied to his campaign, NBC News has learned.

The exact charges are unclear and the U.S. Attorney’s Office for the Northern District of Florida would neither confirm nor deny details about the criminal case against Gillum. In a written statement to NBC News, Gillum acknowledged the case but said it is politically motivated without offering specifics. …

Two sources with whom Gillum spoke Tuesday told NBC News that he began phoning friends frantically about the criminal case. Neither would speak on the record because they weren’t authorized to speak on his behalf. They said he is scheduled to meet with prosecutors at 10 a.m. and that his indictment could be unsealed at 1 p.m. ET.

That source said Gillum was called Tuesday morning and informed he was going to be criminally charged for campaign finance-related charges.

A federal grand jury has returned a twenty-one count indictment against Andrew Demetric Gillum, 42, and Sharon Janet Lettman-Hicks, 53, both of Tallahassee, Florida. The indictment was announced by Jason R. Coody, United States Attorney for the Northern District of Florida.

The Indictment alleges that between 2016 and 2019, defendants Gillum and Lettman-Hicks conspired to commit wire fraud, by unlawfully soliciting and obtaining funds from various entities and individuals through false and fraudulent promises and representations that the funds would be used for a legitimate purpose. The Indictment further alleges the defendants used third parties to divert a portion of those funds to a company owned by Lettman-Hicks, who then fraudulently provided the funds, disguised as payroll payments, to Gillum for his personal use. Both defendants are charged with 19 counts of wire fraud. Gillum is also charged with making false statements to agents of the Federal Bureau of Investigation.

Gillum could face twenty years for the wire fraud charges and five for lying to investigators. Presumably, though, he’d be looking at a smaller sentence as a first-time offender, but that would still put him behind bars for a significant time.

Bear in mind that the existence of the federal probe into Gillum had been well known when Democrats ran him as a candidate for governor. That had come out as early as February 2018 when an FBI affidavit inadvertently got posted publicly in a case involving corruption in Tallahassee’s city government, where Gillum served as mayor. Even before that, the Tallahassee Democrat newspaper had exposed suspicious transactions involving Gillum:

The FBI may have tried to entice Mayor Andrew Gillum through one of his close friends to see a Broadway show, catch a Mets game and stay at a hotel in New York City as part of its investigation into alleged public corruption in Tallahassee.

Gillum, who had room reservations elsewhere, won’t say if he stayed at or visited the Millennium Hotel in downtown Manhattan, where an FBI agent posing as a developer had arranged rooms for him and others. He also won’t say if he attended the Broadway blockbuster “Hamilton” or went to the baseball game.

Gillum’s responses to the Tallahassee Democrat on the trip have evolved over the past week. Acting on information from sources close to the investigation, the Democrat asked Gillum on Aug. 19 about the “Hamilton” show and Mets game and specifically who paid for the tickets.

“I have no knowledge of any of that,” Gillum replied.

Gillum since has refused to give a yes or no answer on whether he took part in any of the outings, claiming that his time spent with undercover FBI agents was “personal.”

Gillum’s political career was over by the time of the crystal-meth overdose scandal, of course. This indictment won’t stop a comeback effort. However, it’s liable to raise some questions about why Florida Democrats didn’t stop Gillum from advancing to the general election in 2018, especially to the extent that these fraudulent activities allegedly took place in that gubernatorial campaign. It certainly won’t do anything for the party’s credibility in 2022. And it certainly won’t hurt DeSantis in this cycle either, which makes his 2024 bid all the more likely.