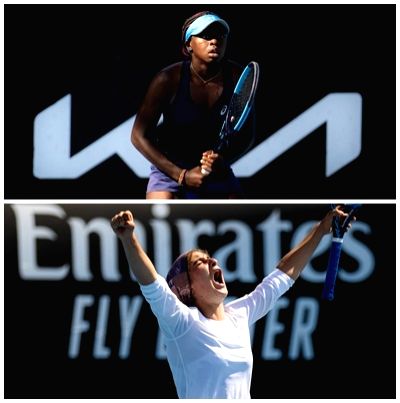 Meshkatolzahra Safi on Monday became the first girl from Iran to win a Grand Slam Juniors match, while Angella Okutoyi of Kenya did the same for her country in the same junior girls’ singles section.

Safi, playing with a traditional headscarf and body-covering suit, defeated qualifier Anja Nayar of Australia 6-4, 6-3 in a girls’ singles first-round match at 1573 Arena.

Safi broke Anja’s service in the 10th game when the latter hit a backhand wide to win the first set. The Iranian girl then fought off a late challenge from Anja and won the second set 6-3 by saving a break-point in the 9th game.

The players had traded serves in the first four games of the second set before Safi held her serve to go 3-2 up. She won the next two games to go 5-2 up before Anja came back to make it 5-3. She then put Safi under pressure but the Iranian player could not be thwarted and emerged a deserved winner.

Angella Okutoyi became the first girl from Kenya to win a match at the Grand Slam when she defeated another qualifier Federica Urgesi of Italy in three sets, winning 6-4, 6-7(5), 6-4.

Angella claimed a crucial break in the fifth game with her forcing shot but Federica came back to take the second set in a tiebreaker after saving a set-point in the 10th game.

However, the Kenyan girl could not be denied on Monday as she came back strongly, earned a crucial break in the 8th game off an unforced error and went on to win the set 6-4 to win the match in 2 hours and 13 minutes.