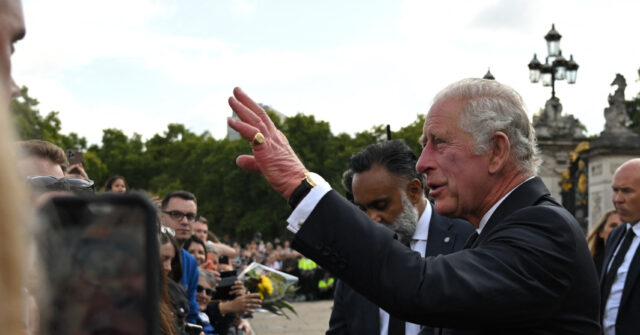 King Charles III has arrived at Buckingham Palace, London, personally greeting dozens of well-wishers who welcomed him with shouts of “God save the King!”

The 73-year-old monarch, known to generations of Britons as the Prince of Wales for so long, greeted the crowds warmly, shaking hands and at one point even accepting a kiss on the cheek from mourners who had come to pay their respects to the new sovereign and his late mother, Queen Elizabeth II.

Kiss for a King.

One woman appeared to ask him if it was ok to kiss him.

When His Majesty said yes, she planted one on his cheek.

The King was joined by the Queen Consort, Camilla, formerly the Duchess of Cornwall, in meeting the crowds, with the royal pair taking over ten minutes to try and personally interact with as many members of the public as possible before making a brief tour of the many floral tributes left for his predecessor.

Many clutched smartphones in their hands, though the King’s bodyguard chided them to put the devices down and “enjoy the moment”.

LONDON, ENGLAND – SEPTEMBER 09: King Charles III and Camilla, Queen Consort view floral tributes to the late Queen Elizabeth II outside Buckingham Palace on September 09, 2022 in London, United Kingdom. Elizabeth Alexandra Mary Windsor was born in Bruton Street, Mayfair, London on 21 April 1926. She married Prince Philip in 1947 and acceded the throne of the United Kingdom and Commonwealth on 6 February 1952 after the death of her father, King George VI. Queen Elizabeth II died at Balmoral Castle in Scotland on September 8, 2022, and is succeeded by her eldest son, King Charles III. (Photo by Samir Hussein/WireImage)

In the coming hours, King Charles is expected to hold an audience with Prime Minister Liz Truss, who became the fifteenth person invited to form a government by the late Queen, who worked right to the end, just days ago.

He will also record an address to the nation and the wider Commonwealth, which, as of the time of publication, is expected to be broadcast around 6 p.m.