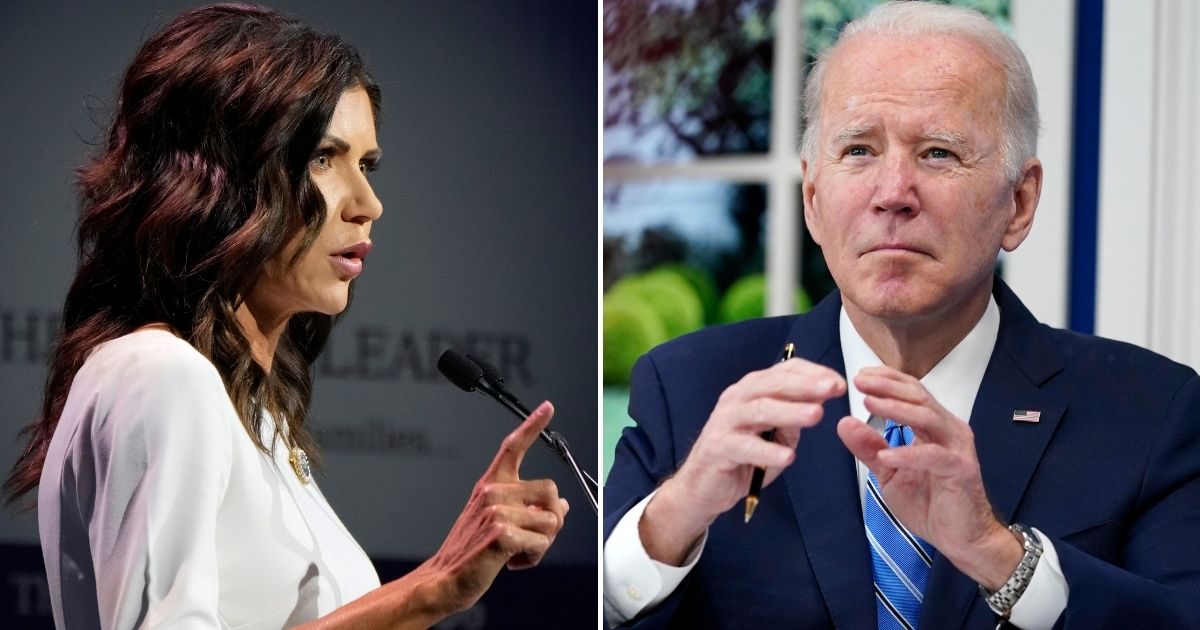 President Joe Biden accidentally conceded earlier this week that the federal government has royally messed up their coronavirus strategy, and now one governor wants him to reverse his actions.

“Look, there is no federal solution. This gets solved at a state level,” Biden told governors on a call Monday, The New York Post reported.

Biden promised on the campaign trail that he would put an end to the pandemic, but the delta and omicron variants made that a pipe dream.

I’m not going to shut down the country.

I’m not going to shut down the economy.

I’m going to shut down the virus.

Except the president is only now admitting the fact that states play a more important role in handling the public health crisis, which caught the attention of Republican South Dakota Gov. Kristi Noem.

“After a year, we finally agree @potus,” Noem tweeted Tuesday. “The federal government isn’t the solution. That’s why from the start, SD took a different approach by trusting our citizens to be responsible and make the right decisions for themselves & their families. Now rescind all the federal mandates.”

After a year, we finally agree @potus. The federal government isn’t the solution. That’s why from the start, SD took a different approach by trusting our citizens to be responsible and make the right decisions for themselves & their families. Now rescind all the federal mandates.

She later suggested in a “Fox & Friends” interview on Wednesday that her state would pursue legal action against the White House if they refuse to back down.

“When you have a leader overstep their authority, especially in a time of crisis, that that’s when you break this country,” she said.

President Biden says that there “is no federal solution” to the virus, but he continues to impose unconstitutional mandates on the country.

He should rescind those mandates immediately. But even if he doesn’t, we’ll win in court. pic.twitter.com/odUbIm9Vm2

While there are plenty of federal mandates to go around, the most controversial one yet is the Occupational Safety and Health Administration rule that directs all companies with over 100 employees to require vaccinations or weekly testing.

The Supreme Court will be holding a hearing about the OSHA mandate next month, as its constitutionality is hotly debated, according to The New York Times.

Don’t Count on Manchin – As Soon as He Nuked Dems’ Plan, He Offered to Nuke Conservatives, Too

Other federal mandates, such as the requirement to wear a facial covering while at “transportation hubs” like airports, are also the center of controversy.

Noem is making the point that the Biden administration has intruded in the lives of everyday Americans in the name of public health and has trampled states’ rights in the process.

Each state has a unique process to tackling the virus based on its political leanings and population overall, so Biden’s attempts to nationalize the pandemic have often been short-sighted.

Should federal COVID-19 mandates be rescinded?

The only area that was moderately successful was vaccine distribution, but that was done with the help of private corporations and the previous White House.

Even when it comes to providing ample testing — an area in which it would make sense for the federal government to play a role — Biden failed miserably.

Slow wait times are still a concern for people needing their results, and Vanity Fair released a bombshell report last week that the administration turned down an October plan which would have greatly expanded rapid testing for the winter.

Whether it’s conservative South Dakota or socialist California, states have played a much larger role in the pandemic response, and Biden’s mandates have done little to improve the situation.