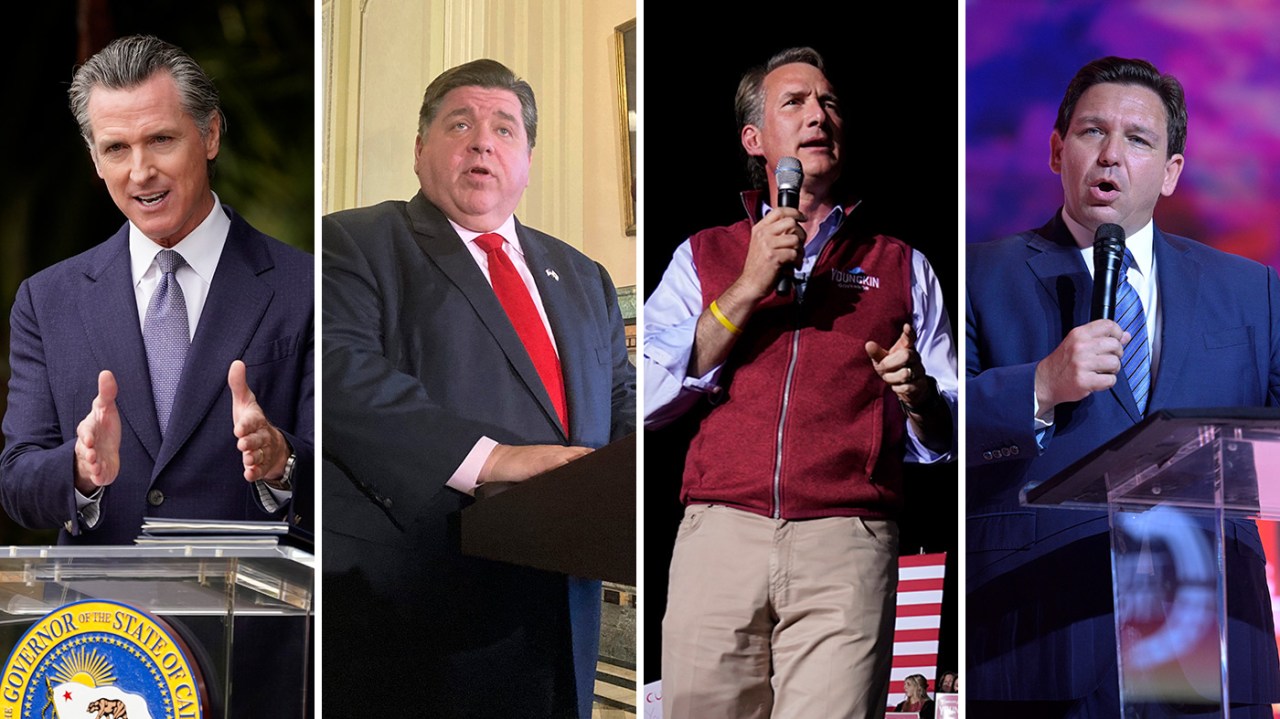 Governors are increasingly being eyed as potential 2024 contenders as Democratic and Republican voters sour on their respective parties’ standard-bearers.

On the Democratic side, California Gov. Gavin Newsom and Illinois Gov. J.B. Pritzker have made recent appearances outside their home states that have drawn the national spotlight. Newsom also raised eyebrows by releasing ads attacking some of his Republican counterparts.

Meanwhile, on the GOP side, Virginia Gov. Glenn Youngkin has also fueled White House chatter over the past several weeks, putting him alongside Florida Gov. Ron DeSantis as a potential successor to former President Trump.

The new focus on governors comes as polls show voters are frustrated with the direction of both parties. Significant numbers of Democrats and Republicans want someone other than President Biden or Trump to be their nominee in 2024.

A New York Times-Siena College poll also released earlier this month found that 64 percent of Democratic respondents said they would prefer a different candidate over Biden in 2024, while 47 percent of Republican primary voters named a different candidate or said “someone else” when asked who they would vote for if the GOP presidential primary were held today. Forty-nine percent named Trump.

The low poll numbers for Biden and Trump have seemingly opened the door for governors to step into the spotlight.

“In states where there are popular governors, it makes sense that people would at least think about, maybe somebody else can do a better job,” Hemond said.

“We had a long period where governors were the main presidential candidates,” said Julian Zelizer, a professor of history and public affairs at Princeton University.

“Not a lot has been happening in Washington on some big issues,” he said. “A lot of the action has moved to the states,” he continued, referring to handling of the coronavirus pandemic, gun control and reproductive rights. “The battles are played out in the states now.”

The pandemic has been perhaps one of the biggest battles. In 2020, governors were given a leading role in the fight against the spread of the virus — and it was their response that proved key to determining their popularity.

Former New York Gov. Andrew Cuomo (D) initially received praise for his daily televised coronavirus briefings. But he was forced to resign last year amid sexual misconduct claims and his handling of the state’s nursing homes during the pandemic.

On the west coast, Newsom took a strict approach, with much of California seeing pandemic restrictions in 2020 through 2021. The failed effort to recall Newsom last year was fueled, in part, by opposition to the state’s coronavirus restrictions.

Meanwhile in Florida, DeSantis notably took a more laid-back approach to the pandemic, leaving localities, for the most part, to decide how they wanted to handle it. The governor’s supporters say his relaxed restrictions ultimately saved and boosted the Sunshine State’s economy, though Democrats have largely criticized his approach.

Republicans argue that it was the pandemic restrictions that led to the red wave seen in Virginia’s gubernatorial election last year, which propelled Youngkin, a businessman with no prior political experience, into the governor’s mansion.

“He was the first Republican to run for governor after the pandemic,” said Kristin Davison, a political adviser to Youngkin. “I remember when the campaign launched where Virginia was – schools were closed, living rooms were classrooms and last January the big rallying cry was ‘Get our kids back in school five days a week.’ ”

While Youngkin campaigned on resuming in-person schooling, he also zeroed in on a number of cultural issues.

“Not only was he able to run on and promote policies to overcome the pandemic, but also fix the problems that we had because of it,” Davison said. “Gov. Youngkin is really one of the first Republicans to run on education and win.”

Youngkin specifically focused on the issue of not allowing critical race theory and certain material dealing with gender and sexuality to be taught in classrooms. Other potential 2024 contenders, including DeSantis and South Dakota Gov. Kristi Noem (R), have also put an emphasis on cultural issues pertaining to education. In April, Noem signed an executive order restricting the teaching of critical race theory in South Dakota. Earlier this month, DeSantis signed the Parental Rights in Education bill, known to its critics as the “Don’t Say Gay” bill, into law. The legislation restricts instruction related to sexual orientation or gender identity in primary schools.

But it’s not only Republicans going on the offensive. Newsom made headlines this month when he ran ads attacking DeSantis and Texas Gov. Greg Abbott (R) in their own states.

Pritzker, who is up for reelection later this year, has been testing his own political strength in Illinois. He has made headlines for backing a challenger to lead Illinois’s Democratic Party, putting him directly at odds with other Democrats in the state.

Michigan Gov. Gretchen Whitmer (D), also up for reelection, has also made national news, positioning herself as the last line of defense against the anti-abortion movement in her state. Months before the Supreme Court overturned Roe v. Wade, Whitmer announced she was requesting that the state’s Supreme Court make a decision on the constitutionality of abortion.

In theory, some Republicans and Democrats agree that governors could ultimately make better presidents because of the executive experience that comes with the job.

“They’re both executive roles,” Davison said. “Governors really have the ability to impact people’s lives so directly on a daily basis.”

But whether they can defeat Biden and Trump, should the pair once more run for the White House, remains to be seen.