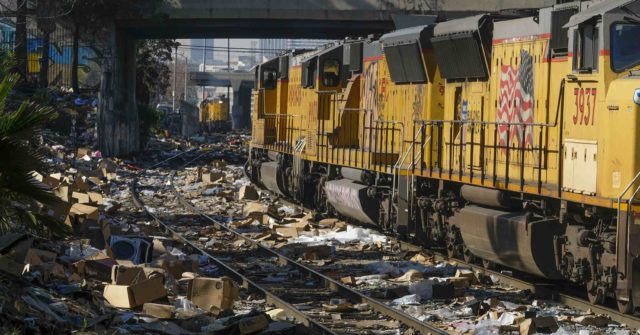 The Los Angeles Times quoted Moore saying, “People were … breaking into these containers and stealing firearms, tens of firearms…That gave us the great concern as a source again of further violence in the city as people were capitalizing on the transport of these containers with having little or no policing or security services there.”

LAPD Deputy Chief Al Labrada said the department has recovered “numerous guns” which were said to have been stolen from freight trains.

The Times notes that “Union Pacific runs about 275 miles of tracks in Los Angeles County, where since December 2020 an average of 90 containers a day have been burglarized.”

A member of the media picks up a shredded box at a section of the Union Pacific train tracks in downtown Los Angeles, Friday, Jan. 14, 2022. Thieves have been raiding cargo containers aboard trains nearing downtown Los Angeles for months, leaving the tracks blanketed with discarded packages. (AP Photo/Ringo H.W. Chiu)

The Associated Press observes that photos of discarded boxes and trash around downtown LA’s Union Pacific tracks have been widespread. Much of the trash is comprised of the boxes thieves opened and emptied as they targeted the freight cars.