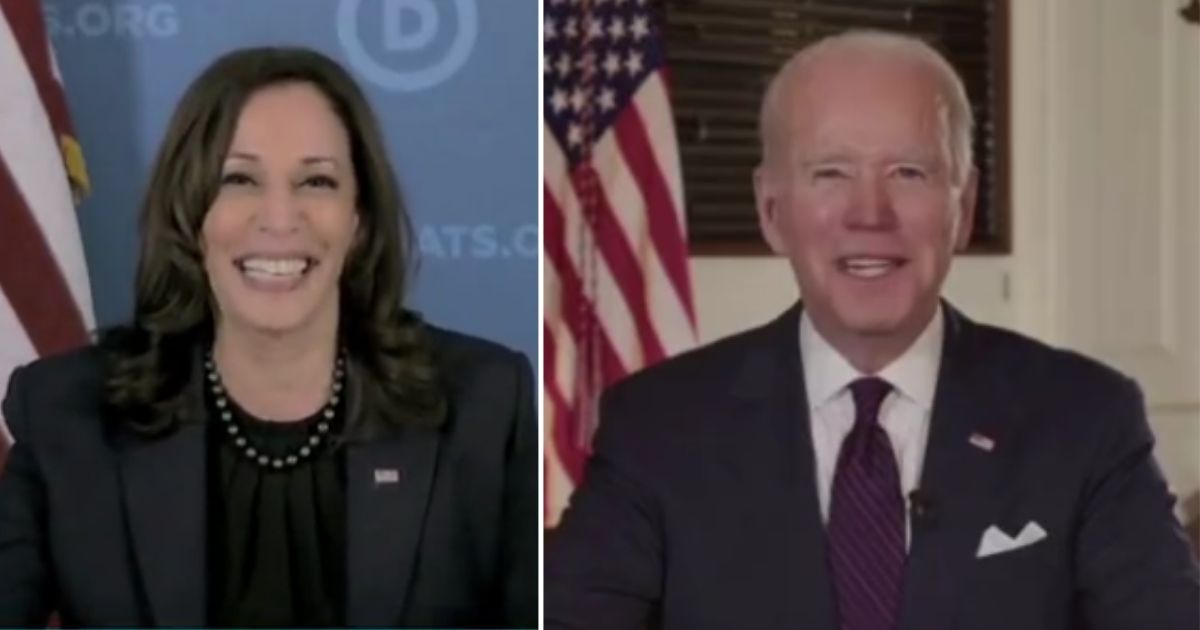 President Joe Biden piled on the praise for Vice President Kamala Harris during a Democratic National Committee event celebrating the one-year anniversary of their inauguration and went so far overboard that Harris could only respond with one of her signature awkward grins.

“Kamala, I love you,” Biden glowingly told his vice president during his opening remarks on Thursday, Fox News reported. “You always have my back. You’re really amazing. You’re the best partner I could imagine.”

Harris, who has earned quite a reputation for cackling loudly when faced with tough questions from reporters, mustered little more than a painted-on grin.

“I do,” she replied simply.

Well, he might be president of the United States now, but Biden has by no means outgrown the unflattering “Creepy Joe” moniker since assuming office.

Biden has long been known for his highly familiar manner, which is praised by fans as warm and kind and slammed by critics as inappropriate and even perverted. Or, if you ask his former staffer Tara Reade, downright criminal.

So Harris likely knew what she was bargaining for when she agreed to be his running mate — heck, she said on the record that she believed Reade, who accused Biden of flat-out sexual assault, and still signed on to be his veep, so there’s no telling where she draws the line when it comes to inappropriate behavior.

All that said, the awkwardness of her response to Biden’s “I love you” is highlighted by the fact that rumors have been swirling for months of growing tensions between the White House and the vice president’s office as both Biden and Harris stare down humiliatingly low approval ratings.

Biden wasn’t so warm in December at the funeral of former Sen. Bob Dole when he was caught on camera appearing to ask Jill Biden to switch seats with him so he wouldn’t have to sit next to Harris.

🚨 AWKWARD, SHADE WAR:
Joe Biden Refuses to acknowledge Kamala as he walks right past her in US Capitol. Then Joe asks Jill to SWITCH SEATS so he won’t be close to VP. Neither make eye contact as Joe looks AT THE CEILING and Kamala looks at the floor.

CRINGE. See for yourself: pic.twitter.com/urCVJOq8Qa

This interaction came on the heels of a scathing CNN report detailing an alleged feud between the White House and Harris’ office.

While the White House was reportedly growing frustrated with the “entrenched dysfunction and lack of focus” in the vice presidential office, Harris’ supporters were annoyed that she was “not being adequately prepared or positioned” by the White House.

At this point, of course, Harris had already made history — by garnering the lowest approval rating for a vice president ever.

Biden has also been breaking records. This month it was reported that he’d seen the biggest approval ratings drop for any president since World War II as the number of Americans who are displeased with his job performance jumped to 54 percent.

The New York Post reported that Biden emphasized party unity during Thursday’s DNC event in light of the terrific failure Democrats experienced in the Senate this week as their “voting rights” bill was blocked by Republicans with the help of Democratic Sens. Joe Manchin and Kyrsten Sinema, who have staunchly refused to play ball with their radical anti-filibuster colleagues.

So it was hard not to sense the desperation that oozed from his gooey greeting to Harris as he geared up to put on a united front, both within the party and his own administration.

From the looks of it, not well.