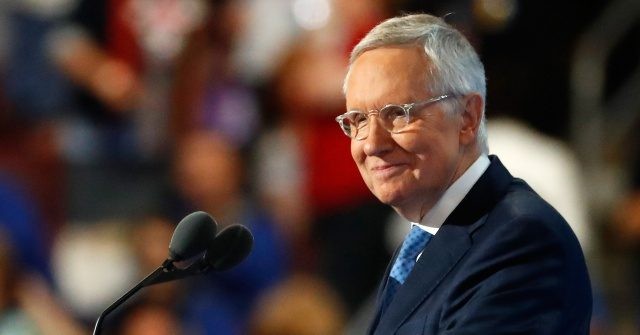 Former Sen. Harry Reid (D-NV), who died at 82-years-old last month, dropped his support for restricting overall immigration to the United States for political reasons, the New York Times reports, not because of a lack of evidence showing high levels of immigration hurt working- and middle-class Americans.

As Breitbart News detailed, throughout the 1980s and 1990s, Reid railed against high levels of legal immigration, birthright citizenship, illegal immigration, amnesty for illegal aliens, and the nation’s inability to assimilate such large volumes of foreign nationals.

In one speech, while sponsoring legislation to end birthright citizenship, Reid said:

We now admit the equivalent of a major city each year without having the vaguest idea of how we will educate all the new children, care for the sick, provide housing and jobs, build infrastructure, and attend any of the needs of newcomers for those already here. Each year, we admit more people each year than what makes up some of our states. We admit a new state with legal immigrants every year … we have no idea who or how these huge costs will be borne. [Emphasis added]

In 2007, a year before former President Barack Obama was elected, Reid played a vital role in squashing former President George W. Bush’s amnesty legislation — adding to his decades-long resume as a populist politician that fought the excesses of immigration at the expense of working- and middle-class Americans.

In a piece about Reid’s passing and his political power within the Democrat Party, the Times admits that the former Senate Majority Leader’s position on immigration changed solely for political purposes:

Mr. Reid took decidedly conservative stances early in his career, notably opposing abortion and looser immigration laws. But his positions shifted as the demographics of his state changed, and he eventually became a champion of undocumented immigrants and a supporter of abortion access. Mr. Obama said that after Mr. Reid introduced legislation to repeal birthright citizenship, Mr. Reid’s wife, Landra, swayed him on immigration by reminding him that her father had been a Russian immigrant. [Emphasis added]

Mr. Obama added: “Later, Harry would say, ‘I came to the realization that I was way off base. I’m so glad she righted the ship.’” [Emphasis added]

Extensive research by economists like George Borjas and analyst Steven Camarota reveals that the country’s current mass legal immigration system burdens U.S. taxpayers and America’s working and middle class while redistributing about $500 billion in wealth every year to major employers and newly arrived immigrants. Similarly, research has revealed how Americans’ wages are crushed by the nation’s high legal immigration levels.

For every one-percent increase in the immigrant portion of American workers’ occupations, their weekly wages are cut by about 0.5 percent, Camarota finds. This means the average native-born American worker today has his weekly wages reduced by perhaps 8.75 percent since 17.5 percent of the workforce is foreign-born.

Likewise, every one-percent increase in the immigrant portion of low-skilled U.S. occupations reduces wages by about 0.8 percent. Should 15 percent of low-skilled jobs be held by foreign-born workers, it would reduce the wages of native-born American workers by perhaps 12 percent.

At current legal immigration rates, about one-in-six U.S. residents will have been born outside of the country by 2060, the Census Bureau has found. Today, the U.S. population has hit a record 331.9 million — driven mostly by legal immigration levels.