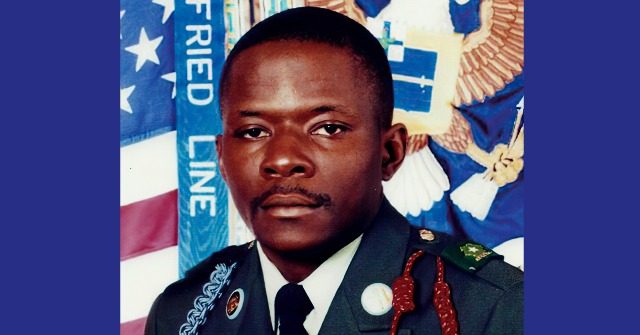 Army Sgt. First Class Alwyn Cashe was posthumously awarded the Medal of Honor on Thursday, becoming the first black American service member to be awarded the honor since the Vietnam War.

His sister, Kasinal Cashe White, however, said that most of the time, she does not like to focus on his race.

“Most of the time I don’t like it being said, ‘First African American’ — although I understand the significance,” she told reporters during a media roundtable hosted by the Army on Wednesday.

“I’m just glad that he’s receiving this honor. The fact that he happens to be African American is just a side note, because actually if you want to say anything, you’d say he was green, because he was Army,” she said.

She did say that she was pleased that her 15-year-old granddaughter told her she wanted to learn about her uncle for Black History Month next February. “She kind of brought me back to reality,” she said. “My brother will go down in history.”

Cashe White told Breitbart News that her brother’s life showed that, in America, anything is possible:

What this award means is that this kid — this little scrawny kid, [and] I wish I had pictures because he was scrawny, he was a little scrawny kid that I took care of, I walked to school on his first day of school, you know we were poor, but if a poor kid from Oviedo, Florida, can go after his dreams and make friends and make this happen, our nation’s highest honor, I can’t — if there was some limitation, there should be no stopping anybody — not in this country … especially a poor black kid, if he can do it, stop the excuses, let’s just do it. You know what I mean? That’s what it means.

Cashe White remembered having a drink with him before he deployed that last time to Iraq. She remembered him saying about deploying with his men, “I go where they go.”

He then coaxed her into having a drink with her. He said, “Well, have a drink with me and when I get back we’ll have another drink.”
At first, she refused because she had to go to church later, but he convinced her by saying, “Oh you can’t drink with your baby brother?”

“He would play that card with us all the time,” he said.

On October 17, 2005, as Cashe’s platoon was on a nighttime patrol in Iraq, their Bradley Fighting Vehicle hit an improvised explosive device (IED) and ignited. Cashe initially escaped the vehicle with minimal injuries, but he rushed back to the burning vehicle to pull seven of his men, not stopping even after his uniform — drenched in fuel — ignited in flames.

He refused to be medically evacuated until his men were. When he awoke in the hospital, his first words were, “How are my boys?” Cashe died from his wounds on November 8, 2005.

“He was a hero. He was a beloved son and brother. A proud husband and a father of three children,” President Joe Biden said at the Medal of Honor ceremony on Thursday at the White House.

“Alwyn Cashe was a soldier’s soldier. A warrior who literally walked through fire for his troops,” he said.

Cashe initially received a Silver Star, but his family, his former commander, lawmakers, and veterans from across the political spectrum pushed for it to be upgraded to the Medal of Honor.