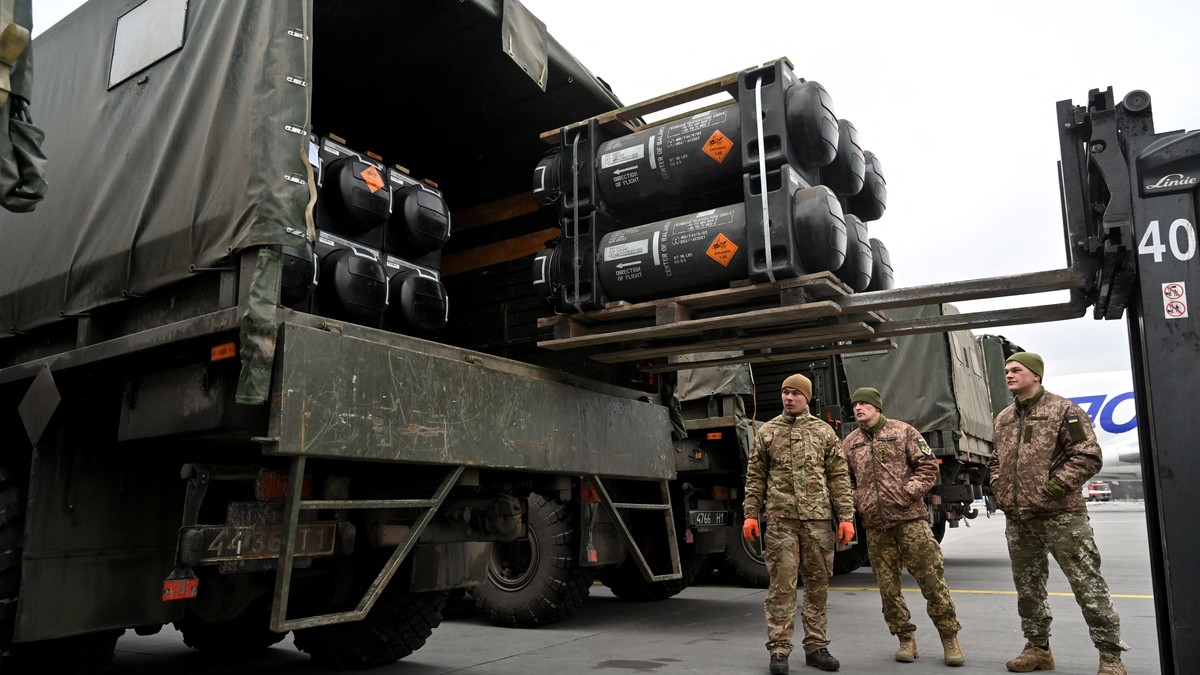 Ukrainian servicemen load a truck with the FGM-148 Javelin, American man-portable anti-tank missile provided by US to Ukraine as part of a military support, upon its delivery at Kyiv’s airport Boryspil on February 11,2022.  (Photo by SERGEI SUPINSKY/AFP via Getty Images)

With official confirmation from Western military officials that Russian troops have entered into the separatist-controlled parts of eastern Ukraine, questions in America have stirred: Is there anything the country can do to slow the advance of President Vladimir Putin’s forces into Donetsk and Luhansk? Will the U.S. government bog the nation down in yet another protracted foreign war? While the war paranoia has everyone from Cardi B to Stephen Colbert wondering about the fate of the world, President Joe Biden has been clear that no American troops will be sent to fight in any war in Ukraine.

The U.S. has a rich and nasty history of covert action programs, both recent and distant, secretly supporting one entity as its struggles against what the White House sees as a geopolitical enemy. For now, as the shooting and bombings haven’t started in earnest (though it has been happening at varying levels of intensity for eight years), the U.S.’ main moves will be about supporting the Ukrainian military with weapons and intelligence.

So far that has meant quantities of “lethal aid” as the Pentagon infamously described the help it sent to Ukraine earlier this year in preparation for any Russian invasion. It’s important to remember that this isn’t a new development: Besides the NATO training mission in Ukraine (involving multiple allies) schooling new Ukrainian recruits in modern warfare, the U.S. alone has provided $2.5 billion in military aid to Ukraine since the annexation of Crimea and the war in Donbas began in 2014.

The weapons of note in that most recent package were the Javelin anti-tank missile systems, the kinds that troops can wield easily in the field and while on foot. They’re important because any major Russian advance will likely include one of the biggest tank offensives in recent history. Stopping or slowing them down (or causing heavy casualties) would allow Ukraine to begin to create fears back in Russia that even if victory is in sight, it will prove costly. The same goes for the Stinger missile systems, which both the U.S. and other European allies have provided Ukraine: These weapons are ideal for point-and-fire downings of helicopters, which will undoubtedly be used en masse in any Russian invasion of Ukraine.

For its part, the Ukrainian military comprises roughly 250,000 soldiers and several thousands of armored vehicles and tanks, but its air force is nonexistent in comparison to Russia’s and its supply of attack helicopters is minimal. But Ukrainian soldiers have been fighting a war with Russian-backed separatists since 2014 in Donbas, which has mostly involved trench fighting (mortar attacks, shelling, and gunfights). That conflict has tested and trained soldiers in combat, which is an invaluable asset for any fighting force. Ukraine also has a decently trained special forces unit that has received Western instruction and is adept in covert actions of its own. While it will surely be rolled if Moscow decides to take the gloves off and attack Ukraine with all its military might, the Ukrainian military is a formidable war machine that’s also projected to cause thousands of Russian casualties.

One of the other great pieces of support the U.S. government is providing to Ukraine and the world is intelligence on Russian movements. (For now it appears the U.S. has only given declassified reports to Ukraine, though members of the Senate Intelligence Committee urged President Biden to share as much with Ukraine as is securely possible. Biden and President Volodomyr Zelenskyy speak regularly.)

While the human intelligence of the CIA and other branches of the U.S. government has been suspect of late, one thing Biden has touted since this crisis began is the confirmation of Russian troop movements and of the broad orders that deadlines for an invasion were imminent. Though there have been nebulous stories from reporters citing secret intelligence officials confirming a Russian attack was on the cusp of occurring, sinister surveillance powers aside, the NSA is effective at what it does. And when it comes to spying on Russia and infiltrating systems to glean broader information about Putin’s war plans, America’s signals intelligence spies have ways of accruing troves of important intercepts that other countries don’t, including Ukraine.

If the war kicks off as predicted, that intelligence relationship between the U.S. and Ukraine will need to continue, but it must be conducted securely and without leaks.

Of course, all the weapons and intelligence sharing in the world won’t likely prevent a defeat of the Ukrainian military should Russia decide to unleash total war on Ukraine. But that also won’t mean the American support for any Ukrainian government in exile (which could take up a home in nearby Poland) or most importantly, an insurgency, won’t occur either. In fact, back in January it was clear U.S. officials were already investigating ways to support an insurgency within Ukraine, which would reportedly involve the supply of weapons. The bitter irony is that the U.S. military just exited two decades of wars fighting insurgencies in both Iraq and Afghanistan, to embarrassing defeat, and once even accused Russia of offering the Taliban bounties for U.S. soldiers (which the Biden administration walked back as inconclusive intelligence).

Regardless of the U.S.’ inability to fight an insurgency, the tricks it has learnt from those losses and its historical fights might make the country a useful backer of insurgency in Ukraine. In fact, it has a precedent backing a ragtag force against a gargantuan Russian invader: During the Soviet-Afghan war in the 1980s, the CIA very successfully supplied the Mujahideen with a variety of weapons that helped turned the tide of the war and surged Russian casualties to a level the people back home could not stomach. And much of that was done with the help of Stinger missiles, which shot down countless Russian helicopters. (Worth noting: Those same Mujahideen did give birth to al Qaeda and subsequently the 9/11 attacks.)

If an insurgency did occur, Ukraine could pool from its over 250,000 current soldiers who survived the initial invasion or the estimated 300,000 veterans and hundreds of thousands of reservists, to help in its guerrilla war. Trained fighters, who can fade into civilian areas without detection, and the soldiering wherewithal to effectively attack an enemy is a bad recipe for an invading force. With Poland, a NATO member and veritable intelligence and military force right beside it (which maintains unusually close ties to the CIA), cash, weapons, and training could easily be supplied.