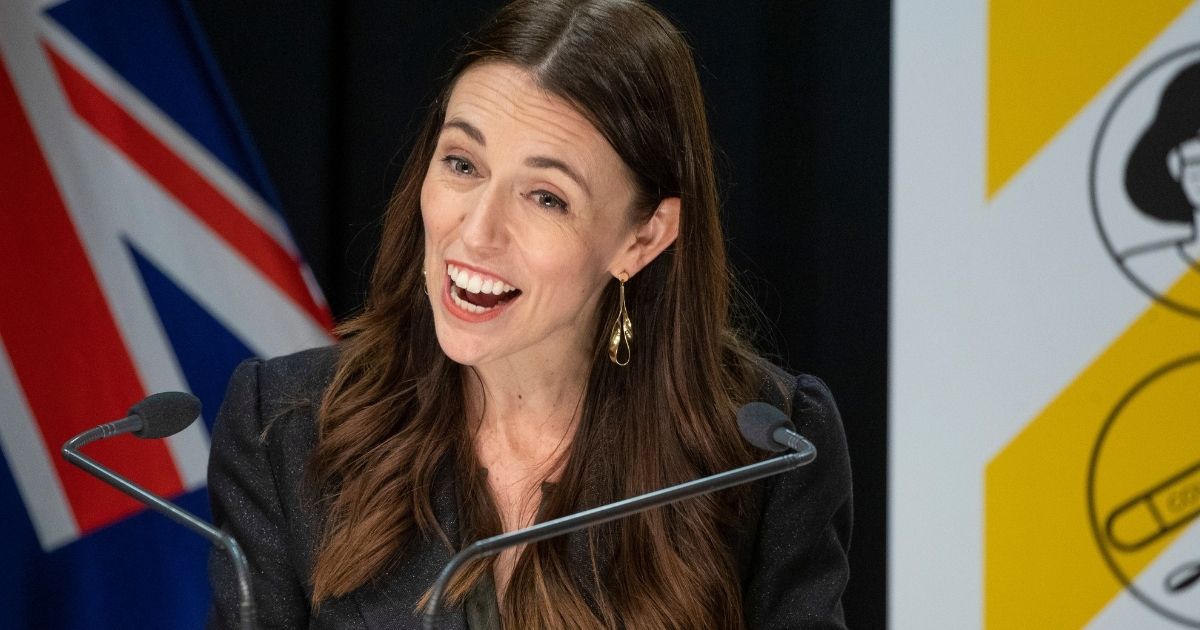 For those who believe that a strong, wily leader willing to impose strict measures on the nation they govern could have stopped the COVID-19 pandemic in its early stages, New Zealand Prime Minister Jacinda Ardern is essentially the Platonic form of this leader.

Ardern’s ridiculous lockdown and quarantine measures are credited with New Zealand only having 52 deaths from the virus, according to The Associated Press. This is, admittedly, an impressive number.

Consider how Ardern’s government achieved it, however: It’s reportedly safer and easier for an unmarried, pregnant New Zealand journalist who has criticized the Taliban’s treatment of women to seek refuge in Afghanistan than it is for her to return to her home country.

New Zealand’s COVID craziness mirrors that of its neighbor Australia. The Western Journal has been highlighting the egregious abuses by authorities there and elsewhere — and will continue to do so. You can help us in our fight by subscribing.

Charlotte Bellis, a journalist for Al Jazeera, wrote in a column for the New Zealand Herald published Friday that, after returning from Afghanistan to Al Jazeera’s home base in Doha, Qatar, in September, she discovered she was pregnant by her partner, a New York Times photographer who was still in Kabul.

Bellis was told she couldn’t have children by her doctor, so she was shocked. This presented a problem, however: It’s illegal to be pregnant and unmarried in Qatar. When Bellis asked her gynecologist whether her she would notify the police, she was told, “I won’t, but I can’t treat you, and I can only say you need to get married or get out of the country as soon as possible.”

The first option wasn’t possible with her partner in Kabul. Thus, she tried to get a spot in what’s known as MIQ, or Managed Isolation and Quarantine — New Zealand’s overwhelmed system through which Kiwis can request to return home from abroad and enter a quarantine center.

“I immediately started playing the MIQ lottery, waking up at 3am and staring at my computer, only to miss out time and again,” Bellis wrote.

“I resigned from Al Jazeera in November, losing my income, health insurance and residency. I can’t tell you the number of questions I got: Why now? Why are you leaving? It doesn’t make sense? I clearly wasn’t very convincing in my ‘just time for a change’ answers.

“Then, some relief. The Government announced that New Zealand would open to citizens at the end of February,” she continued. “The timing was perfect. I would be 29 weeks pregnant and could get back in time for our little girl’s birth in May. Foreigners would be allowed in from the end of April, so Jim could be there for the birth too. We booked flights home and found a midwife in Christchurch.”

Where could they wait until February, though? They tried Belgium, her husband’s native country, but New Zealanders can only spend a limited amount of time there. The only other country both had visas for was Afghanistan, since they had covered the withdrawal chaos. She organized a meeting with senior Taliban officials, explained her predicament and asked if there would be any legal issue if the couple came back — even though she was pregnant and they were unmarried.

“No we’re happy for you, you can come, and you won’t have a problem. Just tell people you’re married, and if it escalates, call us. Don’t worry. Everything will be fine,” the officials said.

“When the Taliban offers you — a pregnant, unmarried woman — safe haven, you know your situation is messed up,” Bellis wrote. This is doubly true when you consider she’s best known for asking Taliban officials, during their first news conference after the fall of Kabul, “What will you do to protect the rights of women and girls?”

Then the February border reopening was “delayed,” meaning Bellis had to apply for an emergency MIQ spot. With letters from obstetricians in New Zealand citing the dangers of giving birth in Afghanistan, documents detailing their relationship and finances, their vaccination status and their travel itinerary over the past few months, you would figure they would easily qualify. You’d be wrong.

“On Monday, 24 January, we woke up to an email. We were rejected,” she wrote. “Firstly, because our travel dates were more than 14 days out — something we did purposefully because flights are difficult to get out of Kabul and to give us time to appeal if we were rejected. And secondly, because MIQ said ‘you did not provide any evidence’ that ‘you have a scheduled medical treatment in New Zealand,’ that it is ‘time-critical’ and that ‘you cannot obtain or access the same treatment in your current location.’

Even though flights out of Kabul are difficult to get, Hipkins insisted “the travel must be time-critical” and said the government sent her a letter “inviting her to reapply within the 14 day window, and to contact MIQ if she intended to change her flights to return to New Zealand earlier.”

Not that this meant she’d get a spot in MIQ after reapplying or moving her flights forward.

“We have a team of people who manage emergency allocation requests, and the team keep a close eye on applications, and Charlotte’s location of Afghanistan came to their attention. Thirty minutes after the initial decline email, they reached out to inform her that if she intended to change her flights to an earlier return date, that more supporting information would be required to process a subsequent application, and they highlighted the evidence requirements,” Hipkins wrote.

“This is not uncommon and is an example of the team being helpful to New Zealanders who are in distressing situations.”

This is Jacinda Ardern’s COVID response minister describing how his government is being “helpful” to an unmarried, pregnant woman in the Taliban’s Afghanistan, a country that was already near the bottom of the Human Development Index list before the U.S.-backed government fell last August. He or someone close to him wrote this, proofread it to see how it sounded, then fired it off to the New Zealand Herald under the impression it put his government’s actions in a favorable light. I can append no comment that can properly do that logic justice.

“Every month in managed isolation we accommodate the equivalent of a small New Zealand town — around 12,600 people in 9,000 rooms per 28 days,” Hipkins continued. “There is finite capacity within the MIQ system though, and that’s for good reason — Covid-19 is still spreading around the world, and we need to keep New Zealand safe. We constantly have to strike a balance between bringing people into New Zealand and protecting us all from Covid entering the community.”

There you have it: They’re more frightened a New Zealand citizen carrying a child outside of wedlock in the Taliban’s Afghanistan might bring COVID into the country than they are about her situation. Hipkins claims this is because they “need to keep New Zealand safe.”

Notice the language there: They’re not aiming to keep New Zealanders safe, just New Zealand. They worship numbers and ignore the lives behind them.

There’s a happy-ish ending here — which, sadly, doesn’t involve Ardern’s apparatchiks coming to their senses. On Sunday, the Herald reported Bellis had been granted asylum in another country, although the reporter and her representatives are keeping it confidential.

“It’s really sad. I’ve been so proud for so long of being a New Zealander, at the beginning of the pandemic,” Bellis told the Herald from Kabul. “We look after each other, we’re empathetic, we get stuff done. It just feels like such a breach of trust. I’m one of your people, and I need help.”

And the Taliban provided it when New Zealand couldn’t — proof of how deeply the talons of the secular religion of safetyism have sunk into the minds of Prime Minister Ardern and her acolytes.

But it has to be working, right? Only 52 deaths in New Zealand; that’s not even triple digits. Shame about that journalist, though.