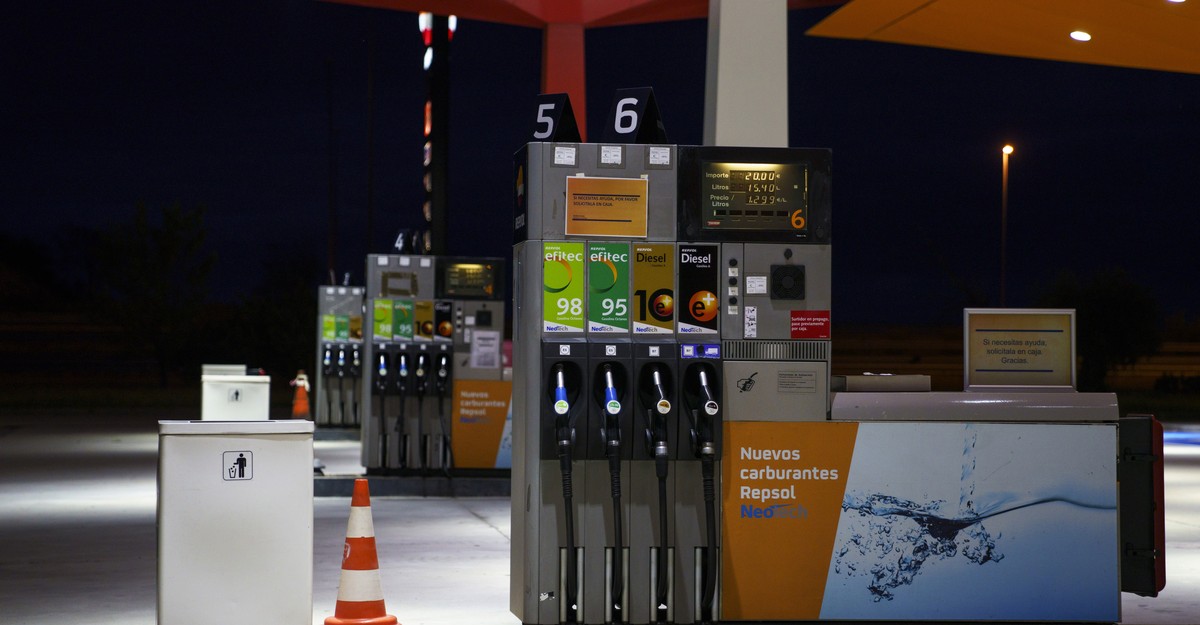 Some commentators are comparing the current Russian aggression against Ukraine to Hitler’s invasion of Poland in August 1939. Here’s another analogy that could be more accurate: In 1979, upheavals in the Middle East sent energy prices soaring—and Western economies tumbling.

Russia is the world’s No. 3 exporter of oil, and its No. 2 exporter of natural gas. If Western countries respond to Russia’s invasion by imposing sanctions, Russia’s obvious countermove is to retaliate by cutting back fuel sales.

Such a move would hurt Russia too. But Vladimir Putin has carefully prepared for the shock—and of course Russian citizens have learned that it’s dangerous to complain.

The state of the energy market provides much of the answer to the “Why now?” questions about Putin’s timing. Donald Trump supporters like to argue that it was their guy’s manic unpredictability that deterred Putin from invading in 2018 or 2019. That claim was smashed to pieces yesterday when Trump praised the invasion as “genius” and “savvy.”

The real explanation for Putin’s timing is the slackness of the world energy market in the late 2010s—and its new tightness in the 2020s. From mid-2014 until the onset of the global pandemic in 2020, Russian gas sold for less than $10 per million metric British thermal units, often for under $5.

But the gas market is inescapably cyclical. The low prices of the 2010s discouraged investment in new supply, setting the conditions for higher prices in the 2020s. As the world economy began to recover from the early pandemic, so did the price of gas. The price of Russian gas on spot markets surpassed $10 per million metric BTUs in June 2021, then $15, then $20; it’s now about $30.

Daniel Yergin: Why the energy transition will be so complicated

The higher prices enabled Russia to build massive holdings of dollars, euros, and gold. Those holdings now exceed $630 billion, an impressive stash for a country with a GDP of only $1.5 trillion.

In 2017, 2018, and 2019, Russia’s dominance over its gas customers in Western Europe was weaker, and its financial resources to endure market disruption were fewer. In 2022, Russia’s power over its gas customers is at a zenith—and its financial resources are enormous. Putin has been building to this crisis for a long time, and Trump’s contempt for NATO and hostility to European allies were exactly the help Putin required at the time he required it.

Now we have arrived at an impasse where Russia could inflict real havoc on world energy markets, if it chooses.

One gas-industry insider, speaking on the condition of anonymity in order to talk candidly, predicted that if gas prices stay high, European economies will shrink—and Russia’s could grow—to the point where Putin’s economy will overtake at least Italy’s and perhaps France’s to stand second in Europe only to Germany’s.

Uncertainty has already driven the price of oil almost all the way to $100 a barrel. If Russia cuts back exports, the price could rise much higher. Any Russian retreat from world oil markets will jolt prices in ways that will be felt at gas pumps around the world. The price of regular gasoline in the U.S. now averages $3.53 a gallon, up from $3.32 a month ago and from $2.63 a year ago. It would not take much of an additional squeeze to drive the price past the all-time-record average of $4.11 set in 2008. (This number is not quite the all-time record if adjusted for inflation, but it’s not much lower than the 1970s peaks, either.) Higher fuel prices will feed through to higher prices for almost everything else.

Oil at least is bought and sold in well-functioning global markets. There are lots of suppliers who can increase production, some quicker, some slower. Gasoline is heavily taxed, so governments can offer temporary relief with tax holidays. And the U.S. commands a huge strategic oil reserve that can be drawn down: still nearly 600 million barrels, according to the most recent figures, despite the sale of tens of millions of barrels over the past six months.

Natural gas, though, is harder to substitute. Oil can be loaded onto a tanker and shipped to any port in the world. The cheapest way to move gas, however, is by fixed pipelines. For Europe, those pipelines connect above all to Russia. Pre-pandemic, Western Europe imported almost 40 percent of its natural gas from Russia.

Russian pipeline gas could theoretically be partly replaced by liquid natural gas from Qatar, the United States, or other suppliers. But ramping up LNG production and shipment is very difficult to do in a hurry. Gas is compressed into liquid in sophisticated facilities that cost many billions of dollars to construct. Because those facilities cost so much, their builders look to sell their output to long-term contracted customers. While Europe was doing deals with Russia, Chinese buyers booked most of the planet’s LNG capacity. In 2021, China took the top spot as the world’s largest importer of liquid natural gas. China now buys more than one-fifth of all the liquid natural gas produced in the world, 79 million out of 380 million metric tonnes.

The U.S. government has made a huge effort in recent weeks to redirect liquid gas to European customers. But there are inescapable economic, legal, and logistical limits to any redirection, even assuming that Asian contract-holders are willing to cooperate. Everything becomes even more intractable if Asian contract-holders refuse.

The outlook then is for shocks and disturbances in the global energy market. Fortunately, winter is nearly over in Europe, so demand for heating gas will decline. But gas has uses in industry, agriculture, and electricity generation that do not decline as the weather warms.

It took years of feckless decision making to bring the market to this state. It will take many years—and billions of dollars, euros, and pounds of investment—to remedy the situation. The cancellation of the Nord Stream 2 pipeline is a painful first step: billions of euros wasted for a project Russia wanted so that it could sell gas to Germany and other European markets while bypassing and isolating Ukraine and Poland. Even more challenging steps await ahead.

Europe and the United States must add new nuclear and renewable electrical-generating capacity. Europe will need new pipelines under the Mediterranean to expand natural-gas imports from North Africa and new fields off the coasts of Israel and Egypt. Europe will have to build new facilities to receive liquid natural gas—and the U.S. and others will have to expand their ability to produce and ship liquid natural gas around the globe. All of us in the developed world will have to accept the enduring reality of higher natural-gas prices to entice new production from non-Russian gas suppliers. None of that can happen in the next 90 days.

If Russia escalates its aggression—and forces the severe Western response threatened by NATO leaders—what’s ahead for users of natural gas, and the world economy, will hurt everybody. Europe might well tip into recession. The United States could possibly follow. Western leaders need to communicate the facts and prepare public opinion in their countries for higher prices and tougher times. Democratic publics will bear sacrifices for important causes. But democratic publics bear those sacrifices more patiently when they understand what is happening and why.