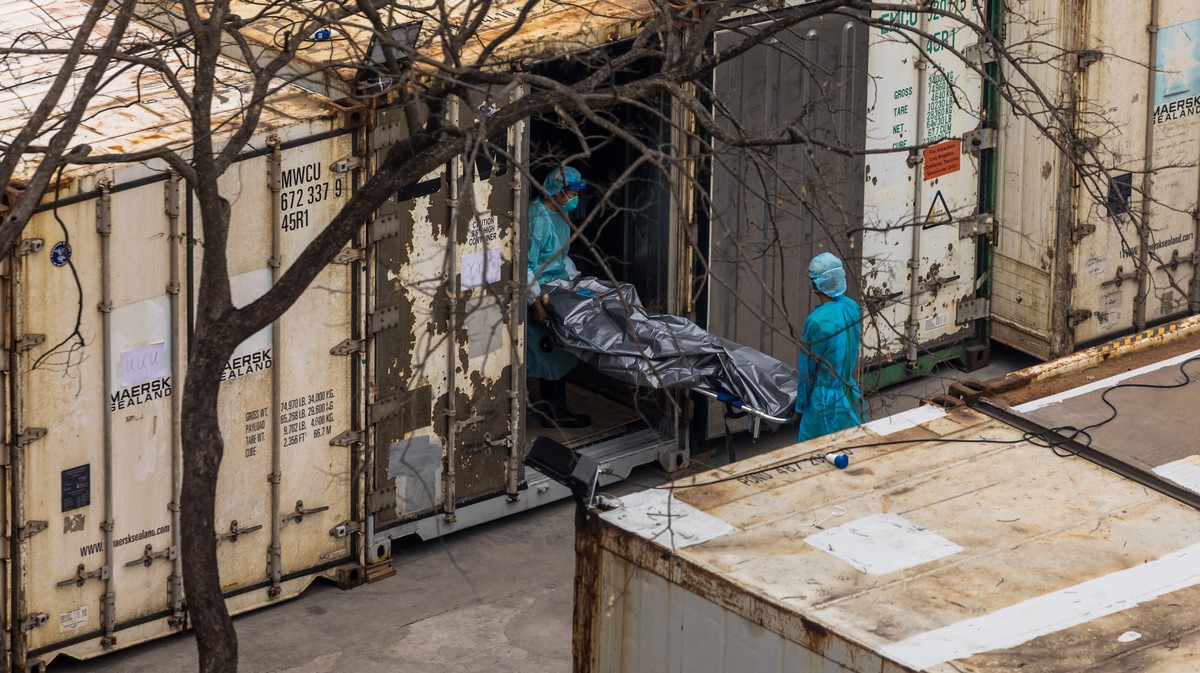 From overwhelmed hospitals to overflowing morgues, the scenes from Hong Kong’s COVID-19 crisis were strikingly similar to those that unfolded around the world in the early months of the pandemic.

Except that for the wealthy city of 7.5 million people, the sight of bodies piling up in hallways and around patients in hospitals emerged only this month, a year after vaccines against the virus became widely and freely available in the territory.

In a matter of weeks, the contagious Omicron variant of the virus has infected more than 1 million people and caused more than 5,000 deaths, mostly among unvaccinated, elderly people.

The city is now reporting more COVID-19 deaths every day than it did over the first two years of the pandemic. The surge this month has driven the city’s coronavirus death rate—36 per one million people on Sunday—to being the highest in the world.

But more than its ferocity, this wave of outbreak has stood out for how preventable it was, experts say.

“This is an expected tragedy,” said Jin Dong-yan, a virologist from the University of Hong Kong. “We have appealed to the general public and the government again and again in the past one year—we need to vaccinate the elderly.”

More than 70 percent of Hong Kong’s COVID-19 fatalities were people aged 80 and older, many of whom lived in elderly care homes. The same age group was the least vaccinated at the outset of the current wave of infections, with less than one in five people fully vaccinated.

In comparison, the overwhelming majority of elderly people are fully vaccinated in countries such as South Korea, Singapore, New Zealand, and the United States.

There’s not a single or simple explanation for why older people in Hong Kong were reluctant to get jabbed. Karen Grepin, a public health expert at the University of Hong Kong, said misconception about safety was one big reason.

“Because of this concern over safety, which is reinforced by the media and the health system, we created this idea that you really have to be healthy or fit to be vaccinated,” she said. “We end up with this unusual pattern in which people who most need vaccination are amongst those least likely to get it.”

“I shudder every time I hear the sirens of the ambulance.”

With a chronic kidney disease and regular chest pains, 62-year-old Amy Tsang is among those with underlying conditions and therefore deemed at heightened risk from getting very sick from COVID-19. But the retiree has put off vaccination for months, precisely out of fear that her body, weakened by years of steroids use, would not be able to cope with the side effects.

“I wanted to wait till my body was stronger. But that day never seems to come,” said Tsang, who cooped up at home to avoid catching the virus. “I shudder every time I hear the sirens of the ambulance. It feels like the Grim Reaper walking past.”

One factor that contributed to the deadliness of COVID-19 among seniors in Hong Kong was their choice of vaccines. While effective, the Chinese-made Sinovac vaccine favored by the city’s elderly population has proved to be less protective compared to the BioNTech-Pfizer vaccine if only two doses of either brand are administered.

A recent Hong Kong University study of local cases found that the BioNTech shots were 89.6 percent and 92.3 percent protective against severe illness and death, respectively, among those aged 60 and older when two shots are given. For the Sinovac shots, those figures were 72.2 percent and 77.4 percent, respectively.

The study also found that both vaccines are almost equally capable of preventing severe illness and death if three doses are administered. However, despite the recent increase in vaccine uptake, only about one in ten Hong Kongers aged 80 and older have received three doses of any COVID-19 vaccine.

Hong Kong’s abrupt turnaround could hold lessons for mainland China, where only half of those aged 80 and older are fully vaccinated against the virus.

Most of China’s 1.4 billion people do not have immunity from previous exposure to the virus and only received inactivated virus vaccines, which have proved to be less protective than mRNA shots like those made by Pfizer and Moderna.

Beijing is certainly taking notes. Having sent experts to Hong Kong and witnessed its devastation firsthand, mainland health officials have urged seniors to get vaccinated. Wang Hesheng, vice minister of the National Health Commission, said on Friday the outbreak in Hong Kong “taught us a particularly profound lesson.”

China must hurry up and vaccinate its population or “we will regret it,” Wang told reporters in Beijing. Overall, 87.9 percent of the Chinese population have received two vaccine doses, a relatively high level of uptake, although the number drops among older citizens.

Mainland China is also grappling with its worst COVID-19 spikes in cases since the early days of the pandemic. Thousands of daily new cases reported in several parts of the country this month prompted authorities to impose lockdowns last week that affected 51 million people. Over the weekend, China reported its first COVID-19 deaths in more than a year.

Boosting vaccination rates would be important for China if it ever wants to relax its social distancing and border control measures.

In Hong Kong, where COVID-19 deaths have come down from their peak last week, the government on Monday announced a road map for easing some of its most stringent rules on gathering and travel as frustration from the public and business sector mounted.

The city’s leader, Chief Executive Carrie Lam, has said nothing to suggest that the city would scrap its strict “zero-COVID” strategy and plan for a future with an endemic virus. But as Omicron has shown, it may not have a choice.