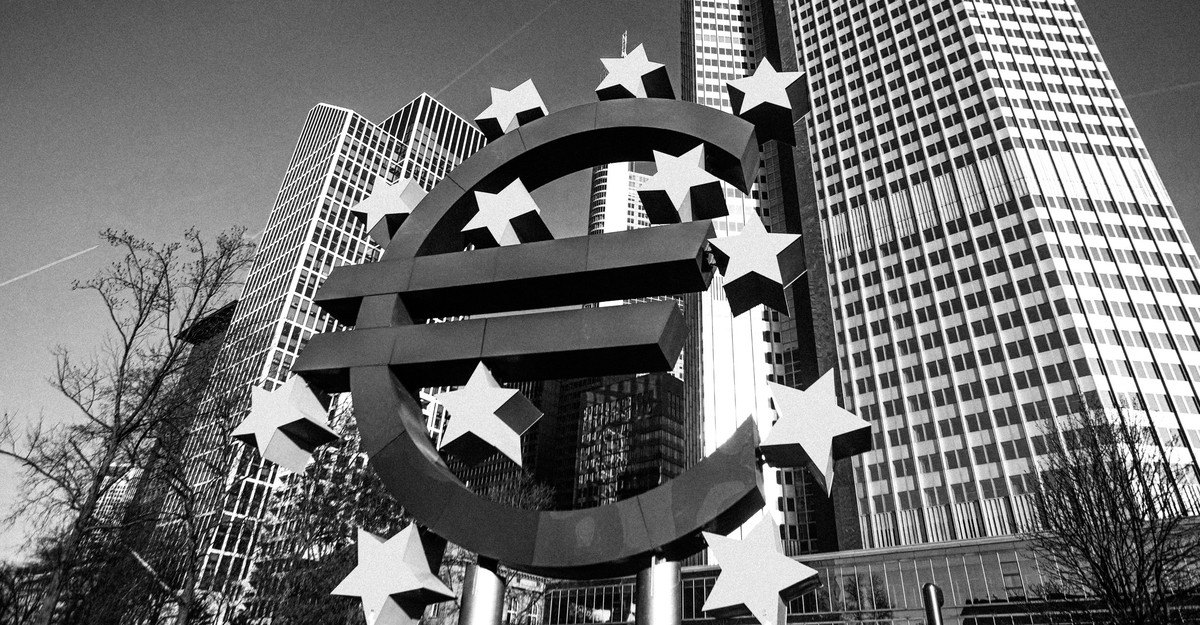 The EU Commission announced this afternoon that the European Central Bank will deploy its most powerful financial weapon against Russian aggression. Several hours later, Secretary of State Antony Blinken announced that the Federal Reserve will impose sanctions of its own upon the Russian central bank.

Central-bank sanctions are a weapon so devastating, in fact, that the only question is whether they might do more damage than Western governments might wish. They could potentially bankrupt the entire Russian banking system and push the ruble into worthlessness.

Russia is also being hit by a partial cut-off from the SWIFT system. SWIFT is a messaging technology based in Belgium that allows banks to talk to one another in secure ways, enabling the safe and sure electronic transmission of funds. SWIFT is not a bank, nor is it exactly a payments system. It is instead a way to guarantee that money moves where it is supposed to go. Countries cut off from SWIFT, as Iran was in 2012, are effectively cast back into the precomputer era—forced to rely on primitive barter transactions, or Breaking Bad–style pallets of physical cash, to fund their governments and their economies.

Details are still pending about the Western central-bank sanctions. To better understand the possibilities, I spoke with Michael Bernstam, an economist and Soviet-born analyst at Stanford’s Hoover Institution. Bernstam has studied the potentially decisive impact of such sanctions since the prior Russian invasion of Ukraine, in 2014.

Bear with me as I walk you through some banking and currency technicalities. I promise the destination will be worth the trouble.

Suppose you are a Russian company that buys things from the outside world and sells them to Russians. You earn your income in rubles. You spend in euros, U.S. dollars, British pounds, Japanese yen, South Korean won, or possibly Chinese renminbi. How does that work, exactly?

Most of these conversions from rubles into foreign currency take the form of computer clicks that credit or debit the electronic ledgers of financial institutions. The deposit of rubles into a bank is a click. The sale of rubles for euros or dollars is another click. The arrival of the foreign currency into the Russian customer’s account is only one click more. Very seldom does any actual paper money change hands. There’s only about $12 billion of cash dollars and euros inside Russia, according to Bernstam’s research. Against that, the Russian private sector has foreign-currency claims on Russian banks equal to $65 billion, Bernstam told me. Russia’s state-owned companies have accumulated even larger claims on Russia’s foreign reserves.

Despite the relative scarcity of physical foreign currency inside Russia, all of these clicks can happen because Russians generally have confidence that their banks could pay foreign cash if they had to. If every Russian depositor—individual, corporate, state-owned—showed up at the same time to claim their dollars and euros, you’d have a classic bank run. But Russians don’t run on their banks, because they believe that in a real crunch, the Russian central bank would provide the needed cash. After all, the Russian central bank holds enormous quantities of reserves: $630 billion at the last tally before the start of the current war on Ukraine. In an emergency, the central bank would draw upon its reserves, provide cash to the commercial banks, and every depositor could be paid in full in the currency promised. With $630 billion in reserves, there is no way Russia would ever run out of foreign currency. You’ve probably read that assertion many times in the past few days. I actually wrote such an assertion myself in an article published last week.

Not so fast, argues Berstam. What does it mean that Russia “has” X or Y in foreign reserves? Where do these reserves exist? The dollars, euros, and pounds owned by the Russian central bank—Russia may own them, but Russia does not control them. Almost all those hundreds of billions of Russian-owned assets are controlled by foreign central banks. Russia’s reserves exist as notations in the records of central banks in the West, especially the European Central Bank and the Federal Reserve. Most of Russia’s reserves are literally IOUs to the Russian central bank from Western governments.

Remember the saying “If you owe the bank $10,000, you have a problem—but if you owe the bank $10 billion, the bank has a problem?” We, the people of the Western world collectively owe the Russian state hundreds of billions of dollars. That’s not our problem. That’s Russia’s problem, an enormous one. Because one thing any debtor can do is … not pay when asked.

To finance its war on Ukraine, Russia might have hoped to draw down its foreign-currency reserves with Western central banks. The Russian central bank would tell the Fed or the ECB to credit X billion dollars or euros from the Russian central bank to this or that private Russian bank. That bank would then credit the accounts of Russian businesses or individuals. Those businesses or individuals would then pay Western companies to whom they owe money.

All of this requires the cooperation of the Fed or ECB in the first place. The Fed or ECB could say: “Nope. Sorry. The Russian central bank’s money is frozen. No transfers of dollars or euros from the Russian central bank to commercial banks. No transfers from commercial banks to businesses or individuals. For all practical purposes, you’re broke.” It would be a startling action, but not unprecedented. The United States did it to Iran after the revolutionary regime seized U.S. diplomats as hostages in 1979.

Iran did not feel that freeze, however, because it was earning massive amounts of new foreign currency from oil sales. But if Russia’s foreign income slows at the same time as it is waging a hugely costly war against Ukraine, it will need its reserves badly. And suddenly, it will be as if the money disappeared. Every Russian person, individual, or state entity with any kind of obligation denominated in foreign currency would be shoved toward default.

Of course, long before any of that happened, everybody involved in the transactions would have panicked. Depositors would race to cash out their dollar and euro holdings from Russian banks, the Russian banks would bang on the doors of the Russian central bank, the Russian central bank would freeze its depositors’ foreign-currency accounts. The ruble would cease to be a convertible currency. It would revert to being the pseudo-currency of Soviet times: something used for record-keeping purposes inside Russia, but without the ability to buy goods or services on international markets. The Russian economy would close upon itself, collapsing into as much self-sufficiency as possible for a country that produces only basic commodities.

Russia imports almost everything its citizens eat, wear, and use. And in the modern digitized world, that money cannot be used without the agreement of somebody’s central bank. You could call it Berstam’s law: “Do not fight with countries whose currencies you use as a reserve currency to maintain your own.”

There is one exception to the rule about reserves as notations: About $132 billion of Russia’s reserves takes the form of physical gold in vaults inside Russia. Russia could pledge that gold or sell it. But to whom? Most potential customers for Russian gold can be threatened with sanctions. Those who might defy the threat couldn’t afford to take very much: The entire GDP of Venezuela, for example, is only about $480 billion.

Only one customer is rich enough to take significant gold from a sanctioned nation like Russia: China.

Would China agree to take it? And if China did agree, would it not demand a big and painful discount for helping out a distressed seller like a sanctioned Russia? How exactly would the transaction occur? Would China be content merely to take legal ownership of the gold and leave the metal inside in a Russian vault? Doubtful. One ton of gold is worth about $61 million, so $139 billion would weigh about 2,290 metric tons. It’s certainly conceivable for a locomotive to pull a train of that weight from Moscow to Beijing. But it would constitute a considerable logistical and security undertaking to load, move, unload, and secure the gold for a train trip across Siberia.

Read: Is Taiwan next?

What would be accomplished by such a move? Russia already has $84 billion of assets denominated in Chinese renminbi. If Chinese-denominated assets were of any real use to Russia, Russia would not need to sell the gold to China in the first place. Russia’s renminbi reserves can certainly be used to buy things from China. But that does not solve the real problem, which is not to buy specific items from specific places, but to sustain the ruble as a currency that commands confidence from Russia’s own people. China cannot do that for Russians. Only the Western central banks can.

And here we bump into the limits of central-bank sanctions as a financial weapon: A weapon that altogether crushes an adversary’s banking system may be just a little too powerful. The West wants to administer penalties that cause Russia to alter its aggressive behavior, not to crush the Russian economy. The central-bank weapon is so strong that it might indeed provoke Putin into fiercer aggression as a desperate last gamble. So the next question is: Is there any way to use the central-bank-sanctions weapon more incrementally?

Perhaps there is. Western banks do not need to freeze the Russian central bank’s accounts altogether. They could put the Russian central bank on an allowance, so many billions a month. That would keep Russia limping along, but under severe restraint—asphyxiation rather than sudden strangulation. The West could not prevent Putin from spending foreign currency on his war or favoring cronies in the distribution of foreign currency. But the restraint would rapidly make the terrible cost of Putin’s decisions much more rapidly visible to every power sector in Russian society. It’s not the full blow, but it might hurt enough—and of course, the full blow could be applied later.

The central-bank-sanctions tool will also deliver a humbling but indispensable lesson to Putin. Putin launched his war against Ukraine in part to assert Russia’s great-power status—a war to make Russia great again. Putin seemingly did not understand that violence is only one form of power, and not ultimately the most decisive. Even energy production takes a country only so far. The power Putin is about to feel is the power of producers against gangsters, of governments that inspire trust against governments that rule by fear. Russia depends on the dollar, the euro, the pound, and other currencies in ways that few around Putin could comprehend. The liberal democracies that created those trusted currencies are about to make Putin’s cronies feel what they never troubled to learn. Squeeze them.